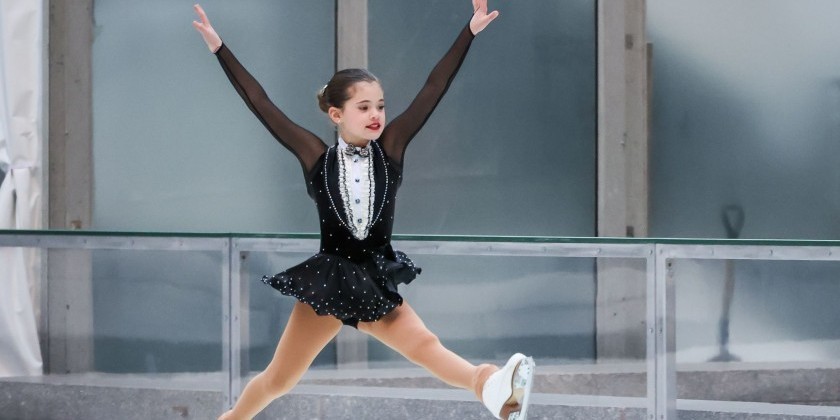 The Rink at Bank of America Winter Village at Bryant Park

Performing apprentice Ella Bauer skates to "Putting on the Ritz," choreographed by coach Tanya Douglass. With big dreams for a nine-year-old, Ella is aiming for the Olympics in 2030.

Professional soloist Val Levine will perform Arctic Memory, a visually beautiful piece and environmentally conscious creation about Global Warming by dance choreographer Jody Sperling. This version of Arctic Memory is adapted from material Sperling developed during a 43-day polar science mission to the Arctic. The costume is a long cape, hand-painted with designs suggestive of Arctic pack ice melting and the sound scape is taken from the actual sounds of the Arctic ice pack moving as it melts. The work also draws inspiration from modern-dance pioneer Loïe Fuller (1862-1928).

Gage and Oona Brown will perform their competitive free dance choreographed by Joel Dear, which just last month won them the Silver medal at the US National Junior Ice Dance Championships. Coached by Inesa Bucevica and Joel Dear, they skate to "Nothing Else Matters" by Metallica, Marlisa Punzalan and Los Últimos Románticos.

About Ice Theatre of New York

ITNY's mission is to celebrate and advance dance on ice as a performance art. Through its performances in both traditional and site-specific venues, ITNY presents ice dance that helps to open ones eyes to seeing skating in new and unexpected ways. ITNY was the very first ice dance company to receive dance program funding from the National Endowment for the Arts, the New York State Council on the Arts and the New York City Department of Cultural Affairs.

VALERIE LEVINE has been dancing tap, jazz and ballet since she was 4 years of age and started roller-skating at that time. After begging her parents for figure skating lessons, she started training at 11. She auditioned for Disney On Ice during high school and was accepted but decided to get her bachelor's degree in college rst. She went on to get her Senior Ladies Moves and Pre-golds in ice dance by 19 and skated as an ice girl for the NHL teams the New York Rangers and the New York Islanders during those years. She furthered her dance knowledge while in college getting her Bachelor's Degree in Product Management Textiles from the Fashion Institute of Technology. She minored in dance and trained at the Broadway Dance Center in many dance styles, which led her to her current career as a professional belly dancer, ballroom dancer, Brazilian samba dancer, re performer and the like. Valerie has collaborated on ITNY events for the past decade. More at Valerinadance.com.

A dancer-choreographer from New York City, JODY SPERLING is the Founder and Artistic Director of Time Lapse Dance. She has created 40-plus works, including many furthering the legacy of modern dance pioneer Loie Fuller (1862-1928). Considered the preeminent Fuller stylist, Sperling has expanded the genre into the 21st century, deploying it in the context of contemporary performance forms. She has been nominated for a 2017 World Choreography Award for her work on the French feature lm "The Dancer" (which premiered at the 2016 Cannes Film Festival), inspired by Fuller's life. Years of working in Fuller's idiom, which involves kinesphere-expanding costumes, has influenced Sperling's aware- ness of the body's relationship with the larger environment. In 2014, she participated in a polar science mission to the Arctic as the rst, and to date only, choreographer-in-residence aboard a U.S. Coast Guard icebreaker. During the expedition, she danced on Arctic sea ice and made the short dance film "Ice Floe," winner of a Creative Climate Award. Sperling's current projects focus on using visual-kinetic narratives to connect choreography and climate science.

SALLY JEANNE WATKINS is a U.S. Figure Skating triple gold medalist and holds an Intercollegiate National Senior Ladies title. While Sally enjoys skating professionally, she also loves coaching and exploring the aerial arts. She earned her Bachelor's in Engineering-Physics and Chemistry from Miami University and her Master's in Environmental Engineering from NYU. Originally from Seattle, Washington, she currently lives in New York City. Sally has been performing with ITNY since 2012.

DOUGLAS WEBSTER has been involved in figure skating since he grew up in North Conway, New Hampshire. He is a graduate of The College of William and Mary in Williamsburg, VA. From 2011-2014 Douglas served as the Artistic Director of Ice Theatre of New York (ITNY). Since 1991, he worked with ITNY as Associate Artistic Director, Resident Choreographer and Ensemble Director. In addition to his current work with Ice Dance International as Founding Artistic Director and Choreographer, Douglas served as the Creative Director for Shall We Dance on Ice, a Disson special that airs on ABC and features ice dancing and ballroom. Douglas has choreographed for many skating companies in the world including Disney on Ice, Stars on Ice and Holiday on Ice; he serves on the board of the Young Artists Showcase and is on the staff of "Grassroots to Champions." He is also the Artistic Director of Labrie Family Skate at the Strawberry Banke Museum in Portsmouth, NH, where he implemented IDI's outreach program, "Get Out and Skate" with the public schools.