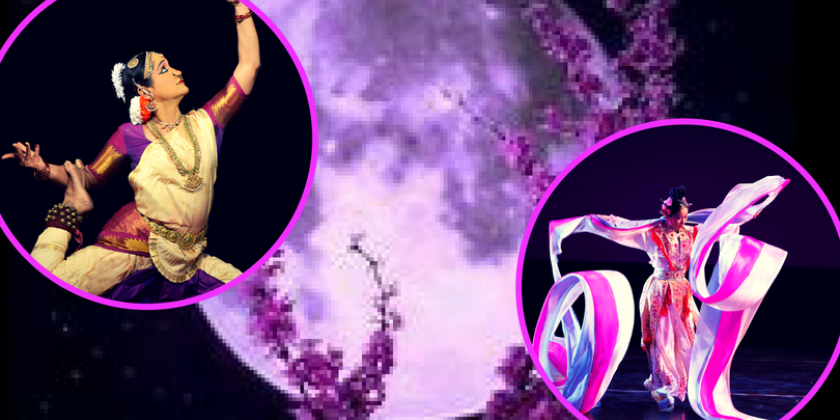 The Nai-Ni Chen Dance Company will open this new 2019 season with a theme of collaboration and outreach, especially with other diverse, immigrant women choreographers from Asia.  The first major event of the Company will be a celebration of the Moon, a collaboration with the Jersey City arts venue, the White Eagle Hall of the Jersey City Theatre Center that opened in 2013, and have been one of the most popular spots for dance in the diverse city.  The Moon, in Asian traditions, represents the power of the feminine, the family and a source of healing and strength. The concert at the White Eagle Hall will emphasize on these qualities that women bring to the world. Ticket for the festival can be obtained online at: http://www.ticketfly.com/event/1748984.

For this concert, Nai-Ni Chen celebrates the power of sisterhood in collaboration with the acclaimed Bharatanatyam dance master Akhilandeshwari Vasudevamurthy (Akhila) to create a culturally rich Asian American festival that celebrates diversity and womanhood at this historic moment in history where the society is beginning to pay attention to women and girl's stories.  The two choreographers will each present dances that relate to the Moon and invite the audience to join them in the celebration. Akhila and her husband Chetan Hebbar will celebrate the Karva Chauth and Nai-Ni Chen will celebrate the Moon Festival.

For this occasion, the Nai-Ni Chen Dance Company will be presenting some of its most celebrated dances:

Akhilandeshwari Vasudevamurthy will be presenting some rarest compositions in Bharthanatyam style

Aside from dances, the festival will also include tasting of the Moon cake, a special food for the Moon Festival as well as Indian Pudding

About Moon Festival and Karva Chauth

Moon Festival is celebrated in China, Korea, Vietnam, Laos, Malaysia, Philippines and Singapore.  It is the second largest holiday for the Chinese people around the world, occurring on the 15th of the eighth month in the lunar calendar.  In Chinese beliefs, the full moon is the symbol for a family reunion. Many famous ancient poets wrote poems about the moon and expressed their homesickness. When people look at the moon, it reminds them of their families and homeland.  Today, people still like appreciating the moon during the Mid-Autumn Festival in China. Chinese family members have dinner together on the evening of the Mid-Autumn Festival. After dinner, they may talk about their work, children, and their future plans.

Moon-cakes are an essential part of the Moon Festival. This round pastry can contain various ingredients in a thin crust. Most of the flavors are sweet, with lotus seed paste or sweet bean paste in the center.  It is meant to be shared with the whole family.

Once, according to a Chinese legend, moon cakes helped at the start of a revolution. It happened during the Yuan dynasty (AD 1280-1368) founded by Mongolians from the north. It was said that a Han Chinese rebel leader, Liu Bo Wen, planned to arouse the Han Chinese to rise up against the ruling Mongolians and end the Yuan dynasty. He gained permission to give gifts to his friends in different bases. These gifts were round mooncakes. Liu asked his subordinates to hide pieces of paper in the cakes with the date of the Han Chinese rebellion (the 15th night of the 8th lunar month). Thus, Liu got word to his people who found the revolutionary message when they cut open the mooncakes. They then set out together to overthrow the Mongolians, thus ending the Yuan dynasty.

Nowadays, Chinese communities all over the world eat mooncakes during the Moon Festival, such as the Chinatowns in the USA, Canada, Europe, Australia and throughout the world. Some countries like Vietnam and Singapore also celebrate this traditional festival.
Karva Chauth is a one-day festival celebrated by Hindu women in Northern India, in which married women fast from sunrise to moonrise for the safety and longevity of their husbands. The festival falls on the fourth day after the full moon, in the Hindu lunisolar calendar month of Kartik. Sometimes, unmarried women join the fast for their fiancés or desired husbands Karva is another word for 'pot' (a small earthen pot of water) and Chauth means 'fourth' in Hindi (a reference to the fact that the festival falls on the fourth day of the dark-fortnight of the month of Kartik. One hypothesis is that military campaigns were often conducted by men in far-off places whereby men would often leave their wives and children to go off to war. Their wives would often pray for their safe return.

Another story about the origin of this festival relates to the bond of feminine friendship. With the custom of arranged marriage being prevalent, the newlywed bride would reside with her husband and the in-laws. Everyone being a stranger to her, the custom arose of befriending another woman as her friend (kangan-saheli) or sister (dharam-behn) for life. Their friendship would be sanctified through a Hindu ritual during the marriage ceremony itself. The bride's friend would usually be of the same age (or slightly older), typically married into the same village (so that she would not go away) and not directly related to her in-laws (so there was no conflict of interest later).

This emotional and psychological bond would be considered akin to a blood relationship. It is said that Karva Chauth festival evolved to include celebrating this special bond of friendship. A few days before Karva Chauth, married women would buy new karvas (spherical clay pots) -- and paint them on the outside with beautiful designs. Inside they would put home-made candy and sweets. The women would then visit each other on the day of Karva Chauth and exchange these karvas.