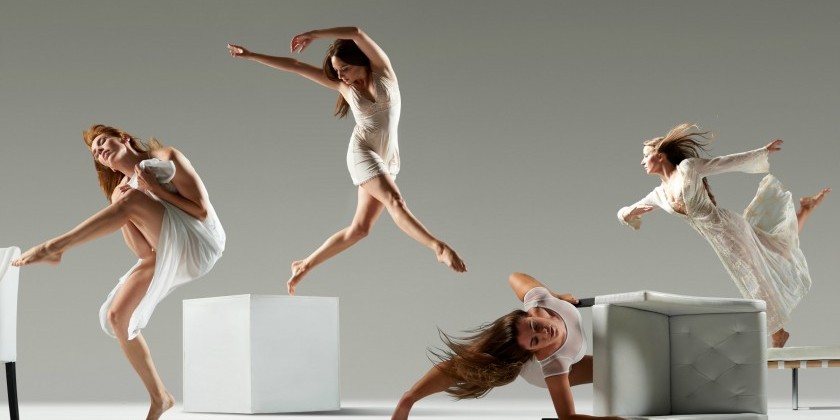 Works in "Anthology" include:

“The Groove” is a quartet that abruptly overturns and surges within a buzzing sound score.  Volatile and groping with physical tension and angular movement, the foursome becomes a trusting yet aggressive community trying to connect. With the performers donning 70’s styled flared dresses, the dance suggests a cyclicality that is both transformative and acknowledged, as the four women shift, interrupt, and override in an out of habitual and unifying formations.

“10” is a new solo choreographed and performed by Director Erin Carlisle Norton that utilizes a sound score of her own recorded voice to narrate and share experiences of running a dance company for ten years.  Humorous while reflective and sincere, the work utilizes only movement and phrasing material found in the company’s body of choreographed works and movement practices.

“The Jam” is a quartet with a mod flair, exacting attitude, and 60's surf and rock soundtrack.   Organized into 4 sections, the dance work suggests the extremes of a turbulent era side by side with a pop culture that promoted mirth and oblivion, articulated through a punctuated movement vocabulary that embraces and rejects these states with an underlying tone of seriously rocking out.

"Americana" adds to TMA’s rich history and Norton’s focus of embodying past and distant spaces in the heightened present of live performance.  "Americana" looks to the iconic images and interpersonal struggles of the migrating American family during the Great Depression era.  Through exactingly rhythmic movement, tornadoes of meaningful interaction, and heartfelt gentleness, this women-centric work exemplifies the expansiveness of the Midwest prairies, fragility of the weathered spirit, and grit needed to survive rough times. Includes video projection by gwen charles.

ABOUT THE MOVING ARCHITECTS

The Moving Architects, under Artistic Director Erin Carlisle Norton, is a female-centric dance company that channels the authentic complexity of both the current and historically lived female experience into dance works edged with charged movement and feminine strength.  The resulting dance works reveal intense female performances that make connections between bodies in motion, location and space, as well as historical and physical experience.  TMA has performed and taught extensively since its formation in 2007 in academic and community settings throughout the NYC-area, East Coast, Midwest, and internationally in Central Asia, Guatemala, and Morocco.