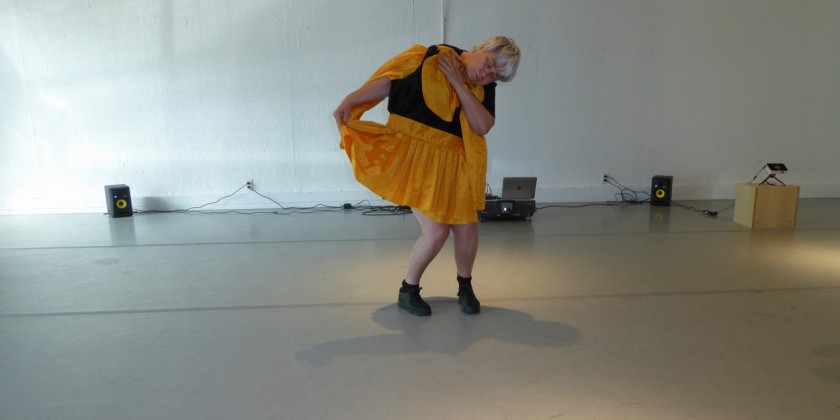 Performance artist and choreographer Karen Bernard will present her new interdisciplinary work, Lakeside, Thursday–Saturday, February 6–8, at 8pm, at the Salon/Douglas Dunn Studio, 541 Broadway (between Prince and Spring Streets), in Manhattan.

Karen Bernard presents a haunting new performance confronting the memory of trauma and its lasting impact on the body. Using a found costume from her past (a bright yellow and black body suit), Bernard conjures a scene where she and her collaborator Lisa Parra inhabit roles of victim, witness, and murderer, crisscrossing identities though minimalistic movements that have the power to deliver an emotionally charged wallop characteristic of Bernard's layered and introspective work. The costume itself is imbued with a personality that is passed back and forth between Bernard and Parra, pointing to a shared experience of physical terror. The act of watching and bearing witness to violence is subtly interrogated, leading us to question what spectatorship means in a culture that regularly transmits and consumes violent imagery done to female bodies.

Karen Bernard Projects is a program of New Dance Alliance. Lakeside was made possible through creative residencies at L'Annexe-A in Quebec and Foundation Obras in Portugal.

Tickets for Lakeside are $20 and can be purchased at Brown Paper Tickets.

For more information about Lakeside, go to http://newdancealliance.org/karen-bernard/whats-new/

Karen Bernard is a choreographer and interdisciplinary performance artist based in New York City. She began studying dance at age three with her father, Steven Bernard, a company member with 20th-century dance pioneer Charles Weidman. She grew up in a household that incorporated her father’s dance school, with students crossing through the family space, so performance art has been deeply ingrained throughout her life. As an artist and the founder and director of New Dance Alliance (NDA), she performs, teaches, lectures, and serves on advisory panels across the US, Canada, and Europe. This cross-pollination strengthens an ongoing social dialogue among international artists, one that exemplifies her lifelong commitment to performance. That commitment is fully brought to life in NDA’s justly renowned Performance Mix Festival, now celebrating its 34th year.

Between 1986 and 1998, Bernard presented a series of solos in collaboration with DIA Center for Arts that went on to be presented at The Kitchen, Performance Space 122, Dixon Place, Danspace Project, Triskelion, and Dance Theater Workshop. Bernard received critical acclaim for Removed Exposure, which premiered at Dixon Place and went on to the Festival of New Dance in St. John’s, Newfoundland, Women in Transition in Vienna, and was later remounted at Here Arts Center (NY). A handmade book of the same name, Removed Exposure, was co-created with Canadian bookmaker Gray Fraser. Many of her earlier works were developed through Fieldwork and presented at Studio 303 in Montreal, as well as Hysteria at Buddies in Bad Times Theatre in Toronto. Bernard has received support through residencies including Bogliasco, Earthdance White Oak, Silo at Kirkland Farm, Wassard Elea, Firkin Crane’s Blank Canvas, Tractor D’Clinic, Movement Research, and the Emily Harvey Foundation. In 2018, Bernard had a two-month residency at Brooklyn Studio for Dance to continue to develop a group work entitled Showgirls, a deconstruction of glamour in decline juxtaposed against evocative imagery of a crumbling Venice, culminating in performances. Through a residency at Foundation Obras in Portugal in 2018 and at Chashama in New York City in 2019 (where she transformed a 2,700-square-foot empty office space into a video and set installation), she presented her work Poolside.

Bernard has received funding from the New York City Department of Cultural Affairs, Electronic Arts and Media with support from New York State Council on the Arts Council, Puffin Foundation, and as a USArtist. She received a BAX 10 award for her invaluable service to artists in the founding and development of the Performance Mix Festival. Bernard is a co-founder of E|MERGE Interdisciplinary Collaborative Residency at Earthdance.

Lisa Parra is a New York-based choreographer and performer from Los Angeles. Her work has been shown in New York at Movement Research, New Dance Alliance, Center for Performance Research, Triskelion Arts Center, Green Space, and Experimental Media and Performing Arts Center. Internationally, her work has been presented in Portugal at Alkantara in Lisbon, Centro para os Asuntos de Arte e Arquitectura in Guimaraes, Fábrica de Movimentos in Porto, and DVIR CAPA in Faro; in Spain at Gracias x Favor festival at Teatro Pradillo in Madrid, Bilbao Eszena in Bilbao, and in Barcelona at the IDN Festival. Parra was recently a 2017-2019 Artist in Residence at Movement Research. In addition to her own work, she has performed in works by Karen Bernard and Emma Rose Brown, and has an ongoing collaboration with Portuguese media artist Daniel Pinheiro with their research project LAND that focuses on online performances.

Andi Villa Stover is a writer, director, and dramaturg. As writer/director for LiveFeedNYC she has various credits such as: Places, Noodles Astray (La MaMa E.T.C.), Julie S. Caesar & The Housewives of Trevi (AceHotel), and Black Eye Fixer (Glasslancs Gallery and Club Midswa7y). As a dramaturg, she has worked with playwrights Sibyl Kempson, Yasmine Lever, Charles McNulty, and choreographer Johanna Meyer. She is a frequent contributor to the Brooklyn Rail. Stover is a graduate of Brooklyn College (MFA) and Yale University (BA).