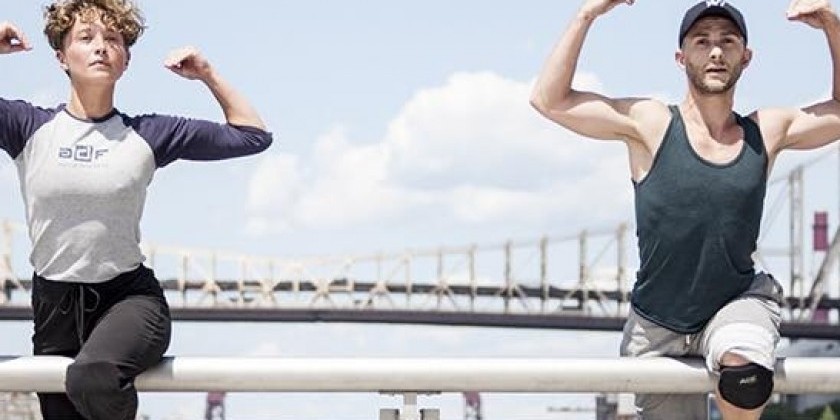 an invitation into the creative dance process

As part of Kinesis Project Dance's Revealing Dances series, audience members are invited to take part in the creation of a new work, Breathing with Strangers, in Riverside Park South. The Revealing Dances Open Rehearsal will begin at 6:30pm on Wednesday, July 24. Guests are welcome to join the company at Engine Park in Riverside South, entrance at 12 Avenue, Riverside Boulevard between W. 59th Street and W. 72nd Street, NYC. This event is free and open to the public.

Revealing Dances is an ongoing open rehearsal and facilitated conversation series invented by Melissa Riker (Kinesis Project dance theatre) and Jeremy Williams (Convergences Theatre Collective) as a way to welcome audiences deeper into the live arts creation process. The open rehearsal will take place in two parts: First, a public rehearsal by the company invites audiences into the process of how a collaborative, site-specific dance is made. Second, the company opens up the floor to the audience, to give feedback and reactions as well as ask questions, through a facilitated conversation.

Due to the nature of our work, audiences should expect to move throughout the rehearsal.

To learn more about the Open Rehearsal series and the company, visit https://kinesisproject.squarespace.com/

Melissa Riker is Artistic Director and Choreographer of Kinesis Project dance theatre. She is a New York City dancer and choreographer who emerged as a strong performance and creative voice as the NYC dance and circus worlds combined during the 90's. Riker's dances and aesthetic layer her training as a classical dancer, martial artist, theatre choreographer and aerial performer. She creates dances on site - and in context. Riker invents large-scale out-door performances and spontaneous moments of dance for individuals and corporate clients. Audiences and critics have called Riker's work "a Marx Brothers' routine with soul," "A movable feast." And from The New York Times, her choreography is: "comically acrobatic, gracefully classical, visually arresting."

The M.F.A. Painting Program at University of Washington first brought Celeste Cooning to Seattle. Twelve years later, she is best known for creating large-scale, hand-cut installations. Aside from various exhibitions, her work adorns city parks, storefronts, special events, and the stage. 2013 marked the transformation of Cooning's signature cut paper aesthetic into a permanent outdoor sculpture through 1% for Public Art and Seattle's Office of Arts and Culture. Bounty functions as a threshold for Jackson Park Perimeter Trail in Seattle's Pinehurst neighborhood. The stylized, ornate fronds harken to the lush, abundant beauty of the Pacific Northwest landscape. More of Celeste Cooning's permanent installations reside in Seattle at Harborview Medical Center, Theo Chocolate, and Starbucks Global Art program. Collaboration is an important facet of Cooning's studio practice. Her childhood experiences as a performer come full circle as she works with Kinesis Project to create an immersive and layered site-specific production. For additional information, please visit www.CelesteCooning.com.

Jeremy Williams is a choreographer, director, teacher, writer, and collaborator committed to excellence and innovation in the Performing Arts.  He focuses on challenging and redefining the creation of new works, developing curriculum and pedagogy, as well as leading the professional development of educators, artists, and audiences. He has led the creation of over 50 original productions spanning the genres of drama, musicals, concert dance, experimental theatre, and nightlife entertainment. He is the Founding Director of Convergences Theatre Collective, a national network of contemporary theatre artists and teachers dedicated to creating new work and revealing the artistic process for contemporary audiences - both live and online.

As an arts advocate and leader, Williams has consulted and coached numerous individual artists and arts organizations in artistic, educational, programmatic, social media, promotions, and revenue/funding projects.  He has been a leader in promoting and educating the field about Audience Engagement as a tool for artistic and business success.  He has been a presenter and speaker for Engaging Dance Audiences, the national Dance/USA conference, Nonprofit Finance Fund's Leading for the Future Initiative, and many webinars for the field in his capacity as Community Manager for GoSeeDo.org (formerly the Audience Engagement Platform).  Williams is committed to creating, testing, learning, and sharing new models of business for artists and arts organizations to keep their work relevant and sustainable.

Since 2005, Kinesis Project's work has been experienced in San Francisco, San Diego, Seattle, Boston, Philadelphia, Vermont, Florida and in New York City at such venerable venues as Danspace Project, Judson Church, Joyce Soho, The Minskoff Theatre, The Cunningham Studio, West End Theatre and Dixon Place.  The company dances outside in sculpture gardens, universities, and annually since 2006 in Battery Park's Bosque Gardens and The Cloisters Lawn as well as hosting over 30 surprise performances all over New York City and the tri-state area as an element of the company's earned income and outreach programming with volunteer populated flashmobs. Residencies include: Earthdance 2006, Omi International Arts Center 2008, Kaatsbaan International Dance Center 2011, TheaterLab 2014, Adelphi University 2014. Ms. Riker is a 2016 and 2017 CDI Residency Fellow, 2015 LMCC Community Arts Fund grantee and was commissioned by The Brooklyn Botanic Garden for a surprise large-scale work and performances of her work Secrets and Seawalls at Omi International Arts Center, Long House Reserve, Gateway National Park in partnership with Rockaways Artist Alliance. Ms. Riker has received commissions from Carson Fox and the Ephemeral Festival in 2013, 2014, 2015 and 2016 for large-scale outdoor events, NYU in 1998, for an outdoor work long before "flashmob" was coined, 2006 and 2008 grants from the Puffin Foundation for her work Community Movements, a dance work with community volunteers, Fellowships from the Dodge Foundation, Space Grant Residencies from 92nd St Y, The New 42nd St Studio, Gibney Dance Center, and The Joyce Theatre Foundation, and grants from The Bowick Family Trust and John C. Robinson to support the continued work of Kinesis Project dance theatre.