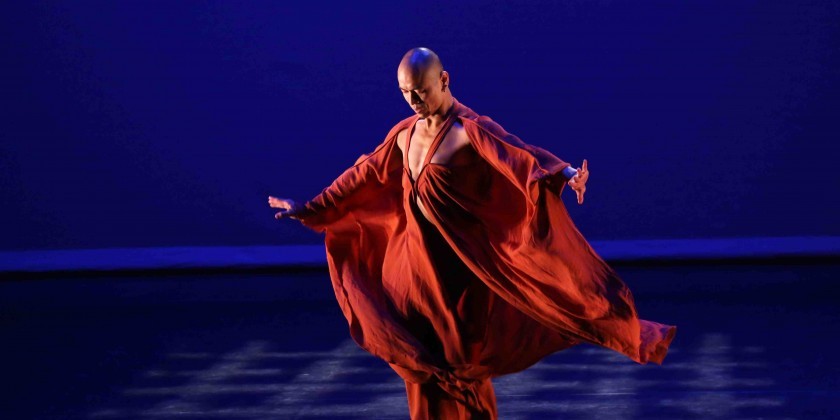 The proudly South-Philly-based KYL/D is thrilled to announce its upcoming international, national and local performances, including at New York’s Lincoln Center and at the prestigious Tanzmesse Internationale Festival in Germany.

Through the lens of an immigrant artist finely trained in diverse movement traditions, contemplative practices and philosophies of Asian origin, as well as Western contemporary dance techniques and improvisation methods, Kun-Yang Lin has developed an original movement language. His technically-demanding, contemporary works grapple with the complexities inherent in a dualistic culture, where motion/stillness, light/shadow and east/west are perceived as opposites. In cultivating an ensemble of skilled dance artists with shared values, Lin explores commonalities while honoring the gifts of each individual. Indeed, it has been said that “Lin has found the key to making dances that show what individuals are all about.” (New York Times Radio).

In Philadelphia, KYL/D will participate in the “Come Together Dance Festival”, along with 27 other Philadelphia dance artists and companies uniting as a community to raise the visibility of contemporary dance in Philadelphia. KYL/D will perform at the Festival’s opening night on Wed. July 23 (at 7:30pm) and on Sat. July 26 (at 8pm).  Further information about the Festival is available at: koreshdance.org/cometogether_2014.php

Coinciding with the 20th anniversary of its American debut at this venerable institution, KYL/D returns  to Lincoln Center’s Out of Doors Festival.  It was here in 1994 that Lin’s work was first seen in the USA, performed then by 5 dancers who constituted the original, NYC-based corps of KYL/D as it began touring in 2002.  Since KYL/D’s relocation to Philadelphia in 2008, the company has been building a loyal fan base and gaining critical acclaim.

KYL/D will perform at Lincoln Center’s Damrosch Park Bandshell stage on Thurs. August 7 (at 7:30pm), along with two other exciting groups, Ragamala Dance (with Rudresh Mahanthappa) and  Chinese Arts Dance Ensemble from Taiwan.  Information on Lincoln Center Out of Doors Festival is available at: lcoutofdoors.org

Marking another milestone, KYL/D makes its European premiere on the opening night of the prestigious, biennial Tanzmesse Internationale dance festival in Dusseldorf, Germany on Weds. August 27 at 9pm.  This engagement will be the first time Lin’s work has been performed in Europe since its London debut in 1993 while Lin was dancing with Transitions Dance Company of the Laban Center. Information about the Tanzmesse is available at:  Tanzmesse.com

KYL/D is one of just three American companies to be invited to the 2014 Tanzmesse. Only one other Philadelphia company has performed there -- Philadanco in 2010.

Works to be Performed:

Be/Longing 2 explores humankind's quests for connectivity -- with our deeper selves, our communities and the universe.  With original music by Cory Neale, Be/Longing 2 speaks to our individual and collective journeys from gravity to grace.

Mandala Project, which premiered in spring 2011 and was hailed by The Philadelphia Inquirer as “a masterwork of art, spirituality and stagecraft”, was constructed over a two-year period, during which time Lin conducted research in Cambodia, Indonesia, Europe and India, and incorporated these experiences into the body research of the studio.  Mandala is the Sanskrit word for circle, community, unity and connection.  In Eastern traditions, the mandala is a form of sacred art that depicts the totality of the self as well as the path to a more awakened state of being.

Hailed for its superbly trained dancers and inventive choreography, the internationally-active KYL/D probes at the limits of national identities. Founded in NYC in 2002, KYL/D relocated to Philadelphia in 2008.  Drawing upon Eastern philosophies while expanding the perimeter of contemporary dance, Artistic Director Lin's Zen-inspired practice of dance manifests in lush works of poetic sensibility that The New York Times has said "create and inhabit worlds of their own."  Lin draws upon multicultural insights from his ongoing research throughout Asia, creating a personal movement language that is an unexpected hybrid between Western and Eastern cultures, suffused with strong spiritual underpinnings.  KYL/D has performed across the United States and internationally including at the Busan International Dance Festival in Korea, Jogia International and AsiaTri festivals in Indonesia, Festival Internacional de Danza in Queretaro, Mexico, Victoria Theatre in Singapore, HsinChu Performing Arts Center in Taiwan, in the U.S. at Interlochen Festival, Columbia Festival, Kaatsbaan International Dance, Jacob's Pillow Inside/Out, Lincoln Center Out-of-Doors Festival, Dancing in the Streets Festival, Painted Bride Art Center, Annenberg Center, Kimmel Center with the Center City Opera and the Barnes Foundation Museum.  WHYY/PBS honored Kun-Yang Lin/Dancers with a nationally broadcast, 30-minute documentary in its award-winning On Canvas series in 2011.  KYL/D also was featured by MindTV in its celebrated 2011 broadcast series A World of Dance in Philadelphia.  For more information about KYL/D, please visit www.kunyanglin.org.

Kun-Yang Lin, Artistic Director of Kun-Yang Lin/Dancers & Founder of CHI Movement Arts Center has received numerous awards in his native Taiwan and been widely recognized in the United States for both his dancing and choreography including, in 2002, by Back Stage, which selected Lin as “the year’s most promising choreographer.” Lin has performed throughout Europe with Transitions Dance Company and in the U.S.in the companies of Martha Graham, Anna Sokolow, Jennifer Muller/The Works, Kevin Wynn Collection, Paula Josa-Jones, Janis Brenner & Dancers, Doris Humphrey Repertory Dance Company and the Mary Anthony Dance Theatre. He has been called “an extraordinary dancer” (New York Times), “theatrical visionary…outstanding choreographer and compelling performer” (Philadelphia Inquirer). Lin or KYL/D has been the recipient of numerous grants, including from The William Penn Foundation, the Pew Center for Arts and Heritage, the Philadelphia Foundation, the Samuel S. Fels Fund, the Independence Foundation, the Stockton Rush Bartol Foundation, Temple University, the Barra Foundation, Pennsylvania Council on the Arts and the Philadelphia Cultural Fund. In 2009, Lin was named by the Painted Bride Art Center an “Artist of the City” for his outstanding contributions to the arts and culture of Philadelphia.  In 2010, the Mayor of Hsin-Chu, Lin’s hometown, honored him as a “son of the City” for his cultivation of artistic excellence at the international level and in 2011 he was named a “Creative Connector” through a nomination process coordinated by Leadership Philadelphia.

Highly sought as a teacher, Lin is regularly invited to offer master classes and workshops throughout the U.S. and abroad.  He has been on the faculty of The Beijing Dance Festival, The Yard at Martha’s Vineyard, H.B. Actor’s Studio, Peridance Capezio International Dance Center and The Limon Institute.  Since 2003, Lin has been a Professor at Temple University’s Center for the Arts in Philadelphia.  For more information please visit: www.kunyanglin.org

"If there's such a thing as quiet-ly taking the city by storm, then that's what Kun-Yang Lin's done in Philadelphia. The man is highly spiritual, and that trait seeps into his expressive dance works, many of which are of a poetic, soulful quality. In both his life and art, Lin strives for a sense of connection and he's handily achieved that on the local dance scene, where his company's shows frequently sell out.’  City Paper


".. evocative performance that drew audience members into a physical and primal world, but one, which also hearkened to a very human spirituality and sense of unity." —Knight Arts Foundation

Lin’s dances “create and inhabit worlds of their own."  —The New York Times