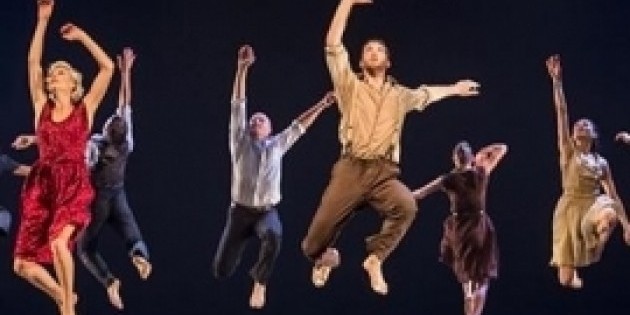 Listings Information
Who: BJM – Les Ballets Jazz de Montréal
Where: Celebrate Brooklyn! at the Prospect Park Bandshell (Prospect Park West & 9th St., Brooklyn)
When: Thursday, August 1, 8:00 P.M., gates open at 7:00 P.M.
Admission: Free ( suggested donation)
More information: www.BRICartsmedia.org/cb or 718.683.5600
BRIC is pleased to present a free dance performance by BJM – Les Ballets Jazz de Montréal, August 1 at the Celebrate Brooklyn! Performing Arts Festival. This hybrid dance company that whimsically infuses classical ballet with a host of interloping modern styles will perform a three-part program of works including Benjamin Millepied’s Closer, Wen Wei Wang’s Night Box and Barak Marshall’s Harry. The event begins at 8:00 PM and is free to the public (with a suggested contribution at the gate). The Celebrate Brooklyn! Performing Arts Festival takes place at the Prospect Park Bandshell, 9th St. & Prospect Park West.
Founded in 1972 by Geneviève Salbaing, Eva von Gencsy and Eddy Toussaint, BJM – Les Ballets Jazz de Montréal (BJM) has pursued a unique path. Contemporary in its current approach, BJM gives performances that are sexy, explosive, original and accessible and its superb dancers are widely acclaimed. The term “jazz” in the name refers more to a “jazzing up” of classical ballet, rather than a musical or dance style.
Since 1998, BJM has been under the masterly command of Artistic Director Louis Robitaille. His unerring flair for attracting talented choreographers and presenting high calibre dance pieces keeps raising the bar for his team of performers and stage professionals. Robitaille has presented works by internationally acclaimed choreographers such as Mia Michaels, Trey McIntyre, Patrick Delcroix, Rodrigo Pederneiras, Mauro Bigonzetti, Annabelle Lopez Ochoa, Cayetano Soto and Barak Marshall. He is particularly interested in supporting and encouraging Canadian choreographers, composers and designers. The work of celebrated Canadian choreographers such as Dominic Dumais, Crystal Pite, Aszure Barton and more recently of Wen Wei Wang have enriched the BJM repertoire.
BJM is one of Canada’s most popular dance companies. It has presented more than 2,000 performances in 65 countries to more than 2 million spectators, and is a veritable ambassador of Quebec and Canadian culture worldwide. Please visit www.bjmdanse.ca for more information on the Company.
About the Program
Closer
Benjamin Millepied
Set to composer Philip Glass’s Mad Rush, the duet Closer was created in 2006 for Céline Cassone and Sébastien Marcovici (principal dancer with the New York City Ballet) and presented at the Maison de la Danse in Lyon, France. For BJM, Céline Cassone and Alexander Hille will perform the duet. Closer is a voluptuous and vibrant exchange, imbued with an intense yet simple sensuality, that of the tension between two bodies.
Over the course of 20 minutes, Cassone is carried, pulled and lifted with movements of crystalline beauty and delicacy, rousing the sentiments of the audience, who are transported into the couple’s passionate relationship. Enhancing the work is a live performance of Glass’s piano piece, Mad Rush, reverberating throughout the hall, evoking the purity of the dancers’ emotions.
Night Box
Wen Wei Wang
In creating this new piece for BJM, Wen Wei Wang was inspired by urban life, especially as it unfolds at night. Evoking the city through sounds, rhythms, music and an incessant blinking of lights, Night Box is a high-voltage work in which love, loss, sexuality and joy are intertwined. In a state of perpetual movement, it combines contemporary ballet with street dance in alternating sequences for group, trio, duet and solo. Adopting an approach in which lighting plays a central role, Wen Wei Wang recreates the full spectrum of the city at night: its private spaces, clubs and streets. Against a backdrop of darkness, these diverse spaces become bathed in light.
Harry
Barak Marshall
For this new creation, made-to-measure for the BJM dancers, the Israeli-American choreographer Barak Marshall was inspired by the inner battles we all wage. “Life is a constant struggle,” he says, “in which we are continually faced with conflicts with regard to culture, gender, species.” Between men and women, in particular, compromises must be made to achieve a balance. This piece revolves around the character of Harry, who struggles to overcome forces both physical and existential. Teeming with energy, the work underscores a recurrent theme in human interactions: conflicts and our ability to overcome them. Set to a score combining jazz, Israeli folksongs and traditional music, this new opus is imbued with hope and humor, alternating group sequences, trios and duets in a fabulous extravaganza of dance.
ABOUT BRIC AND THE CELEBRATE BROOKLYN! PERFORMING ARTS FESTIVAL
BRIC, which celebrates its 35th anniversary this year, has been the driving cultural force behind a number of Brooklyn’s most renowned and beloved arts and media programs. All of BRIC’s programs are anchored by the organization’s commitment to artistic excellence, programmatic breadth, diverse cultural representation and genuine accessibility.
BRIC presents live music and performing arts, contemporary art, and community media programs. The organization places special emphasis upon providing opportunities and platforms for Brooklyn artists and media makers to create and present new works.
The Celebrate Brooklyn! Performing Arts Festival is BRIC’s flagship performing arts program. Launched by BRIC in 1979 as a catalyst for a burgeoning Brooklyn performing arts scene, and to bring people back into Prospect Park after years of neglect, Celebrate Brooklyn! was an early anchor in the park’s revitalization and has become one of the city’s foremost summer cultural attractions. Over its history, the festival has presented over 2,000 artists, from emerging innovators to internationally established performers.
This fall, BRIC will inaugurate a new era of service to the borough when it opens BRIC House, a 40,000 square-foot arts and media facility located in the cultural hub of Downtown Brooklyn. The complex includes a flexible state-of-the-art performance space, a major contemporary art gallery, artist workspace, and multiple television and media production studios.
For more information, please visit www.BRICartsmedia.org.