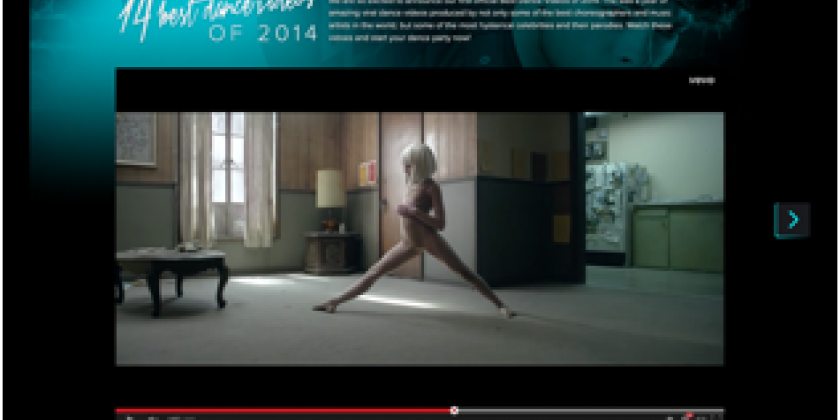 From Ellen Degeneres, Jimmy Fallon, and Sia
to the best Professional Dance Crews around the World
The Top 14 List Consists of the Most Creative and Popular Dance Videos This Year

New York, December 2, 2014 -- Through television competitions, amazing creativity and instant worldwide connection, 2014 became the year of viral dance videos. Some of this year’s (and yesteryear’s) most popular songs provided the backdrop for wacky, thoughtful and inspirational dances that grabbed the attention of millions. You could say these internet sensations danced as if no one was watching, except that hundreds of millions of people have watched these special moments over and over again.

DanceOn, the leading YouTube dance network, took on the mission of compiling the best dance videos of the year from amateurs and celebrities around the world. After an extensive search of the top videos of 2014, they compiled a list of dances that featured kids, talk show hosts, music videos and reality competitions. From those categories, the top videos were chosen by the DanceOn editorial team based on creativity and popularity to make the list of Top 14 Dance Videos of 2014.

Some of the most viewed videos consisted of Jimmy Fallon’s nostalgic “Evolution of Hip Hop” performance on The Tonight Show with Will Smith,  Alfonso Ribeiro’s iconic “Carlton Dance” on Dancing With The Stars, 11 year-old viral dancing sensation  Taylor Hatala  and a mother and son  wedding dance  that is sure to inspire numerous imitators, but few duplicators.

DanceOn’s list of the Top 14 Viral Dance Videos of 2014 can be found here http://www.danceon.com/bestvideos2014.

For more information about DanceOn and its network of over 650 dancers, visit http://www.danceon.com.

About DanceOn:
Co-founded by Madonna, CEO Amanda Taylor, Guy Oseary and Machinima CEO Allen DeBevoise, DanceOn was selected as part of YouTube’s $100 million original content initiative and established itself as one of the top 10 premium YouTube channels. From reality competitions to docu-series, from scripted shows to user-generated content, DanceOn creates engaging programming, reaching a network of over 15 million users across social channels.