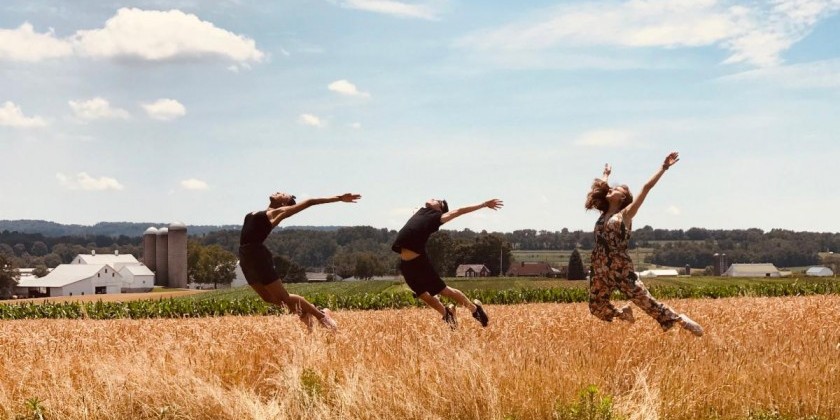 The Nai-Ni Chen Dance Company, a renowned international touring dance company led by Chinese American choreographer Nai-Ni Chen, announces an exciting 2021-2022 season. The company of eight dancers are looking forward to meeting audiences to share the beauty of dance in person again. Please contact the respective presenters for more information as the dates draw close, as COVID requirements may necessitate changes as the year progresses. https://www.nainichen.org/

This summer, PBS/NJN's State of the Art premiered Nai-Ni Chen's Luminescence on air and

Nai-Ni Chen Dance Company began public performance outdoors at the Jamaica Dance Festival in NYC in June. The Company also performed indoors in the Summer Heat International Dance Festival in Tulsa, Oklahoma in July. The upcoming 2021-2022 Season will include the following engagements:

Zoellner Center for the Arts at Lehigh University, Bethlehem, PA

An outdoor, work-in-progress showing of Dragon Cipher, a new work in development with legendary hip-hop artists Rockafella and Kwikstep and their company, Full Circle Productions. The work aims to reflect the solidarity and mutual support of the Black and Asian community since the beginning of hip-hop culture.

A full evening, outdoor performance featuring some of the Company's most iconic works as well as dances newly developed during the pandemic.

New Jersey's premiere outdoor dance festival, will "return to the lawn" with live outdoor performances on Saturday, Sept. 11 from 3-5pm at St. Luke's Episcopal Church, 73 South Fullerton Avenue. The Nai-Ni Chen Dance Company is the featured professional dance company in the line-up of a large community of dancers.

The Company will perform Song of Phoenix, a production that includes many of the Nai-Ni Chen signature works, which introduce the audience to the unique immigrant journey experienced by the choreographer, whose work reflects the struggle and triumph in adapting and integrating with her new home.

The Company will appear with up-and-coming Asian American artists in the sixth annual CrossCurrent Festival, an ongoing initiative focused on developing a diverse audience for Asian American dancers and choreographers.

Schools in the Red Bank area can subscribe to a virtual presentation of Nai-Ni Chen's production Red Firecracker.

The Company will tour with its 2022 Lunar New Year production, Celebrating the Year of the Water Tiger.

The Company will perform A Quest For Freedom with the world-renowned Ahn Trio. A visually and aurally rich performance, A Quest for Freedom tells the experiences of the Ahns and Nai-Ni Chen as women performing artists in America.

The Company will launch its 34th anniversary celebration with Awakening, a new production showcasing Chen's ability to integrate diverse influences into a cohesive message that reflects the condition of the world today.

The Company will perform its in-person, indoor performance of Red Firecrackers, a fantastic production telling the story of the first Chinese Lunar New Year, a dance extravaganza for the entire family.

The Company will appear with up-and-coming Asian American artists in the eighth annual CrossCurrent Festival, an ongoing initiative focused on developing a diverse audience for Asian American dancers and choreographers.

In the Great Hall of Immigration,

Between touring dates,, the Company will continue its residency at the New Jersey City University in Jersey City, NJ with extensive community activities including dance curriculum planning, teaching and rehearsing, research and choreography. The Company is especially proud of its award winning program at the A Harry Moore School for children with multiple disabilities where the dancers are collaborating with therapists and teachers to create a uniquely creative dance curriculum for a population of 100 students from pre-K to 12th grade. This year, with strong support from the NJ State Council on the Arts, the Company will begin a new residency at NJ Regional Day Schools, expanding the program to include students with Autism.

Followers and audience members can gain an early glimpse of the Company's new works during our open rehearsal sessions and at Flushing Town Hall in New York; at NJPAC in Newark, and as well as at pop-up locations around the NY/NJ area to be announced on the Company's e-newsletter.

In addition to developing new dances, Nai-Ni Chen is equally committed to introducing the Chinese American heritage to children and families in diverse communities. The Company's K-12 assembly program The Art of Chinese Dance is performed throughout the year in schools and community centers in Connecticut, New Jersey, New York and Pennsylvania.

Continuing its commitment to preserve and advance dance in the community in New Jersey, the Company Offers regularly scheduled, free dance workshops online, The Bridge. Interested audiences can sign up on the Company's website at nainichen.org/thebridge.

Bringing the dynamic freedom of American modern dance together with the elegant splendor of Asian art, the Nai-Ni Chen Dance Company is one of the most visible Asian American dance companies in the United States. Ms. Chen's unique choreography transports audiences beyond cultural boundaries to the common ground between tradition and innovation, discipline and freedom, and form and spirit. Since its inception in 1988, the company has earned a broad base of public support and has toured extensively to major performing arts centers throughout more than thirty states. Presented by some of the most prestigious concert halls in the United States, from the Joyce Theater in New York to the Ordway Center in Minnesota and the Cerritos Center in California, the Company has mounted more than twenty national tours and nine tours abroad. Ms. Chen's work has been presented by such acclaimed international festivals as the Silesian International Contemporary Dance Festival and the Konfrontations International Dance Festival, both in Poland, the Chang Mu International Arts Festival in Korea and the Meet in Beijing International Arts Festival. The Company was also honored by a distinctive grant award from both the President's Committee on Arts and Humanities and the Department of State to represent the United States in a seven-city tour arranged by the Tamaulipas International Arts Festival in Mexico. Also, the Nai-Ni Chen Dance Company has the unique honor of having received more than fifteen awards from the National Endowment for the Arts and numerous Citations of Excellence and grants from the New Jersey State Council on the Arts.

In addition to its extensive season of touring and performing, the company has developed Arts in Education residency programs in school districts to bring culture and arts into educational settings. It's colorful and engaging in-school assembly program "The Art of Chinese Dance" has been presented in hundreds of schools in NJ, NY, CT and PA, reaching hundreds of thousands of youth. The Company is currently in-residence at New Jersey City University and assisting NJCU in the development of a new BFA in Dance. For additional Company information, visit www.nainichen.org; write to Nai-Ni Chen Dance Company, P.O. Box 1121, Fort Lee, NJ 07024; or call (800) 650-0246.