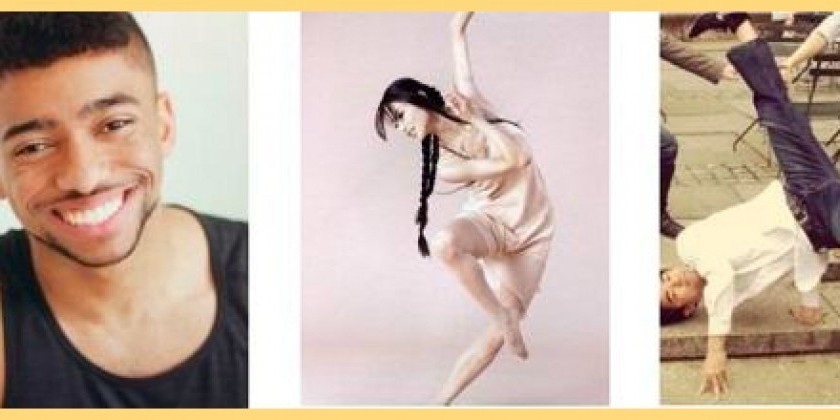 New York - In the midst of the COVID-19 crisis, the Nai-Ni Chen Dance Company is keeping its dancers in shape by conducting regular Company Classes online from Nai-Ni and Company dancer’s living rooms using Zoom. After a few weeks, Company members and Nai-Ni invited former dancers of the Company and friends to join through Zoom. At the same time, company dancers translated their online dance teaching skills to serve K-12 students and students with disabilities in underserved communities. Dance has brought them rays of hope and joy in their confined environment.

As a Company rooted deeply in diversity and committed to the dancer’s artistic journey, Nai-Ni Chen began inviting her friends who are world renowned as well as up and coming dancers and choreographer to come teach the Company class. The response has been extremely positive, especially in this time when Asian Americans community is experiencing racism and hate.

Yuki Ishiguro, Japanese native, artistic director of the dance company "Yu.S.Artistry" had diverse training from ballet to Break dance in Japan. He moved to NY in 2009 to study contemporary dance.  Yuki has worked and toured with Roxey ballet, Catapult entertainment and Emery LeCrone dance.  From 2018 Yuki started his own company Yu.S.Artistry fiscally sponsored by New York Live Arts. His work has been presented at Booking dance festival at Jazz at Lincoln Center, DUMBO dance festival, MAD festival at Nazareth college, Come together dance festival at Suzanne Roberts Theater, International dance festival by Nickerson Rossi dance at performance garage in Philadelphia and showcased his own evening-length show "Shifting Tides" at Actors Fund Arts Center in 2019.

Evan Matthew Stewart, originally from Buffalo, NY, began his dance training at Miss Barbara's School of Dance and at the age of ten continued to advance his training at David deMarie Dance Studio in styles varying from contemporary to tap and ballet to jazz. Evan also attended the Royal Academy of Ballet (Buffalo, NY) under the direction of Beth Waddell and while in college, attended the Joffrey School of Ballet New York City summer intensive to further his skills in ballet. In 2016, Evan graduated from the University of Buffalo with his BFA in dance and minor in counseling. During his time at the University at Buffalo, Evan was a member of the dance program's pre-professional company Zodiaque under the direction of Thomas Ralabate and Tressa Gorman-Crehan. Since moving to NYC, Evan has had the opportunity to work with Ebony Williams and perform for her at Jacob's Pillow. Evan is also a dancer in the upcoming film "In the Heights" directed by Jon Chu and choreographed by Chris Scott.

Zhongmei Li began her dance training at the Beijing Dance Academy, China's foremost dance institution, and continued in the U. S. winning full scholarships to study at both the Alvin Ailey and Martha Graham schools. She performed on Broadway in the long-running musical "The King and I," and she earned a master's degree in fine arts at the Tisch School at New York University. In 1994, she created the Zhongmei Dance Company, with which she performed all over the United States. In addition, she has performed in many other countries, including Singapore, France, Israel, and Brazil. She is a regular guest performer with the Aspen Santa Fe Ballet. Zhongmei's story is available in a non-fiction book, "A Girl Named Faithful Plum," by Richard Bernstein.

"A blossom of color, energy and motion, “like endlessly proliferating forces of cosmic energy,” says the New York Times.

Since its inception in 1988, the company has earned a broad base of public support and has toured extensively to major performing arts centers throughout more than thirty states. Presented by some of the most prestigious concert halls in the United States, from the Joyce Theater in New York to the Ordway Center in Minnesota and the Cerritos Center in California, the Company has mounted more than twenty national tours and nine tours abroad. Ms. Chen’s work has been presented by such acclaimed international festivals as the Silesian International Contemporary Dance Festival and the Konfrontations International Dance Festival, both in Poland, the Chang Mu International Arts Festival in Korea and the Meet in Beijing International Arts Festival. The Company was also honored by a distinctive grant award from both the President's Committee on Arts and Humanities and the Department of State to represent the United States in a seven-city tour arranged by the Tamaulipas International Arts Festival in Mexico. Also, the Nai-Ni Chen Dance Company has the unique honor of having received more than fifteen awards from the National Endowment for the Arts and numerous Citations of Excellence and grants from the New Jersey State Council on the Arts.

In addition to its extensive season of touring and performing, the company has developed Arts in Education residency programs in school districts to bring culture and arts into educational settings. It’s colorful and engaging in-school assembly program “The Art of Chinese Dance” has been presented in hundreds of schools in NJ, NY, CT and PA, reaching hundreds of thousands of youth. The Company is currently in-residence at New Jersey City University and assisting NJCU in the development of a new BFA in Dance.