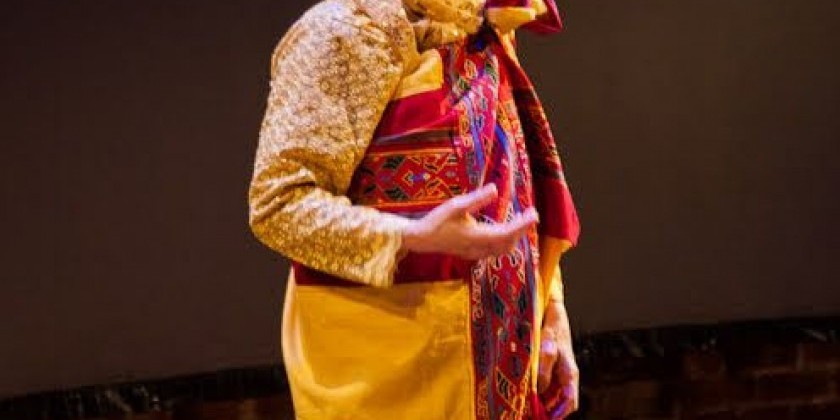 The Bridge Class schedule are as follows:

Tap into the creative energy of the universe through Kinetic Spiral. Nai-Ni Chen's signature technique is based on the principle of ever-changing universal forces of Yin and Yang. Dance phrases from Nai-Ni Chen's repertory will be taught.

About Andrew Pacho and Flow

Learn to stretch, warmup, heal and strengthen your body with renowned dancer/gymnast Andrew Pacho. He developed Flow to heal himself and he has successfully helped many others. Join us for an hour of dancing on chair!

Join an interactive, 1 hour exploration and adventure into the mythical world of Mindanao, southern Philippine where earth meets the water and its kingdom hidden in the clouds.  A world of dance formed by the interaction among the enchanted birds, fish, reptiles and human world. This is a dance storytelling experience. Potri Ranka Manis Queano Nur is the Founder/Artistic Director and Tradition-Bearer of Kinding Sindaw.  She is an artist-activist who campaigns for the self-determination of the Moro and indigenous people.

In this trying time of change and uncertainty, the arts is a source of healing and unity, we would like to encourage everyone to support dance as dance is an essential medicine for the society to recover from the pandemic that has caused injury to our bodies and our hearts.  Support for The Bridge can be sent through https://nainichen.org/donate.

In the midst of the COVID-19 crisis, the Nai-Ni Chen Dance Company has established a new dance institute through Zoom, The Bridge. The Institute's aim is to bring together dancers, choreographers and directors around the world to experience the master teachers of color whose practices are embedded in the community and are focused on advancing the art of dance that transform the personal, environmental and metaphysical spaces.

As a virtual dance institute,The Bridge will invite world renowned as well as up and coming dancers and choreographer to come to guest teach the class. Advanced/Intermediate level professional or pre-professional dancers who are looking to explore beyond their own boundaries and looking for new dance experiences are encouraged to participate. The core program is based on Nai-Ni Chen's Kinetic Spiral, which is a cross-cultural dance vocabulary that integrates the Chinese martial arts philosophy in TaiChi with contemporary dance practices she studied in America. Guest artists will cover a wide range of folk and classical dance styles.

Potri Ranka Manis Queano Nur is the Founder/Artistic Director and Tradition-Bearer of Kinding Sindaw, and a Storyteller. On July 23, 2005 Potri was enthroned as Bai a Labi a Gaus sa Borocot by the representatives from the 17 Pagawidan a Ranao in Marawi City, Lanao del Sur. She is an artist-teacher faculty of Lotus Fine Arts. She a practitioner of Theater of the Oppressed and a producer and actor in Newyorkustan directed by Steven de Castro. Potri is an artist-activist who campaigns for self-determination of the Moro and indigenous people.

Bringing the dynamic freedom of American modern dance together with the elegant splendor of Asian art, the Nai-Ni Chen Dance Company is one of the most visible Asian American dance companies in the United States. Ms. Chen's unique choreography transports audiences beyond cultural boundaries to the common ground between tradition and innovation, discipline and freedom, and form and spirit. Since its inception in 1988, the company has earned a broad base of public support and has toured extensively to major performing arts centers throughout more than thirty states. Presented by some of the most prestigious concert halls in the United States, from the Joyce Theater in New York to the Ordway Center in Minnesota and the Cerritos Center in California, the Company has mounted more than twenty national tours and nine tours abroad. Ms. Chen's work has been presented by such acclaimed international festivals as the Silesian International Contemporary Dance Festival and the Konfrontations International Dance Festival, both in Poland, the Chang Mu International Arts Festival in Korea and the Meet in Beijing International Arts Festival. The Company was also honored by a distinctive grant award from both the President's Committee on Arts and Humanities and the Department of State to represent the United States in a seven-city tour arranged by the Tamaulipas International Arts Festival in Mexico. Also, the Nai-Ni Chen Dance Company has the unique honor of having received more than fifteen awards from the National Endowment for the Arts and numerous Citations of Excellence and grants from the New Jersey State Council on the Arts. In addition to its extensive season of touring and performing, the company has developed Arts in Education residency programs in school districts to bring culture and arts into educational settings. It's colorful and engaging in-school assembly program "The Art of Chinese Dance" has been presented in hundreds of schools in NJ, NY, CT and PA, reaching hundreds of thousands of youth. The Company is currently in-residence at New Jersey City University and assisting NJCU in the development of a new BFA in Dance. For additional Company information, visit www.nainichen.org; write to Nai-Ni Chen Dance Company, P.O. Box 1121, Fort Lee, NJ 07024; or call (800) 650-0246.