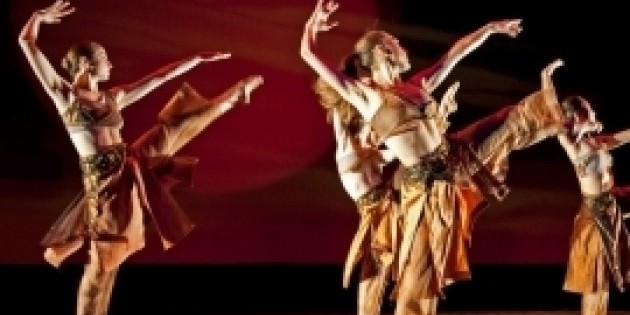 NAI-NI CHEN DANCE COMPANY
in
'WHIRLWIND'
Choreography: Nai-Ni Chen
Music: Glen Velez
Saturday April 6 at 8:30 PM; Sunday April 7 at 2:30
Salvatore Capezio Theater at Peridance, 126 East 13th Street (between 3rd & 4th Avenues)
Tickets: 5; 5 for students/seniors/children 12 & under
Reservations: 800.650-0246 or www.nainichen.org/NYSeason
Dancers: Greta Campo, Ekaterina Chernikhova, Eun Kyung Hong, Sabrina Jaafar, Jung Hm Jo, Daniel Johnson, James Johnson, Yoo Sik Kim
Costumes: Anna-Alisa Belous
Lighting Designer: Carrie Wood
Visual Artist: Jayanthi Moorthy
The Nai-Ni Chen Dance Company will present the New York Premiere of Ms. Chen's "Whirlwind," inspired by the choreographer's recent journey on the legendary Silk Road, which begins in China and passes through Central Asia, and set to music by renowned world-percussionist Glen Velez.   Two performances, April 6 & 7, at Capezio Theater at Peridance, 126 East 13th Street.
"Whirlwind" was born after Ms. Chen took a rail journey that started in Shanghai, one of the most modern cities in the world, to Xian, the ancient capital of the Tang Dynasty, and then to Duanhuang, well known for its giant Buddhist statues and thousands of cave paintings created by monks on their journey to India, through Turpan in the Gobi desert, one of the world's hottest locations, concluding in Wulumuqi, center of the modern-day Xinjiang Province.    Taking the traveler through many mountains and deserts, this ancient pathway not only connected trade and merchandise, but also cultures, art and religions of many countries.    Traces of creativity, courage and nobility from ancient times can still be felt along the way.   The work is named for a desert phenomenon called a whirlwind, caused by air coming from the mountains in all different directions to the plains.  It is believed by some to be the manifestation of the great breath, the divine energy of the universe.
In her work for eight men and eight women, Ms. Chen explores movements based on trance, rhythmic breathing, and continuous spiral motion.    She studied the shape and energy of the whirlwind, which is reflected in the music and dance of the people of the area.  Historically, the music and dance of the Silk Road had a deep impact on Chinese culture, dance, and martial arts, as characterized by the continuous circular motion of tai chi, as an example.
Coming back to the U.S., the native of Taiwan began exploring choreographic ideas based on the spiraling energy of the whirlwind.  To reflect the cross cultural contemporary musical context of the new work, Nai-Ni engaged composer, master drummer, and famed world percussionist Glen Velez and his TaKaDiMi Ensemble.   The resulting score, which features the Central Asian instrument of frame drum, and voice, helped the choreographer to convey the lively energy in the whirlwind.
The dance also incorporates visual elements from cross-cultural artist Jayanthi Moorthy of India, whose work incorporates traditional painting, digital animation and video.
The result is a dance inspired by new energies from vibrant cultures, an exciting percussion score, and an age-old phenomenon of nature.   Reviewing a recent performance of an excerpt from "Whirlwind" at NJPAC, Karen McDonough noted "Great original movement in this dance and beautiful artistic execution by the dancers."  (Body Wrappers, February 2013).
Whirlwind is created with support from a Live Music for Dance grant from New Music America which, in part, is supported by the Geraldine R. Dodge  Foundation.
Programs of the Nai-Ni Chen Dance Company are made possible in part by funds from the National Endowment for the Arts, the New Jersey State Council on the Arts/Department of State, a Partner Agency of the NEA, and the Geraldine R. Dodge Foundation.
www.nainichendance.