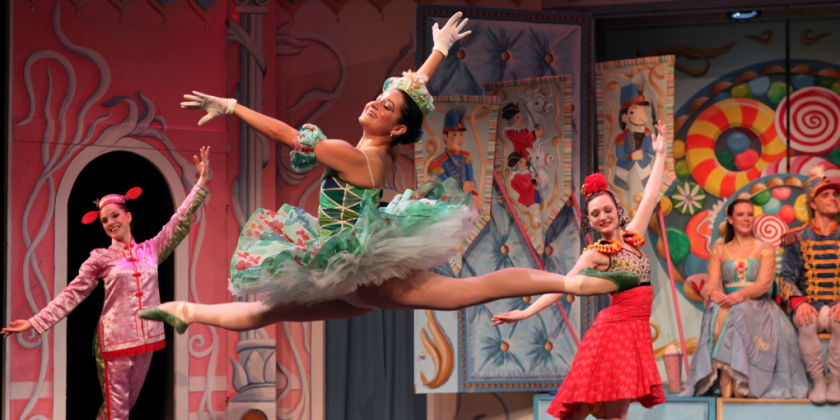 New York Theatre Ballet announces the 2014-15 season, which will include a national tour and repertory performances at the 92nd Street Y (January 10-12, 2015), New York Live Arts (February 18-21, 2015) and Danspace (June 17-20, 2015). NYTB continues to maintain its association with the New York Pops at Carnegie Hall, and the Company’s Once Upon A Ballet series for children will continue at Florence Gould Hall throughout the year. NYTB will also continue to offer its Free Ticket Program for families who are unable to afford to attend performances.

December 21, 2014 – Rudolph the Red-Nosed Reindeer with the New York Pops at Carnegie Hall

New York Theatre Ballet in The Public Theater's Shakespeare in the Park!

New York Theatre Ballet joins the cast of The Public Theater's musical adaptation of William Shakespeare’s The Winter's Tale with choreography by Chase Brock.  Performances are at the legendary Delacorte Theater in Central Park.

The program will feature the Broadway dances of Agnes de Mille, Rondo by Jerome Robbins, and a new work by Gemma Bond.

New York Theatre Ballet (NYTB) returns for a fourth year of Keith Michael’s The Nutcracker, an enchanting holiday ballet.  From clockwork imps to a luminous owl that flies above the audience, mice dressed in polka dots and dancers dancing with huge chopsticks, this timeless, re-imagined classic bursts with energy and excitement.  This holiday ballet, danced to Tchaikovsky’s beloved score, is set in Art Nouveau style circa 1907 with innovative choreography by long-time NYTB choreographer, Keith Michael; set design by Gillian Bradshaw-Smith; and costumes by Resident Costume Designer of the Metropolitan Opera, Sylvia Nolan.

The wit, wisdom, and whimsy of a lively baker’s dozen of Mother Goose characters.  They literally leap from the page to the stage to stir the imagination of the young and the young-of-heart – just as they have for centuries!

In a magical forest, Queen Diana and her shaggy lion rule a charming assortment of animals who live more or less peaceably until a pair of lost children wander in, and then the fun begins!

New York Theatre Ballet will present four ballets in an unforgettable evening. The program will include two world premieres by Nicolo Fonte and Pam Tanowitz. Nicolo Fonte is choreographing a 20-minute piece for four dancers inspired by the Brothers Grimm classic story “Hansel & Gretel” in a wholly contemporary esthetic, performed to a new score for piano and violin by Kevin Keller. Pam Tanowitz will create One Plus One, a new 13-minute ballet for ten dancers set to the Andante movement of Beethoven’s Sonata in D Major #15, which will be played live on piano two times at different tempos. The dance is based on the “pas de deux” and will be used as a metaphor for the age-old notion of unrequited love. The company will also revive Merce Cunningham’s trio Cross Currents, staged by Jennifer Goggans and with coaching by Carolyn Brown, performed to an arrangement by John Cage of Conlon Nancarrow’s Rhythm Studies for Player Piano Nos. 1-6. The evening is completed by a revival of Keith Michael’s The Alice-In-Wonderland Follies, which Broadway World called “A fantastic production…there is no more delightful or charming production to be found in New York City.”

New York Theatre Ballet (NYTB), founded in 1978 by artistic director Diana Byer, is the most widely seen chamber ballet company in the United States and has been hailed by The New York Times as “an invaluable company.” NYTB is dedicated to inspiring a love of dance in diverse audiences through performances of chamber ballet masterpieces and bold new works, as well as innovative one-hour ballets for children, all at affordable prices.