October 2013 Newsletter on Artists We Represent‏

THEATER FOR THE NEW CITY

a monthly update on artists we represent 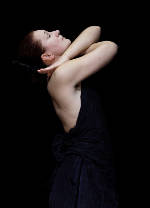 Prize-winning Swedish choreographer and butoh artist SU-EN, known for her large, colorful ensemble works, performs "SOOT," a new work with black as a theme. A solo dancer enters a world of leftover particles, depicting how civilization and cultural human behavior relinquish remnants that cannot be controlled or discarded.

The SU-EN Butoh Company was launched in Japan in 1992 and relocated to Haglund Skola, north of Uppsala (Sweden), in 1994. It just celebrated its 20th Anniversary. The troupe tours domestically and internationally; this piece has been performed in Seattle, Stockholm and Malmö.

Critic Giles Kennedy has written, "There is a ferocious integrity to the butoh body of SU-EN. The beauty is poetic, its treatment of the flesh and its decay concrete. It is a modern, yet timeless, exploration of what it is to be alive. This performance makes no excuses, accepts no compromises in its contemplation of the expressive qualities of the flesh."