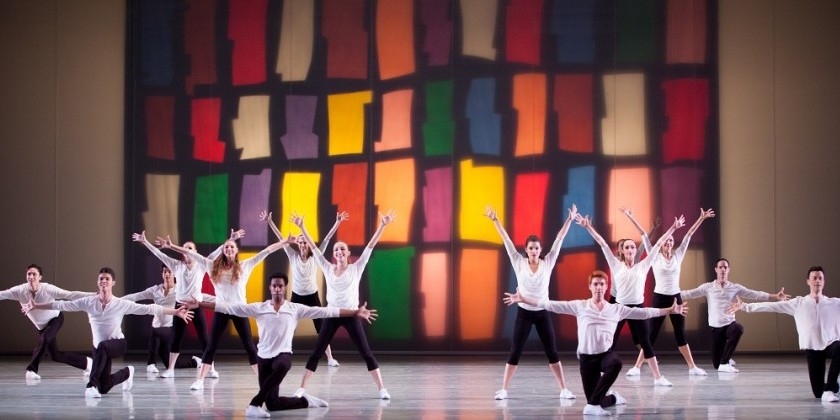 Philadelphia, PA (March 31, 2015) – Pennsylvania Ballet’s Artistic Director Angel Corella has announced the repertoire for the 2015-2016 Season. The Company’s 52nd season will be the first to have all of its ballets selected by Mr. Corella. Executive Director David Gray, also shared his organizational direction for Pennsylvania Ballet at an event last night.

With the 2015-2016 Season, Corella is working to raise the level and broaden the scope of programming for Pennsylvania Ballet. The Season’s programming embodies the themes of classic, contemporary and cutting edge pieces that include a world premiere and several company premieres in combination with more traditional company favorites like George Balanchine’s The Nutcracker.

“When creating my first artistic season, I wanted to continue the Balanchine tradition and have included more of his works this season than have been done in recent years,” said Corella. “I also wanted to include progressive works that have never been done to diversify the performances for the audience while challenging the dancers to move out of their comfort zone.”

Pennsylvania Ballet will also take part in Bryn Mawr College’s Performing Arts Series - Trisha Brown: In the New Body, with the presentation of Brown’s O Zlozony/O Composite. Pennsylvania Ballet is the first ballet company in the United States to perform her work.

In his first season with Pennsylvania Ballet, Corella has worked to create a more culturally diverse company of dancers. Just as Corella is working to increase the level and widen the range of repertoire performed, he is also working personally with the dancers to improve their artistry and make them as versatile as possible. In order to perform traditional choreographers like Balanchine and Jerome Robbins as well as current choreographers like Nacho Duato, Christopher Wheeldon, Wayne McGregor, Justin Peck, and Liam Scarlett, the Company must have dancers with diverse technical training. This season Corella added dancers that include:
- Russell Ducker, a native of the United Kingdom, who studied at the Royal Ballet School and danced leading roles in many classic ballets in addition to his appearance in a production of Oklahoma with Hugh Jackman.
- Oksana Maslova, a native of Ukraine, who graduated from the Kiev Choreographic College and a master’s degree in choreography from the Institute of Culture and Arts.
- Mayara Pineiro, originally from Cuba, was hired at the beginning of the season and promoted to Soloist in March, studied at the Cuban National Ballet School under the direction of legendary master teacher Ramona de Saa.

Corella will continue to look for dancers with diverse backgrounds and experience to join Pennsylvania Ballet.

With the recent appointment of David Gray as Executive Director, the new infrastructure of the organization is finally in place. As Gray takes on this permanent leadership role he will continue to work closely with the board to foster long-term growth and success. Over the next several years, Gray’s goal is to engage new audiences by showing them why they should love Pennsylvania Ballet. This will be accomplished over time through additional community engagement programs for seniors and schoolchildren, focusing on the School of Pennsylvania Ballet, and sharing the stories of the organization and the Company artists in order to encourage excitement beyond the season performances.

“Philadelphia has a high quality, supportive arts and culture community that needs to be better showcased,” said David Gray. “I look forward to expanding the reach of Pennsylvania Ballet and enriching the lives of our community members and arts lovers with this season’s performances and programming.”

Pennsylvania Ballet’s 52nd Season opens up with expressive movement driven by epic music. In George Balanchine’s Concerto Barocco, the first ballet performed by Pennsylvania Ballet in 1963, the dancers wearing simple costumes inspired by practice clothes to portray movement inspired by the syncopation and rhythm of Johann Sebastian Bach’s vivacious score. A company premiere for Pennsylvania Ballet, Wayne McGregor’s Chroma brings sensory surprises to the stage with sumptuous movement, a disruption of space and a driving score by Joby Talbot with orchestrations of songs by the White Stripes. Another company premiere for Pennsylvania Ballet, Christopher Wheeldon’s DGV conveys the timeless romance of travel alongside the wonder of modern technology through dynamic rhythms and shifting sound landscapes by Michael Nyman.

Take an emotional journey with Pennsylvania Ballet as the Company premieres Nacho Duato’s Arenal. This contrasting piece portrays the ups and down of everyday life, inspired by the popular melodies and songs composed and adapted by María del Mar Bonet. Jerome Robbins’ NY Export: Opus Jazz experiments with movements to cool jazz and angst-ridden beats, reflecting the post-war era of city streets bustling with teens expressing their outlooks and attitudes. The abstract ballet is set to music with complex rhythms by Robert Prince. Justin Peck’s Chutes and Ladders is primarily an interpretation of the music, exposing details of the music through movement. Set to Benjamin Britten’s String Quartet No. 1 in D Major, this Company premiere covers a range of moods and tempos as the string quartet performs onstage with the dancers. For Four was created in California in 2006 for Kings of the Dance, an all-star showcase of top male ballet dancers. The piece displays a quartet to Schubert’s “Death and Maiden.” The choreography makes the best use of four men dancing together.

Don Quixote, a classic comedy, features fancy footwork, authentic Spanish flavored dance, and comic interludes bringing to life the story based on Cervantes’ classic novel. In the ballet, the idealistic, eccentric Don Quixote goes on a quest in search of his ideal woman Dulcinea – while real-life lovers Kitri and Basilio battle against all odds to unite in true love.

Experience a milestone in the history of dance with George Balanchine’s Serenade, set to the classic score of Tchaikovsky’s Serenade for Strings in C, Op. 48. The first original ballet Balanchine created in America, Serenade incorporates unexpected rehearsal events into the choreography such as students falling or arriving late. Heralded by The New York Times as “one of today’s foremost dance poets,” Choreographer in Residence Matthew Neenan conceives his world premiere for the Company. In Asphodel Meadows, a company and North American premiere, Liam Scarlett presents three compelling pas de deuxs, which mirror Francis Poulenc’s vigorous dialogue between two pianos. This contemporary interpretation of classical style closely follows Poulenc’s score and quickly shifts in mood throughout the piece.

Witness the diversity of the human body in George Balanchine’s The Four Temperaments, a ballet inspired by the medieval belief that human beings are made up of four different humors that determine a person’s temperament. In this ballet set to a score by Paul Hindemith, the dancers fill the stage with a variety of emotions ranging from gloom, to passion, to anger. In Hans Van Manen’s Hammerklavier, three couples enact a series of encounters which never quite achieve resolution. The dancers perform elaborate choreography alongside a bold score by Ludwig Van Beethoven, constantly disrupting the choreography in a beautiful manner. Trisha Brown brings two Polish poems to life in O Zlozny/O Composite, a company premiere for Pennsylvania Ballet. The choreography interweaves movement with verses as the dancers perform with a strange, dream-like quality to Polish recitations of the poems and a score by Laurie Anderson.

Pennsylvania Ballet’s season sponsors include DoubleTree by Hilton Hotel, The Sporting Club at the Bellevue, and US Airways-American Airlines. George Balanchine’s The Nutcracker™ is sponsored by First Niagara Bank.

Pennsylvania Ballet receives support from the Pennsylvania Council on the Arts – a state agency funded by the Commonwealth of Pennsylvania and the National Endowment for the Arts, a federal agency – and The Philadelphia Cultural Fund.

Groups of 10 or more get discounts and great seats! Ask about special talks with staff and dancers and dining options near the theater for your group. For tickets and more information, contact Group Sales Manager Arajua Backman at 215.587.6921 or abackman@paballet.org.