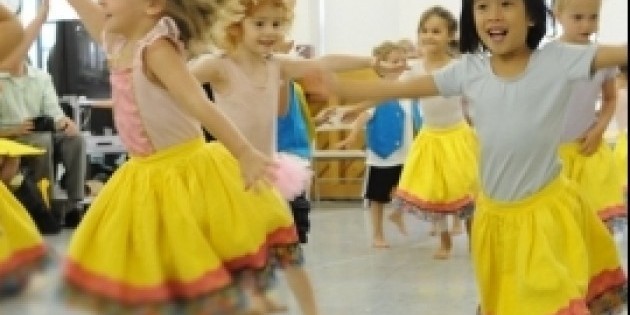 Featuring the Dance and Culture of Latin America

Ballet Hispanico, recognized as the nation's leading Latino dance organization since 1970, announces the 2013 Pre-School Summer Dance Camps to be held weekly from June 10 - July 12 for boys and girls ages 3-5. Through fun and engaging classes, children explore the sounds, movement, stories, and art of Cuba (June 10-14), Colombia (June 17-21), Mexico (June 24-28), and Peru (July 8-12). The camps run Monday-Friday from 9am-12pm and feature weekly in-studio presentations for parents. Tuition is 30 per week-long camp. For more information or to register, please contact the school office at 212-362-6710 or visit www.ballethispanico.org.

The goal of the Pre-School Summer Dance Camps is to introduce children to four diverse cultures of Latin America, while encouraging them to build creative skills in an environment that is safe, accessible, and inclusive.  The camps focus on the dances, songs, stories, and rhythms of Latin America through offerings such as creative movement class, the physical interpretation of Latin American children's literature, and the exploration of musical elements and percussion.

June 10-14: Cuba  Discover the country that never stops dancing! Children will create their own maracas and explore the different rhythms of Cuban music such as son, mambo, and cha-cha-cha. Frolic on the beautiful beach of Paradero, dance in the streets of La Habana and climb the highest mountain in Cuba, El Pico Turquino.

June 17-21: Colombia  Take an imaginary journey from the capital city of Bogotá all the way to Barranquilla where the Carnival awaits! Traveling through the Andes Mountains, tropical grasslands and Amazonian rainforest, children will discover exotic animals like the Andean Condor, and dance to the fascinating Afro-Colombian rhythms of Cumbia and Vallenato.

June 24-28: Mexico   Travel the picturesque landscapes and bustling cities of modern Mexico while uncovering the legends of the ancient Mayans and Aztecs. Children will celebrate the culture's rich history through songs, art making and fiestas such as Cinco de Mayo. Grab a sombrero, and get ready to explore the exciting movements of traditional Mexican dances.

July 8-12: Peru
Do you ever wonder where potatoes, tomatoes and avocados come from? Then jump into the ancient culture of the Incas and travel the magical lands of Machu Picchu to find out! Discover the life of a child from the Peruvian Andes and explore the different dances of this incredible country, such as el Baile de Ayacucho, Llanera and Baile de Cusco.

ABOUT THE BALLET HISPANICO SCHOOL OF DANCE

The Ballet Hispanico School of Dance is one of the nation's leading training programs, offering a balanced core curriculum in ballet, modern and Spanish dance-a practice that is unique among America's dance education institutions. Students receive a thorough grounding in the primary techniques required for a successful performing career, along with specialized training in the rich and varied Latino dance traditions which, for many, reflects their cultural heritage. Under an internationally renowned faculty led by seasoned arts advocate and School Director AnaMaria Correa, students are exposed to three signature training programs and a bevy of performance opportunities. Alumni of the School have gone on to careers in theater, film, and television, as well as careers with leading dance companies such as Ballet Hispanico, Alvin Ailey, Paul Taylor, ABT II, and the San Francisco Ballet.

Celebrating 42 years of dance and culture, Ballet Hispanico is recognized as the nation's premier Latino dance organization. Led by Artistic Director Eduardo Vilaro, the Company boasts a rich and diverse repertory of over 100 works by the foremost choreographers and emerging artists of our time. The works expand on founder Tina Ramirez's legacy of exploring the diversity of Latino culture through a fusion of classical, Latin, and contemporary dance powered by theatricality and passion.  The Company has performed for an audience of nearly 3 million, throughout 11 countries, on 3 continents.  For more information, visit www.ballethispanico.org. Follow Ballet Hispanico on Facebook and Twitter.