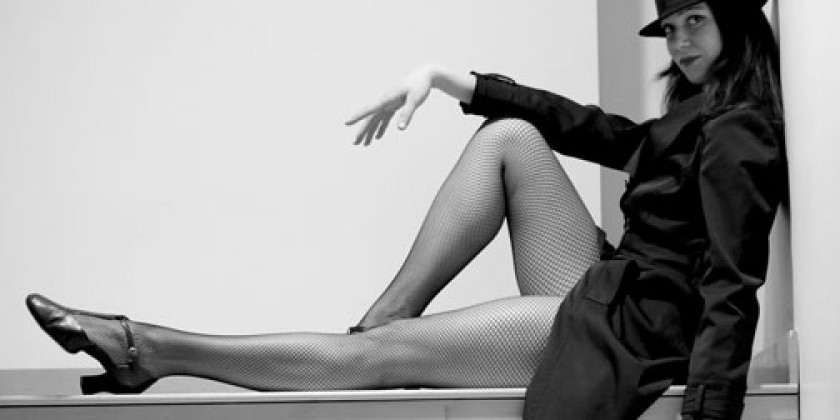 General Mischief Dance Theatre is dedicated to reinforcing the power that joy and laughter have in communicating ideas.  The company's mission is to create and present theatrical dance works that engage audiences emotionally, socially, and kinesthetically.  Combining aerial work with more earthbound forms of movement, the company removes spatial and physical limits from theatrical dance.

Duel, an interactive bungee duet, choreographed by Emily Smyth Vartanian
Duel is a face-off between rival baseball fans (Yankees v. Red Sox).  They appear to have made peace by the time flying balls are added to the equation, but the very end of the dance calls that notion into question.

Buzz, choreographed by Emily Smyth Vartanian
Buzz is a multi-part, caffeinated cityscape of a dance.  It shows the dancers slowly waking up in the morning, then features them interacting with various objects typical to the morning commute - coffee cups, books, and cell phones - as well as each other.  The majority of the time, they pass each other by, unnoticed, but as the piece goes on they begin to connect with each other.  The next section, lit only by the dancers' cell phones, takes place late at night and shows the dancers "connected" electronically, but not connected to the individuals they are supposedly spending time with.

"Question: What's the difference between a performance by General Mischief Dance Theatre and entertainment at a child's birthday party? Answer: Nothing. Except that the party isn't just for children, the performers are highly competent dancers, and you go to see them at a theater. And it's much better... Intelligent silliness....entertainingly performed." - Ballet-Dance

Lizzie Hagstedt is a new member of the BMI Lehman Engel Advanced Musical Theatre Workshop.  This past summer she saw a reading of her musical "Rose Petals" at the NYMF just one week after her musical Oneida was heard at the VOX Festival at Dartmouth College. Other current projects include musicalizing the YA novel Camo Girl and participating as one of the featured writers in Prospect Theater Company's Musical Theatre Lab this spring.  An avid performer & member of Actors' Equity, credits include the new musical Southern Comfort at Barrington Stage Company, the NAMT, & CAP21 as well as the national tour of "Sweeney Todd". www.lizziehagstedt.com

ABOUT GENERAL MISCHIEF
General Mischief Dance Theatre was founded informally in 2004 as an artistic collaboration between performer/choreographer Emily Smyth Vartanian, rigger/lighting designer Mark Baker and sound designer/choreographic advisor Adam Vartanian.  The company was formally incorporated in 2008 in the interest of actively producing theatrical dance pieces that reinforce the power that joy and laughter have in communicating ideas, as well as to encourage the natural human desire to express oneself through movement.  The company has previously presented interactive events at Manhattan Movement and Arts Center, The Connelly Theater, Theater for the New City, New York City Center Studios, and The Zipper Theater amongst other venues.  They have also been invited to perform at the JCC, Dance Manhattan, and Brooklyn's Kumble Theater as well as numerous festivals and special events.  The company has also received multiple grants from the Lower Manhattan Cultural Council to support the presentation of their interactive dance adventures.  For more information, please visit www.generalmischief.com.

ABOUT THE CONNELLY THEATRE
The Connelly Theater reopened in February 1997 after ten years of darkness. Located in the historic 19th Century school building at 220 East 4th Street, this beautiful 99-seat miniature opera house features air conditioning, a pressed tin ceiling and proscenium arch over a raised stage, and a horseshoe-shaped balcony.

The space is a popular off-off-Broadway venue for non-profit theater companies and plays host to The New York International Fringe Festival each summer.  The theater is also used as a site for community meetings such as the First Lower East Side Girls' Congress, as well as throughout the year for students' drama, art and music presentations.