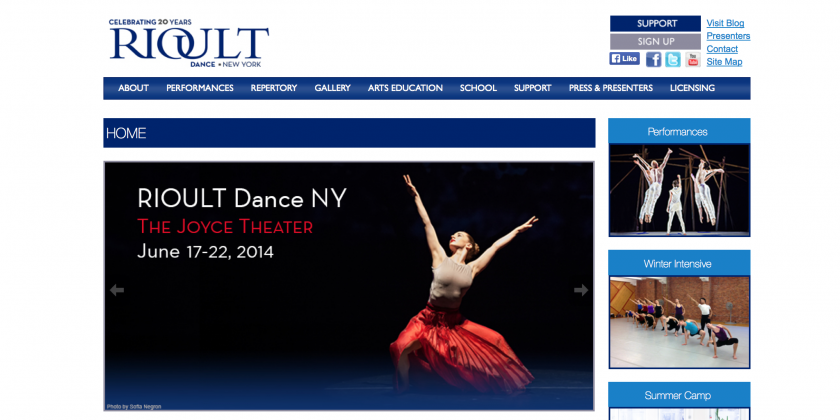 In Celebration of 20th Anniversary Season

In celebration of their 20th Anniversary, RIOULT Dance NY has launched its new website, still at www.rioult.org, created by PC Umbrella. Crafted with the user experience firmly in mind, the website has been designed using the latest technology so the site is compatible with today's browsers and mobile devices. The vibrant and engaging redesign offers a more contemporary feel and a more interactive user experience with newly developed media content and social media integration among some of its many enhanced resources. This next generation website features a clean interface to facilitate the ease of use for any of the company's numerous, specific audiences:

-     Schools with interest in the education program can visit www.rioult.org/arts-education/dancereach/

-     Colleges and universities looking to license the company’s works can visit www.rioult.org/licensing/about/

-     Dancers can learn about our upcoming class schedules available at www.rioult.org/school/intensives/

-      Parents can earn about our children’s programs: http://www.rioult.org/school/kids-camp/

-     Potential supporters and donors are encouraged to visit www.rioult.org/support/contribute/

“To kick off a year-long celebration of our 20th Anniversary season, we have created a new website that illustrates and reflects our artistry, history and mission,” said Pascal Rioult, Artistic Director of RIOULT Dance NY.  “The site, created by PC Umbrella, celebrates our past and will carry us into our future as we continue to explore our craft and develop new works.”

PC Umbrella was founded by Andy Lebeau in 2005. Formed with the home user and small business in mind, PC Umbrella offers internet and computer services including IT Departments and Computer Repair Services.

RIOULT Dance NY, celebrating its 20th Anniversary in the 2013-2014 Season, fast became an established name in modern dance with a reputation for bringing the sensual, articulate and musical dance works of Pascal Rioult to audiences worldwide. The twelve dancer company, based in New York City, is led by husband-and-wife team Artistic Director/Choreographer Pascal Rioult and Associate Artistic Director Joyce Herring - both former Martha Graham Dance Company principal dancers. With an established repertoire of over 40 dances that expands each year, RIOULT Dance NY presents an annual New York Season and tours nationally and abroad. In addition, in-school arts education and community outreach have been integral to the company since its inception, introducing students and families to the art of modern dance.