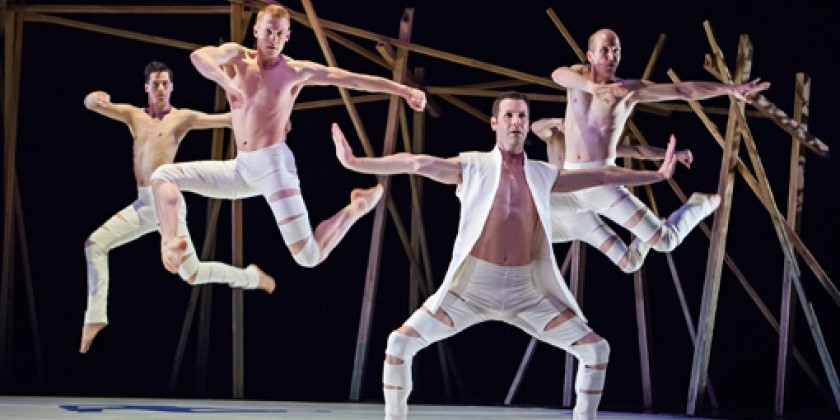 RIOULT Dance NY, a leading American modern dance company with a classic sensibility, will present its 2014 Gala Performance and Dinner (featuring a raffle) on Wednesday, June 18, 2014. The performance will begin at 7pm at The Joyce Theater, 175 Eighth Avenue (at 19th Street), NYC, and the Gala Dinner will follow the performance at Metropolitan Pavilion, 123 West 18th Street (between 6th and 7th Aves). This special evening will honor the company's influential, founding supporters, Donald L. Holley, Esq. and Paul Lepercq (in memoriam). Festive attire suggested. For more information and tickets, please call 212-398-5901 or email gala@rioult.org.

Described by The Huffington Post as "captivating" and "intensely musical," the company celebrates its 20th Anniversary with two programs highlighting Artistic Director Pascal Rioult's powerful choreography, profound humanity, and extraordinary dancers. The evening's program will include May O'Donnell's classic Suspension (1943), and Martha Graham's iconic El Penitente (1940). Rioult's Black Diamond (2003) and Views of the Fleeting World (2008) round out the program.

The Gala Dinner will include a raffle to win an 8-day Cruise along the Danube, from Viking River Cruises; this terrific prize is valued at $8,119. Raffle tickets are: 1 for $100, 3 for $250, or 15 for $1,000. No need to be present at Gala to win. Tickets for the raffle can be purchased at www.rioult.org (http://www.rioult.org/performances/gala/#vikingcruise) or by calling 212-398-5901. Viking River Cruises believes it's important to support the arts, and is a proud sponsor of RIOULT Dance NY's 20th Anniversary Season.

In Suspension, dancers move in a state of suspended balance and order where harmony is maintained by the independent patterns which join, separate, energize, and become tension points for each other to maintain the order and balance of the whole. The idea and ideal of Suspension uses the dance as a medium where harmony and balance are maintained between individuals. It might be said that Suspension is like the planetary system existing in space and eternity, where each planet maintains a position of independence and balance in relation to the whole. "...at the still point of the turning world, there the dance is..." - T.S. Eliot. Suspension (1943) has been set on the company by former May O'Donnell Dance Company dancers Lynn Frielinghaus, Nancy Lushington, and Barbara Allegra Verlezza.

El Penitente premiered in 1940 at Bennington College in Vermont, part of the Bennington School of the Dance, now the American Dance Festival. The dance has the look of primitive folk art come to life. Born out of Martha Graham's fascination with the American southwest and specifically a sect of Penitents who believed in purification through severe penance, the dance has a simple formalism, episodic structure and naïve, archaic gestures. Constructed as a play within a play, El Penitente opens with the entrance of a troupe of strolling players. They don their costumes and enact a series of vignettes from the Bible. Audiences see a childlike pageant that includes flagellation, revelation, seduction, repentance, crucifixion, and salvation - a stylized meshing of dance of celebration perhaps meant to inspire the generosity of the onlookers. El Penitente (1940) is set to music by Louis Horst. The piece was set for RIOULT with Pascal Rioult, Joyce Herring, and Kenneth Topping all teaching their former roles to current dancers.

Views of the Fleeting World (2008) was inspired by the ancient woodblock prints of the Japanese master Hiroshige and the ingenious structure of Bach's musical score. The ephemeral quality of all living things and the eternal cycle of life are the themes that Rioult found common, and explored in this contemporary dance work. Each of the nine short vignettes - "Orchard," "Gathering Storm," "Wild Horses," "Dusk, Rain," "Night Ride," "Summer Wind," "Moonlight," and "Flowing River" - captures a moment in time and nature through the colors, lines, and rhythm of the dance. These moments reflect the depth of emotion that can be found in such seemingly spare and simple elements.