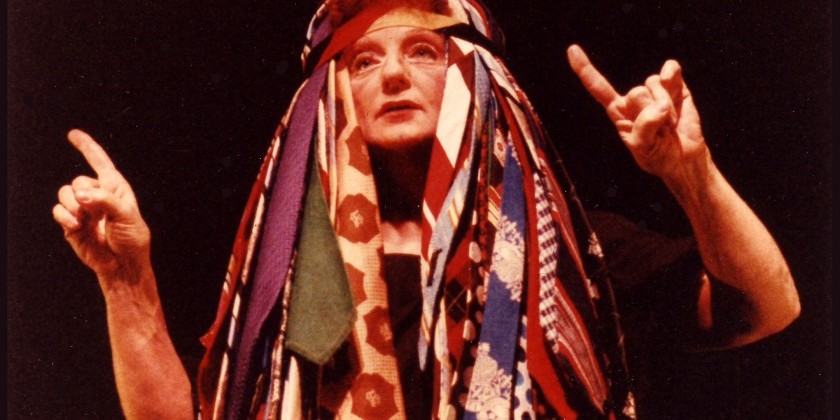 It is with great sadness that I note the passing of the celebrated dancer/actress Beverly Blossom (August 28, 1926 - November 1, 2014)

A true original, Beverly was born Beverly Schmidt in Chicago and studied dance, piano, and elocution as a child.   Her first dance appearance seems to have occurred when she was five years old, when she participated in a huge spectacle at Soldier Field with many other children, "probably one of the government-sponsored W.P.A. art projects of its time, since it was during the Great Depression of the early 1930's," she recalled.   While attending Carleton College in Chicago, she met and studied dance with Nancy Hauser, and after receiving a Bachelors Degree from Roosevelt College in 1950, she moved to New York City to continue her dance training.   In New York Beverly joined Alwin Nikolais Dance Company and performed with them from 1953 to 1963.   In 1957, she took a leave of absence from the Nikolais Company when she was granted a Fulbright Fellowship for a year in Europe to study with Mary Wigman in West Berlin. Returning to her home state in the late 1960's, Beverly served as professor at the University of Illinois at Urbana-Champaign from 1967 to 1990 and, after retiring, had Professor Emeritus status at the University of Illinois.

Beverly continued to produce numerous concerts of her own dance/theater works in New York starting in the 1960s.  A Beverly Blossom concert was always a highlight of the New York dance season, delighting audiences with her unique theatricality, wit, and a one-of-a-kind personality.   Her works were funded by the National Endowment for the Art and the New York State Council on the Arts, among others; she was awarded a Bessie for sustained achievement in 1993, and received the 2009 Martha Hill Award for lifetime achievement in dance.

Blossom was married in the late 1960s to late actor Roberts Blossom and is survived by a son, Michael Blossom, owner of the Florodora women's boutiques in downtown Chicago.