Rhythm is Our Business + Rhythm in Motion 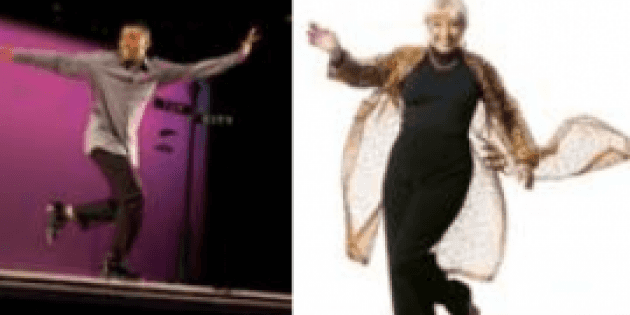 TWO NEW PRODUCTIONS HERALD A WEEK OF TAP
MARCH 19-24 AT THE THEATER AT THE 14th ST Y
“Rhythm is Our Business” and “Rhythm in Motion” Present the Golden Age of Swing Plus New Work by Michelle Dorrance, Cartier Williams and Brenda Bufalino
New York, NY, March 5, 2013 – Two separate programs, showcasing the rich diversity of American tap dance, will be on view for six nights beginning Tuesday, March 19 at the Theater at the 14th Street Y. Rhythm is Our Business, an American Tap Dance Foundation (ATDF) production in association with The Duke Ellington Center for the Arts, will feature a look back at classic nightclub/cabaret hoofing, singing and Swing, accompanied by The Duke Ellington Center Band. The program will run through Thursday, March 21.  Rhythm in Motion, an evening of new work highlighting New York’s most renowned tappers and choreographers in the field today, will premiere Friday, March 22 and continue through Sunday, March 24.
Performances by Ali Bradley, Brian Davis, Khalid Hill, Jason Janas, Mable Lee, Andrew Nemr, Hank Smith and The Shufflettes will be featured in Rhythm is Our Business, a production honoring the golden age of Swing. Derick K. Grant is choreographing and directing the program. Rhythm in Motion will feature contemporary new work stretching the boundaries of the form, with tap luminaries Michelle Dorrance, Derick K. Grant, Kazu Kumagai, Max Pollak, Lynn Schwab, the Tap City Youth Ensemble and Cartier Williams participating. Rhythm in Motion will also feature a special appearance and new ensemble piece by tap legend Brenda Bufalino.
Michelle Dorrance, founder and artistic director of Dorrance Dance, has won numerous awards including the 2012 Princess Grace Award, the 2012 Rockefeller Foundation Award and the 2011 Bessie Award; Derick K. Grant was an original company member and Dance Captain for Bring In ‘Da Noise, Bring In ‘Da Funk at both The Public Theater and on Broadway. He also created the critically acclaimed show Imagine Tap! and continues to transform and inspire dance communities around the world; young gun Cartier Williams, protégé of Savion Glover, was youngest of the "Apollo Legends” and was a featured performer in Tony Award winning Bring In ‘Da Noise, Bring In ‘Da Funk; legendary dancer and choreographer Brenda Bufalino, renowned for her orchestral and contrapuntal ensemble choreography, is a distinguished senior figure in the field.
“Our March productions celebrate the art of Tap Dance and expand and challenge the limited perception that tap is considered either too old-fashioned or too commercial to be taken seriously,” said Tony Waag, Artistic/Executive Director of ATDF. “There are many different styles of tap dance today, all valid and all incredibly interesting, complex and diverse. Most people have no idea tap dance is practiced, presented and perfected all over the world. Though it was developed and incubated in lower Manhattan and born from a melting pot of cultures, it has now been embraced by tappers throughout the globe, from Australia to Brazil, Cuba, Germany, Japan, Spain and more. Our March productions celebrate and honor our past as well as present the future of tap… a future that is exciting, fascinating and filled with variety,” he said.
ATDF is a non-profit organization committed to establishing and legitimizing Tap Dance as a vital component of American Dance through creation, presentation, education and preservation. The organization is in a unique position as both a promoter of the new and preserver of the living history of tap dance as an art form.
ATDF has spearheaded the development of The Gregory Hines Collection of American Tap Dance Archives at the New York Public Library for the Performing Arts at Lincoln Center, and has newly partnered with the Middle School Jazz Academy, an education program at Jazz at Lincoln Center.
#  #  #
VENUE:
The Theater at the 14th Street Y
344 East 14th St (between 1st and 2nd Avenues)
New York, NY 10003
General Information: 212-780-0800
“RHYTHM IS OUR BUSINESS”
Tuesday, March 19 to Thursday, March 21 at 7pm and 9:30 PM
http://www.brownpapertickets.com/event/327158
“RHYTHM IN MOTION”
Friday, March 22 to Saturday, March 23 at 7pm and 9:30pm
Sunday, March 24 - 3pm
http://www.brownpapertickets.com/event/327849
TICKETS:
Call 800-838-3006 ext. #1 or order online:
“Rhythm is Our Business” - http://www.brownpapertickets.com/event/327158
“Rhythm in Motion” - http://www.brownpapertickets.com/event/327849
0 General Admission (Onsite/Day of Show: 5)
5 Children, Students, Seniors & Groups of 10 or more (Onsite/Day of Show: 0)
**75 VIP Donor Tickets for purchase through http://atdf.org/ or call 646-230-9564. VIP Donor Seats include priority seating/refreshments/0 deduction credit.
ABOUT THE AMERICAN TAP DANCE FOUNDATION
ADTF was founded in 1986 by tap master Charles “Honi” Coles, his protégée Brenda Bufalino, and the Foundation’s current artistic and executive director, Tony Waag. Called the American Tap Dance Orchestra until 2001, the organization was directed and choreographed by Ms. Bufalino and presented hundreds of stage performances and films from 1986 through 1999. From 1989 to 1995, it also operated Woodpeckers Tap Dance Center, where tappers from all over the world gathered for classes, workshops, jam session and performances. In 2002 with a new generation of tap dancers and enthusiasts, the Orchestra was renamed under the artistic direction and leadership of Tony Waag.