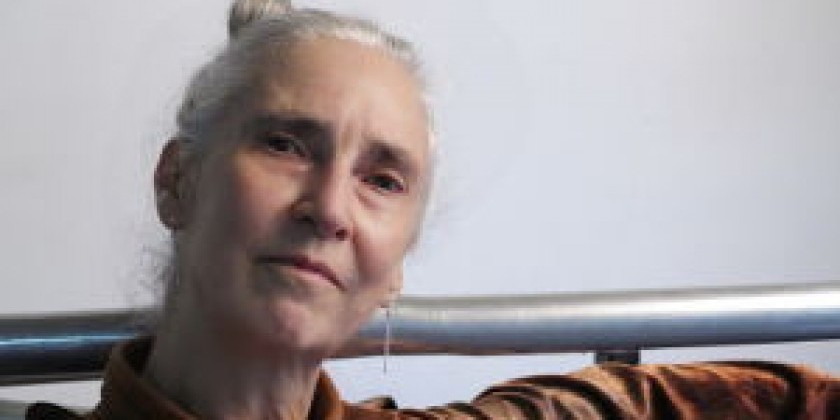 Vencl began choreographing when she was almost old enough to collect Social Security and she gets philosophical about the passage of time.

NEW YORK – Susan Vencl began choreographing late in life -- when she was almost old enough to collect Social Security -- and she gets philosophical about the passage of time.  "Your past and future are embedded in the present moment," she says.  That idea drives "Long Before Afterward," her dance of sliding movement, sweeping turns and Grecian patterns which play with our perspective in sometimes mathematical ways.  The Hawkins- and Limon-influenced piece will be performed to a suite of nine expressionistic works by acclaimed composer Arlene Sierra and will be presented by Susan Vencl Dance for its debut February 19, 20 and 21 at 8:00 PM at Graham Center of Contemporary Dance, 55 Bethune Street.

The 50 minute dance will be preceded by a twelve-minute musical piece, "Avian Mirrors" by Arlene Sierra, performed live by violinist Jesse Mills and cellist Raman Ramakrishnan.

Her philosophy career path was interrupted by a 10-year period of intense depression, from which she was rescued by dance.  Out of desperation at her seemingly intractable depression, her mother suggested that Susan take a dance class.  Out of concern for her mother, she did.  It was taught at the Fairmount Center for the Performing Arts by its then founder-director, Libby Lubinger, a New York-trained Spanish dancer.  The first class--Vencl's first dance class ever--broke the depression.  She experienced her body as a musical instrument, or rather several musical instruments, at once. At this point, Vencl was 37.  She continued studying with Lubinger, training in all forms of dance but especially Spanish dance, which she also performed.  Gradually her focus shifted to Modern Dance and she began taking Hawkins-based classes at Case Western Reserve University as a special audit student.

In 1986 she entered Case Western's very small, very intense MFA program.  The program included two technique classes daily: one from Kathy Karipides, Chairwoman of the Department, and one from Kelly Holt, former lead dancer with the Erick Hawkins Company.  The program included four semesters of choreography brilliantly designed and taught by Kelly Holt and two to four semesters of Eurhythmics taught by David Brown at the Cleveland Institute of Music.  Vencl now relates, “From Kelly [Holt] I learned that I could communicate non verbally.  When he told me to do down stage right what I had done upstage left, I knew intuitively what he meant.  I learned how to make my arm, or the right side of my head, disappear for the viewer. I could disappear center stage and dominate the stage from upstage left.  We all could.  I learned to image and through that to distinguish in myself the difference between novelty and creativity.  He taught me that I choreograph by instinct: like an ant I find my way; like the lead hound dog, I catch the scent and then keep my nose to the ground and never loose the scent.”  For her MFA concert, Vencl choreographed a 37 minute sextet, "Totem," with music by Californian Harry Partch.  She graduated in 1990.

In 1992 she arrived in New York powerfully prepared but terribly ignorant and roomed in the East Village with former Cunningham dancer Ellen Cornfield, who had formed her own company. “I learned from the City and I learned from my friend.  I was 50 years old and beginning,” says Vencl.  We often see choreographers who prolong their careers into their mature years, but few who jump start them there.  Nowadays Ms. Vencl, ever philosophical, says she does not worry about being able to "make it" as a choreographer, she just has to get used to having less time to enjoy it.

Between 1992 and 1995, she joined with other New York City based choreographers--among them, Jim May, Ellen Cornfield, Lynn Wichern--to produce two concerts and in 1995, began choreographing a 20-minute piece named "Alone." That process spawned the formation of Vencl Dance Trio in the fall of 1997.  The Trio gave its first concert in January 1999 which included the formal premiers of two trios, "Alone" and "Air," separated by a 20 minute suite of solos selected and performed by classical guitarist Thomas Millioto. Three Trio concerts followed, all with similar programming: dances to CD’s of minimalist composers, mostly New York City based  (John Cage, Toshio Hosokawa, Morton Feldman, Iannis Xenakis, even Bela Bartok) combined with a young musician performing (usually his/her own work) live. A concert in 2009 departed from this structure and made possible a major technological contribution by lighting designer and sound technician Mike Riggs.  But "Long Before Afterward" returns to this programming format.

Normally, Vencl takes five ballet classes a week but when in rehearsal she takes three.  She is 5’ 6” and describes her body as flexible, long limbed with a "low center of gravity," so she likes turning, twisting and changing direction.   She has  "an appetite for jumps, turns and complex stepping patterns."  All this is reflected in her choreographic style, which is immediately recognizable. She casts dancers with little regard for body type, sex or age; merely those who connect with her movement material.  Vencl's work requires strong ballet base plus extensive experience in one modern dance technique (Limon, Cunningham, Horton, Graham, etc.).

Arlene Sierra (www.arlenesierra.com), an American composer based in London, writes music that takes impetus from such sources as military strategy, game theory, Darwinian evolution and the natural world. Critics have praised her “highly flexible and distinctive style” (The Guardian) and her “remarkable brilliance of color, rhythmic dexterity and playfulness” (NPR Classical). Declared “a name to watch” by BBC Music Magazine, Sierra is the subject of a critically-acclaimed series of portrait discs with Bridge Records. She has received fellowships from the American Academy of Arts and Letters, the MacDowell Colony and the Tanglewood Music Festival, and has had portrait concerts at the Crush Room, Royal Opera House, London, the Yellow Barn Music Festival, Vermont and Columbia University’s Miller Theatre. A Takemitsu Prize-winner and Latin GRAMMY nominee, Sierra has received commissions from the New York Philharmonic, Seattle Symphony, Bremen Philharmonic Society, BBC National Orchestra of Wales, the Cheltenham, Huddersfield and Tanglewood Music Festivals, and many ensembles and soloists. Other performers of her work include the Tokyo Philharmonic, London Sinfonietta, New York City Opera VOX, International Contemporary Ensemble, Carducci Quartet, Lontano, and the Benedetti-Elschenbroich- Grynyuk Trio at the BBC Proms. She holds degrees from Oberlin College- Conservatory (BA, Bmus), Yale School of Music (Mmus) and the University of Michigan (DMA).X

"Long Before Afterward" is a sponsored project of Fractured Atlas, a non-profit arts service organization.