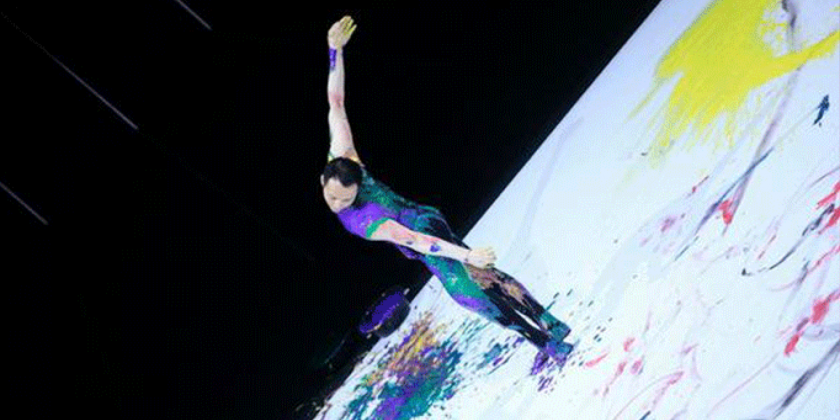 New York, New York – Shen Wei Dance Arts, internationally renowned for its unique, cross-cultural body of work, will present a week-long engagement at the Judson Memorial Church, 55 Washington Square, in New York City. The performances will take place Tuesday, April 29 through Sunday, May 4, 2014. The program will feature the World Premiere of a new work by Shen Wei to music by John Adams and Arvo Pärt along with a revival of Shen Wei’s Map (2005). Tickets go on sale January 15, 2014 and will be available online at shenweidancearts.org or by calling 866-811-4111.

The performances at the Judson Church will feature a revival of Map, Shen Wei's critically acclaimed work, last performed in New York City at the Lincoln Center Festival in 2005. Set to Steve Reich's Desert Music, Map is a physically dynamic work deeply rooted in Shen Wei's Natural Body Development Technique. It showcases the Company dancers’ flexibility and fluidity. The Washington Post raved, “The theme is circularity; how many different ways the body can rotate, swivel, swirl and wind. The variations on this theme are endlessly inventive, but what's especially striking is the comfy, gooey looseness of the movement…Map is wonderfully whimsical. It's also one of his most physically powerful works…sheer gorgeousness.” In bringing Map to a non-proscenium setting, Shen Wei will reconfigure the audience's relationship to the piece so that its dense patterning and floor work can be visible up close and from multiple vantage points with viewing from four sides. Shen Wei’s striking blackboard-like backdrop of brightly colored, slightly smudged directional etchings will become the dancing floor at the Judson Church.

The program will also feature a rare solo performance by Shen Wei. Set to music by John Adams and Arvo Pärt, this new dance, as yet untitled, will feature live musical accompaniment by Stephen Gosling. The work will explore movement inspired by Shen Wei's recent explorations into Chinese landscape painting and its unforced, yet powerful, energy.

Choreographer, director, dancer, painter and designer, Shen Wei is internationally renowned for his boldly visual movement-based spectacles. He is perhaps best known as the lead choreographer for the Opening Ceremonies of the 2008 Beijing Olympics, which won acclaim worldwide. The Washington Times has called Shen Wei “one of the great artists of our time.”

Admiration for his talent has earned Shen Wei numerous awards, including a MacArthur “Genius” Fellowship (2007), the U.S. Artists Fellow award and a John Simon Guggenheim Fellowship. Other accolades include: Australia’s Helpmann Award; the Nijinsky Emerging Choreographer Award; the World Economic Forum’s Young Global Leader Honor; the Algur H. Meadows Prize; and a 2012 New York City Center Choreography Fellowship. The impact of Shen Wei Dance Arts’ premiere performances on the Chinese mainland at Beijing’s National Centre for the Performing Arts led to a host of awards for Shen Wei: the Audi-China 2012 Artist of the Year Award; the Artist of the Year at the GQ-China magazine’s 2013 Man of the Year Awards; and most recently, the Chinese Innovator Award at the Wall Street Journal–China 2013.

Born in China’s Hunan province in 1968, the son of Chinese Opera professionals, he was trained from youth in the rigorous practice of Chinese opera performance, traditional Chinese ink painting and calligraphy and was a performer with the Hunan State Xian Opera Company from 1984 to 1989. During his student years, he studied Western visual art, which propelled an interest in modern dance. In 1991, at the age of 23, he became a founding member of the Guangdong Modern Dance Company, the first such company in China. In 1995, upon receipt of a fellowship, he moved to NYC to study with the Nikolais/Louis Dance Lab and was invited to present his work at the American Dance Festival. In July 2000, he founded Shen Wei Dance Arts (SWDA) and his Company quickly entered the international touring circuit.

Since forming his Company, he has received numerous commissions to support his creative works for Shen Wei Dance Arts including multiple commissions from the American Dance Festival, Het Muziektheater in Amsterdam, the Lincoln Center Festival and the Kennedy Center for the Performing Arts, as well as from The Metropolitan Museum of Art, the Park Avenue Armory, Hong Kong’s New Vision Arts Festival and the Edinburgh International Festival.

Shen Wei also created dances for Les Grands Ballets Canadiens de Montréal and Les Ballets de MonteaCarlo and choreographed the Rome Opera’s production of Rossini’s Moise et Pharaon, conducted by Ricardo Muti. Last spring, Shen Wei was commissioned to create a new work for the Dutch National Ballet in Amsterdam, and he choreographed, directed and designed a new production of Carmina Burana for the chorus, orchestra and ballet of Teatro di San Carlo in Naples, Italy. The production, which included Shen Wei Dance Arts’ dancers, premiered in July 2013 and toured to the Mariinsky Theater in St. Petersburg, Russia in September of 2013.

Recently, his work as a visual artist and choreographer has entered into a new dialogue in a series of performative installations and site-specific works which have been presented at a number of museums and galleries including: The Metropolitan Museum of Art; the North Carolina Museum of Art; Collezione Maramotti in Italy; Mana Contemporary; and the Forum at the Yerba Buena Center for the Arts.

Since its founding in 2000, Shen Wei Dance Arts has performed in 138 cities, in 28 countries, on five continents and has appeared at prestigious festivals and venues worldwide including: the Jacob’s Pillow Dance Festival, the Spoleto Festival, annual performances at the American Dance Festival, the Los Angeles Music Center, Venice Biennale, Sadler’s Wells, the Barbican Centre, Het Muziektheater, the Edinburgh International Festival, the Berliner Festpiele and the Sydney Festival. In the United States, Shen Wei Dance Arts has performed in 25 of the 50 states, gave the first dance performances on the concert stage at Frank Gehry’s Disney Hall in Los Angeles and has been presented five-times at the Lincoln Center Festival in New York City. The Company recently completed a unique 5-year performance residency at the Kennedy Center in Washington, D.C.

Recent company highlights include performances at the Festival de Danse in Cannes, France; the Ludwigshafen Festival in Germany; Festival Internacional de Artes Escénicas of  Lima in Peru; the Ravenna Festival in Italy; week-long engagements at San Francisco’s Yerba Buena Center for the Arts and Washington, D.C.’s Kennedy Center for the Performing Arts; a three-city tour of Brazil; and a three-week tour to China with performances at Hong Kong’s New Vision Arts Festival and Beijing’s National Center for the Performing Arts. The performances in Beijing marked the first time an émigré choreographer was invited to bring his company to the Chinese Mainland. Upcoming performances include the Dallas Opera House in Texas; the Festival Iberoamericano de Teatro in Bogotá, Columbia; the Stanislavsky Theatre in Moscow, Russia; the Mariinsky II in St. Petersburg, Russia; and the Shanghai International Arts Festival in China.