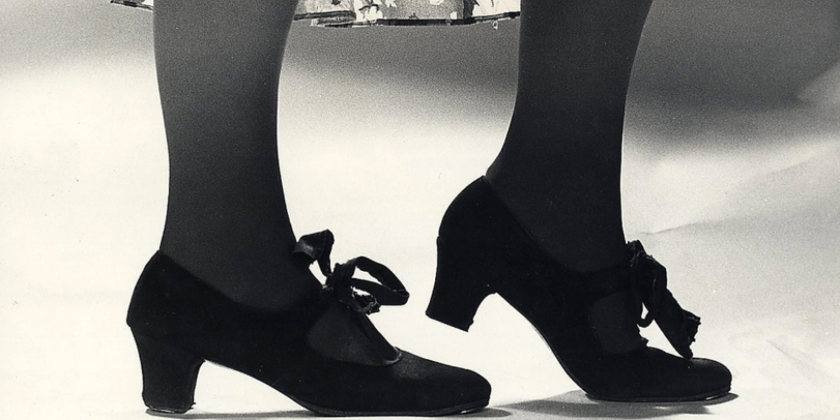 Steps Beyond presents "By Word of Foot: Tap Masters Pass on Their Tradition,"  a film by famed tapper Jane Goldberg, followed by a lively panel discussion on passing on the tradition of tap and how the creation of tap festivals helped in the codification and understanding that tap can be taught.

"By Word of Foot"  is a film that documented tap festivals organized by Jane Goldberg's Changing Times Tap.  Held in New York City venues in 1980, 1982 and 1985, these festivals paved the way for tap's continuity by bringing together tap masters and students.   A whole new generation of young tappers was able to study with some of the tap greats, thanks to the pioneering efforts of Changing Times Tap.   Many professional dancers met at these initial "By Word of Foot" gatherings, and tap festivals now blossom through the U.S. and Europe.   There are now maps on taps as young and old tappers travel to continue to move the art forward.   "By Word of Foot" was originally funded by the National Endowment for the Arts.

Jane Goldberg, dancer/writer/filmmaker, has been one of the most prolific voices in the tap dancing field for the past three decades.  In 1972, while a government major at Boston University, the dancing of Fred Astaire and Ginger Rogers infected her imagination, and the virus spread throughout her body.  She began to study tap and write about dance for several publications before moving to NY and apprenticing herself to many of the remaining entertainment greats of the 20th century, while also interviewing the old time great hoofers and documenting their work.   Today, her achive "Jane Goldberg's Wandering Shoes, Tap(hi)istory, Tip Top Tapes, Tapalogues, Tapology and Tapperabilia" lives at the New York Public Library's Lincoln Center for the Performing Arts, part of The Gregory Hines Tap Collection.

As a performer, Goldberg's comedy/tap act, "Rhythm & Schmooze," which examines politics, sexuality, tap roots, career vs. family, and other issue-oriented themes, has been performed in countless venues in this country and abroad.   She is the recipient of two Fulbright Scholarships to India where she performed throughout the country.   Jane is artistic director of Changing Times Tap, Inc., and has received numerous grants from the NEA and NYSCA.  Her Flo-Bert Life Achievement Award, Mama Lu Parks Award, and St. Denis Award for Creative Choreography, proudly hang on her home archive walls. A New York resident, the ever-imaginative Jane is the inventor of tap-a-gram, a tapping telegram service.


Steps Beyond is the performance and special events division of STEPS ON BROADWAY.
Steps Beyond embodies the philosophy that Steps on Broadway is a studio for professionals and for dancers training to be professionals.   Its mission is to connect dancers with the wider artistic community by providing opportunities to translate and interpret their daily dance training into performance, and to gain access to people working in the industry.  Performance opportunities include the Reverb Festival, Celebrate Dance/The Faculty in Performance, and various other dance and music concerts.  The Artists Talk Series and Film Nights @ Steps on Broadway offer discussions with dance, music, and theater industry experts.