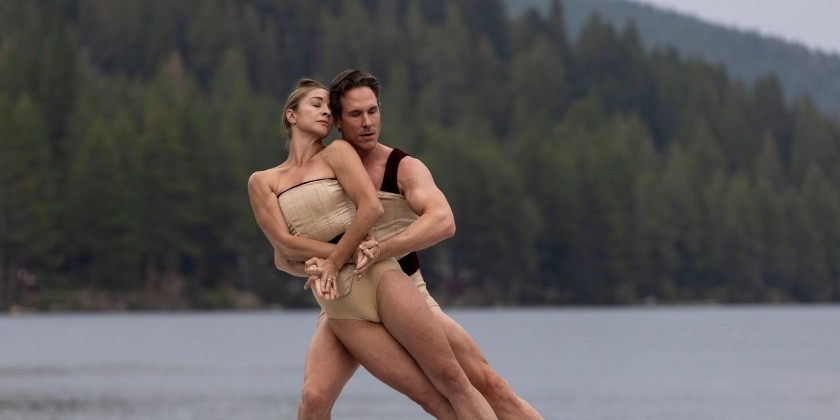 Lake Tahoe Dance Collective (LTDC) presents the tenth annual Lake Tahoe Dance Festival, which will take place this summer from July 27-29, 2022 at venues in Tahoe City and Truckee, CA for in-person audiences. Tickets start at $25 and are available online at laketahoedancecollective.org. The event will also be available via free livestream, available on the company's website Saturday July 30th through Tuesday, August 2nd.

The festival begins on Wednesday, July 27 at 5PM with the Tenth Anniversary Gala Opening Night Celebration, where audiences will enjoy a silent auction with food and wine, and a special presentation from the Washoe Tribe, performing the Ceremonial Round Dance prior to the evening's on-stage performance. The festival's Main Stage Performances continue on July 28 at 6PM in Tahoe City and on July 29 at 6PM on West End Beach, Truckee, CA.

LTDC celebrates its 10th year of presenting the Lake Tahoe Dance Festival. The festival has presented over 35 works with more than 35 guest artists and 75 local dancers since its beginnings in 2013. The Festival program comprises a variety of dance styles, pairing seminal works from the past with the newest work being created today.

"When we founded the festival, we felt strongly about programming performances in a way that would be universally accessible," explained Christin Hanna, who founded LTDC in 2008 and the Festival in 2013 with longtime friend and collaborator Constantine Baecher. "and by showing an evening where each work is dramatically different from the next helps to educate new audiences as well as provide a treat to dance fans."

Beloved by audiences for its genuine romantic expressivity and representation of ideal love, this pas de deux from act two is part of the first wholly original evening-length ballet Balanchine choreographed in America in 1962.

To Each in His Own Time choreographed by Lar Lubovitch

Longtime collaborators and festival allum Holly Curran and choreographer Constantine Baecher will be creating a new solo for Ms. Curran inspired by the music of Italian composer Teho Teardo.

LTDC will continue to monitor and adjust to the developments and changes in COVID safety policies. In accordance with CDC and California Department of Public Health Guidelines, the most recent updates to our COVID safety procedures are available at laketahoedancecollective.org/safety.

The Young Dancers Workshop, a three-week intensive from July 11-29, 2022 for dancers ages 10 and up, offers training with festival artists in small class sizes with an emphasis on classical ballet, modern technique and improvisation. Dancers learn a repertory work that is performed in the festival.

Constantine Baecher is a choreographer, dancer, and teacher living in New York, splitting his time between Europe and the US. He is the co-founder and artistic director of Denmark's Copenhagen International Choreography Competition (CICC) and Artistic Advisor to the Lake Tahoe Dance Festival.

Constantine is an active freelance choreographer having created works for companies such as the Royal Danish Ballet, Cross Connection, and KUNST-STOFF San Francisco among others, and spent 7 seasons as resident choreographer of New Chamber Ballet NYC. From 2003-2012 Constantine performed with the Royal Danish Ballet and Gross Dance, Amsterdam. Currently Constantine tours internationally with the Paris based Carolyn Carlson dance company.

Constantine has received grants from The Danish Arts Council and Wilhelm Hansen Foundation as well as the 2011 Albert Gaubier Award for contribution to dance in Denmark.

Kristina Berger is a principal dancer with the Erick Hawkins Dance Company and a creator of her own work. her professional career ranges from Ringling Bros. Barnum & Bailey Circus Dancer to First Femail and Westerner to perform the virtuoso solo "Hanuman the Monkey King" in Bali. She has also performed with Lester Horton Dance Theater, Molissa Fenley & Dancers, Joyce Trisler Danscompany, Washington Opera Ballet and the Ballery in Berlin.

Kristina continues to tour and perform professionally while dedicating the majority of her time to the Joan Palladina School of Dance at Dean College where she holds a full-time faculty position as Assistant Professor of Dance, teaching both Horton and Hawkins Techniques.

Ashley Bouder was born in Carlisle, Pennsylvania, and began her ballet training at the age of six at the Central Pennsylvania Youth Ballet with Marcia Dale Weary. After attending the 1999 Summer Program at the School of American Ballet (SAB), the official school of New York City Ballet, she was invited by SAB to continue her training during the Winter Session. Ms. Bouder was named an apprentice with New York City Ballet in June 2000 and became a member of the corps de ballet that October. She was promoted to the rank of soloist in February 2004, and in January 2005, Ms. Bouder was promoted to principal dancer.

Ms. Bouder has danced in ballet galas around the world and guest starred in companies including the Paris Opera Ballet, Rome Opera Ballet, and the Mariinsky Ballet. She has been awarde Mae L. Wien Award for Outstanding Promise at the School of American Ballet as a student. As a professional her awards include the Janice Levin Honoree from the New York City Ballet, the Miss Expressivity for 2011 and the Miss Virtuosity for 2013 from the Dance Open Gala, and a 2014 Benois de la Danse nomination.

Beginning her teacher training in her teens at the Central Pennsylvania Youth Ballet (CPYB), Ms. Bouder has taught at the summer programs of the School of American Ballet (SAB), Saratoga Summer Dance Intensive (SSDI), Manhattan Youth Ballet (MYB), Carolina Ballet School, and the CPYB. She continues to be a frequent guest teacher at Ballet Academy East, MYB, and SAB, while guest teaching and holding master classes around the country, including the Boston Ballet School and Princeton University.

As a choreographer, using the arts collaborative she founded, The Ashley Bouder Project as an outlet for her work, Ms. Bouder hopes to promote other female choreographers, while also setting an example for women to be more forward and prominent in the creation and directorial sides of the arts world. Her previous work has been presented at the School of American Ballet Choreographic Workshop, the New York City Ballet in the Dancer's Choice Program, the Ashley Bouder Project at New York's Peter Norton Symphony Space, and at Bryant Park Presents.

Joseph Gordon was born in Phoenix, Arizona, and began his dance training at the age of five at The Phoenix Dance Academy. Mr. Gordon began studying at the School of American Ballet (SAB), the official school of New York City Ballet, during the 2006 summer course and enrolled as a full-time student that fall. In August of 2011, Mr. Gordon became an apprentice with NYCB, and in July of 2012, he joined the Company as a member of the corps de ballet. In February 2017, Mr. Gordon was promoted to soloist and in October 2018, he was promoted to principal dancer.

Stephen Hanna was born in Pittsburgh, Pennsylvania. He entered the School of American Ballet (SAB), the official school of New York City Ballet, in the fall of 1992. Mr. Hanna became an apprentice with New York City Ballet in 1997, and later that year he joined the Company as a member of the corps de ballet. Mr. Hanna was promoted to the rank of soloist in February 2004, and in January 2005, he was promoted to principal dancer. In 2008, Stephen appeared in the original Broadway cast of Billy Elliott the musical, and since appeared in On The Town, An American in Paris, and most recently Hello, Dolly! on Broadway, as well as in The Piano Upstairs with Alessandra Ferri.

Lloyd Knight joined the Martha Graham Dance Company in 2005 and performs the major male roles of the Graham repertory including in Appalachian Spring, Embattled Garden, Night Journey and many others. Dance Magazine named him one of the "Top 25 Dancers to Watch" in 2010 and one of the best performers of 2015. Mr. Knight has starred with ballet greats Wendy Whelan and Misty Copeland in signature Graham duets and has had roles created for him by such renowned artists as Nacho Duato and Pam Tanowitz. He is currently a principal guest artist for The Royal Ballet of Flanders directed by Sidi Larbi Cherkaoui. Born in England and raised in Miami, he trained at Miami Conservatory of Ballet and New World School of the Arts.

About the Lake Tahoe Dance Collective

The Lake Tahoe Dance Collective's mission is to promote classical, modern and contemporary dance of the finest quality in the Lake Tahoe area through performance, education and outreach, enriching the community as a whole and as a cultural destination.

Christin Hanna trained with Margaret Banks at Nevada Festival Ballet and performed in the company's productions throughout her young life, continuing her studies at the Joffrey Ballet School and American Ballet Theater summer sessions in New York City. Ms. Hanna enjoyed a busy freelance career, performing with Oakland Ballet, Ballet NY, and Cincinnati Ballet, and was a founding member of New Chamber Ballet. During her time there, she initiated a performance and summer workshop with area students in her hometown of Tahoe City in 2006. Since her return to Tahoe in 2008, Hanna has produced over fifteen performances featuring over 50 works with more than 20 guest artists. She has staged works created on her at NCB as well as classics like Giselle, in addition to choreographing and serving as rehearsal assistant to visiting guest choreographers. She and longtime friend Constantine Baecher started the Lake Tahoe Dance Festival in 2013 and continue to collaborate on programming and artistic vision for Lake Tahoe Dance Collective.