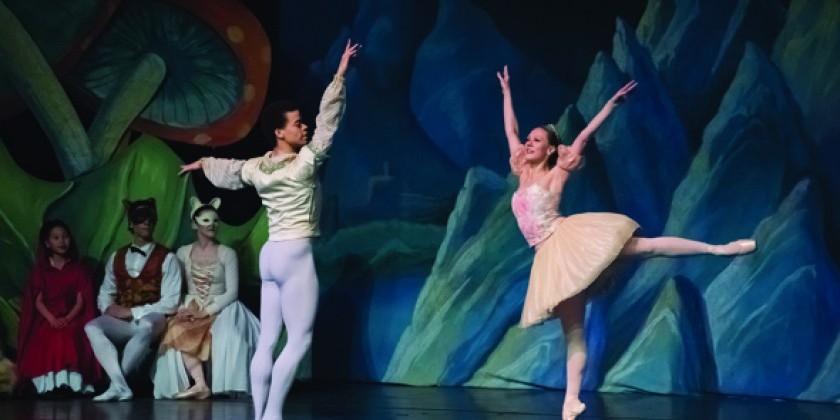 New York Theatre Ballet will return to Tarboro, North Carolina on March 22, 2018 at 7:30pm to perform in the Edgecombe Community College Performing Arts Series, bringing a program of mixed repertoire. NYTB has performed in the series annually for the past five years. Sponsored by the Furman Mathewson Trust of Edgecombe County Memorial Library, the performance is free, but reservations are required.

Works this year include:

Dirk Lumbard, a teacher at ECU and the veteran of seven Broadway shows, is a master-tap dancer, and has performed leading roles at Barton, Imperial Center, NCT, and Edna Boykin. He will perform in Two Timing, a piece performed to Steve Riech's Clapping Music, with NYTB dancer Elena Zahlmann. It features Dirk performing very elaborate clapping music with the ballerina tapping on pointe.

"In the score, a single twelve-count phrase of claps and pauses is methodically altered (the first note keeps becoming the last one). The two performers move close together, always in counterpoint, and eventually the sound-making includes smacks on the floor and other forms of body percussion. It's a virtuosic number, executed at a good clip..." - Deborah Jowitt, Dance Beat wrote of Two Timing

The Furman-Mathewson Trust of Edgecombe County Memorial Library is authorized "to provide a perpetual and continuing memorial to the Mathewsons" in the form of a continuing program of superior cultural, literary, educational or scientific presentations for the patrons of the Edgecombe County Memorial Library. The trust has previously helped to bring Maya Angelou, Nicholas Sparks, and B.B. King to Edgecombe County, and have sponsored free performances of Jasmine Guy and the Avery Sharpe Trio and the Regina Carter Quintet and for the past five years, the New York Theatre Ballet.

ABOUT NEW YORK THEATRE BALLET
With its ever-expanding repertory, New York Theatre Ballet's cutting-edge programming brings fresh insight to classic revivals paired with the modern sensibilities of both established and up-and-coming choreographers. Going strong after 38 years, New York Theatre Ballet's diversity in repertory explores the past while boldly taking risks on the future.

DIANA BYER, FOUNDER AND ARTISTIC DIRECTOR
Diana Byer is the founder and Artistic Director of New York Theatre Ballet and Ballet School NY. She is a répétiteur for The Antony Tudor Trust, a member of the Board of Directors of the Dance Notation Bureau, an Education Ambassador for The New York Pops, on the Dance Portal Advisory Board of The Children's Museum of Manhattan, and on the Selection Committees of The Bessies and Clive Barnes Awards. She has staged the ballets of Antony Tudor for American Ballet Theatre and The Hartt School and the ballets of Agnes de Mille for the Alabama Ballet and American Ballet Theatre. She coached the principals for the Columbia Pictures film, Center Stage.