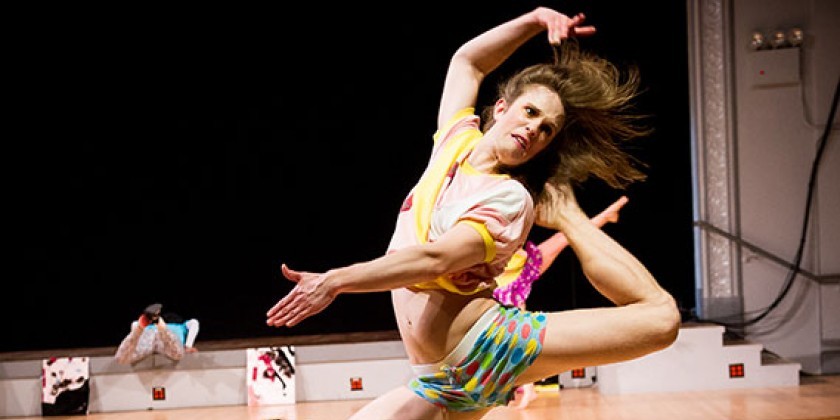 July 29, 2014 – Now in its ninth year, The Obie and Bessie Award-winning Chocolate Factory Theater has quickly established itself as a leading incubator for new developments in experimental performance, commissioning, presenting and supporting the development of work by local, national and international artists whose work defies easy categorization.

For its 2014/15 season, The Chocolate Factory will present fewer works (just nine public presentations) than it has in previous years. As a result, each artist will receive substantial increases in commissioning and performance fees (all lead artists and performers are paid a weekly salary on the books) and longer residency periods leading up to their official premieres.

The Chocolate Factory’s 2014/15 season maintains its commitment to emerging and mid-career New York City-based artists; continues its focus on international collaboration with a new commissioned work by Melbourne, Australia-based artist Luke George; initiates a large-scale multi-site residency collaborative, The Hatchery Project, with major support from the Andrew W. Mellon Foundation and the National Endowment for the Arts; and continues its long-running partnerships with Abrons Arts Center and Performance Space 122.

Unless otherwise noted, tickets to all performances are $15 and may purchased online at www.chocolatefactorytheater.org or by calling 212-352-3101.

Marissa Perel - More Than Just A Piece of Sky
September 17-20, 2014 Wednesday thru Saturday at 8pm
Presented as part of the Queer New York International Arts Festival.

More Than Just a Piece of Sky is a performance that mines personal and cultural exile as a site for the exploration of gender and sexuality, knowledge and power, and ability and disability. Through the mythology of Yentl, largely based on Barbra Streisand's 1983 movie musical and the story by Isaac Bashevis Singer, Perel and the performers examine their relationships to oppressive cultural constructs and their inherited religious and nationalist narratives. Perel deconstructs the narrative of Yentl to tell a new story, one where difference can create new terms and ways of seeing self and other.

Michal Samama - Background Materials
October 1-4, 2014 Wednesday thru Saturday at 8pm
‘To be a body is to be tied to a world'- Merleau-Ponty.

Background Materials is a performance event exploring the temporal and spatial aspects of bodily experience. Its focus, paradoxically, is what could be labeled as ‘background experience’: the ‘background noise’ of our daily existence, the sensual data that ties us to the world precisely by not coming under focus. Thus, the performance, though a visual event, highlights elements of ‘background noise’, such as the artists’ breathing, and the tactility of the materials with which she interacts.

Borrowing from the dynamics of a visit to an exhibition space, Background Materials brings together two separate performance pieces: Walling and Lament of Plastic. In both pieces, the performer interacts with materials that have a strong, yet elusive, presence in our cultural life. In Walling, the material is the concrete wall, the mute surroundings of the space. In Lament of Plastic it is a plastic trash bag, the transparent carrier of our waste and refuse. The uncanny presence of these materials consists precisely in their forming part of our background, rarely being objects of direct, intentional perception and reflection. Can we experience their ‘background’ quality while directing our gaze towards them? Created and Performed by Michal Samama. Lighting Design by Madeline Best.

Star Crap Method is Larissa Velez-Jackson’s compositional methodology that complicates and redefines the skill set of the contemporary dancer. A trio (comprised of Tyler Ashley, Talya Epstein and Larissa Velez-Jackson) collectively composes the entire work in the moment, including the sound score of live vocals and digital sound. The piece is founded on Velez-Jackson's improvisational practice that embraces technical brilliance and failure in equal measure, ushering in a form of creative limitlessness with opportunities for great humor, vulnerability and absurdity — core values in her work.

An experiment in anonymous intimacy and fake belief, Not About Face questions the nature of the unseen and unspoken agreements/traditions between performer and audience, accessing the supernatural and spiritual as a way to explore what it means to perceive, know and believe. For this performance, audience members are robed in full-body shrouds and join a free-roaming and anonymous gathering in the performance space. We will come together. We will become anonymous. We will fake belief or believe in faking it.

Luke George's practice is occupied with the interplay between the embodied and conceptual. His work explores energy and presence in relation to how we perceive ourselves, each other and the world around us.

Andrea Kleine - Screening Room, or, The Return of Andrea Kleine (as revealed through a re-enactment of a 1977 television program about a 'long and baffling' film by Yvonne Rainer.)
December 3-6, 2014 Wednesday thru Saturday at 8pm

Andrea Kleine, an "enigmatic and eccentric" (The New York Times), "brainy, allusive Downtown artist" (Village Voice), whose work is "something like genius" (ArtVoice), has been absent from the stage for a decade. She resurfaces as the choreographer/filmmaker Yvonne Rainer and Rainer's lion-tamer-turned-dancer character "Kristina," transforming a verbatim talk show interview into an imaginary film recounting Kleine's journey of disappearance. Created by Andrea Kleine. Live music by Bobby Previte.

Molly Lieber and Eleanor Smith have been collaborating in New York since 2006. Their work is recognized for the tension of a powerful but submerged inner world, cultivated through brave continuous study of duet improvisation. Together they embody highly imaginative performativity within a sparse physical environment. Rude World completes Lieber/Smith's current triptych of works about fear, shame, and trust, including Tulip (2013) and Beautiful Bone (presented by The Chocolate Factory in 2012). A highly improvised work, the piece scans the duo’s history of intimacy together. Choreography and Performance by Molly Lieber and Eleanor Smith. Lighting Design by Madeline Best.

Aaron Landsman with Mallory Catlett - Running Away From The One With The Knife
March 13 - 28, 2015 Wednesday thru Saturday at 8pm

Running Away From The One With The Knife is a play about suicide and religious faith. It's a memorial and an exorcism for a woman named Christina; it's the story of her sister, and the monk who is their friend. And none of them are particularly reliable. It's a stark, slapstick death, in a dreamed kitchen, between half-heard pasts and the present retelling. The play is terse, allusive, full of monologues, repeated short scenes and hastily-scrawled signs that comment on what's happening. How are you? Okay. Yeah? I think so. I think so!

"I started working on this script in 2002, after a close childhood friend died, and I had an encounter with a monk from a small order called The Little Brothers Of Jesus. I’ve written, re-written and workshopped the piece several times, and mostly what I came up with wasn't very good. It's taken this long to get it to where I'd like people to see it, because the subjects are personal and fraught. I'm glad we waited.”

David Neumann / Advanced Beginner Group - I Understand Everything Better
co-commissioned and presented with Abrons Arts Center, at the Playhouse
April 9-18, 2015

I Understand Everything Better, a multidisciplinary dance-based performance by Bessie-Award winning choreographer/performer David Neumann, explores our impulse to report on calamity; the shimmer of attention to realms unseen; the concurrence of unrelated events and the body as evidence of a will having to let go. Neumann's "deeply felt and deeply moving" work (NY Times) manifests as a 'solo with other performers’, marking Neumann's return to performing in his own work after an absence of several years. The other members of the collaborative team include: Sibyl Kempson (text), Tei Blow (sound), Chloe Z. Brown and Christine Shallenberg (lighting), Andrew Dinwiddie and Jesse Heffler (performers), and Mimi Lien (set).

Rebecca Patek - the future was looking better in the past: my family herstory: or from religious persecution to american greed to murderous infamy to denial, repression and the slow dissolution into moral confusion, financial ruin and karmic retribution
co-commissioned and presented with Abrons Arts Center
May 20-23, 2015 Wednesday thru Saturday at 8pm

Rebecca Patek’s new performance invokes the story of Leopold and Loeb to hold a mirror to her own “crimes” and investigate a personal history involving familial guilt, tainted blood, and bad karma. Created and performed by Rebecca Patek in collaboration with Sam Roeck. Music by Louise Dierker.

A performance development series curated and moderated by Sarah Maxfield. All events take place at 7pm and are free and open to the public.