The Bang Group presents the 19th Annual Production of "Nut/Cracked" 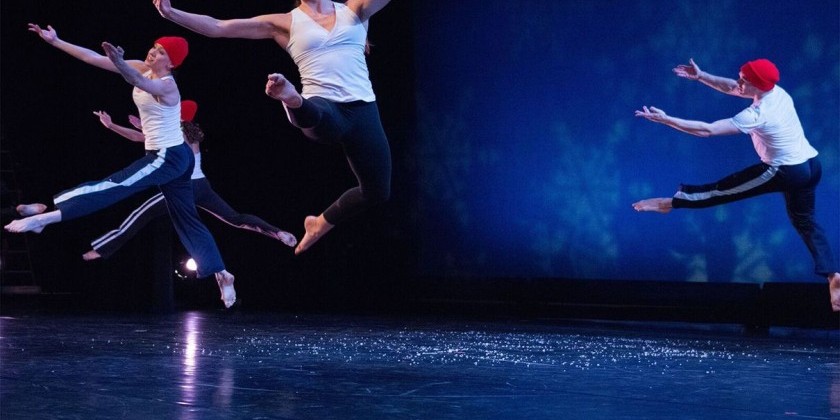 The Bang Group presents the nineteenth annual production of Nut/Cracked on Thursday, December 16 at 7:30pm, Friday, December 17 at 7:30pm, and Saturday, December 18 at 3pm and 7:30pm, at the Flea Theater, 20 Thomas Street, NYC. Tickets are $15 for students, seniors, and artists, $16 for groups of 10 or more, and $25 general admission, and can be purchased online.

Delighting audiences for nearly two decades, Nut/Cracked is The Bang Group's beloved, witty response to The Nutcracker, conceived as a fluid dance world where genres collide and jostle each other with a genial clamor in celebration of the winter holidays. Choreographer David Parker liberates The Nutcracker from its plot and tradition and seeks for it a new identity as a free-wheeling, genre-fluid vaudeville which breaks apart elements of the holiday season: surprise, anticipation, greed, community, generosity, and delight in a series of dances drawing inspiration from all corners of the dance canon—tap riffs and en pointe ballet by way of bubble wrap, disco, and Chinese take-out noodles, with modern and post-modern dance, disco, social forms and pure invention.

"Not only immensely entertaining but also intensely musical and witty, melding tap, disco, ballet and contemporary dance....Combines fantasy and silliness to marvelous effect."

"You never know what'll happen next, but when it's over you find...a passionate declaration of naivete in the best sense: innocence regained."

Music by P.I. Tchaikovsky with arrangements by Duke Ellington, Glenn Miller, Fred Waring & the Pennsylvanians, Raymond Scott Quintet, Westminster Bell Choir, The London Symphony Orchestra, The Orchestra of the Royal Opera House at Covent Garden. Produced by The Bang Group, choreographed by David Parker, rehearsal direction by Erin Gottwald, and lighting design by Jay Ryan. All audience members will be required to show proof of vaccination before entry. Accepted forms are Excelsior pass or valid vaccine card. Audience members must also wear a mask that covers their nose and mouth at all times within the performance area. Nut/Cracked is co-commissioned by Dance Theater Workshop in New York City and The Carlo Felice Opera House in Genoa, Italy. This is Nut/Cracked's 19th consecutive season, and it has toured throughout the United States and to various destinations in Europe.

About The Bang Group

The Bang Group is a rhythm-driven, New York-based dance company which spans contemporary and percussive forms. The company, founded and directed by Jeffrey Kazin and David Parker celebrates its 24th anniversary this season. TBG has toured and performed widely throughout North America and Europe appearing at The Holland Dance Festival, Konfrontace in Prague, Tanzsprache in Vienna, Dance Week in Zagreb, Monte Carlo Dance Festival, Edinburgh Fringe Festival (2006, 2009 and 2014,) Biennale Charleroi in Belgium, Tanzemesse in Essen, Germany (2000 and 2016,) Fondation Cartier in Paris, OT 301 in Amsterdam, Divadelna Nitra in Slovakia, Belluard Bollwerk in Switzerland and numerous cities in Italy. The company has been generously supported by The Jerome Robbins Foundation, New York City Department of Cultural Affairs, Doris Duke Foundation, New York Foundation for the Arts, Harkness Foundation, Tiger Baron Foundation, Mid Atlantic Arts Fund, Greenwall Foundation, Arts International, Fund for Mutual Understanding, Netherland- America Foundation, Pentacle's ARC Fund, Frederick Loewe Foundation and several private donors. It is presented regularly in New York City by New York Live Arts and its predecessor Dance Theater Workshop, Danspace Project, Dance Now NYC, Symphony Space, The Harkness Dance Festival and the 92nd Street Y, among many others. The Bang Group has made its second home in Boston through sustained partnerships with Summer Stages Dance (13 seasons), The ICA, and The Dance Complex. The company is also in residence annually at The Yard on Martha's Vineyard and at The West End Theater on Manhattan's upper west side and has recently become an Anchor Partner at the new Flea Theater in Manhattan. It supports and presents the work of a wide range of artists through its thrice-yearly series called Soaking WET at the West End Theater and its Dance Now Boston initiative which commissions new work created for cabaret spaces and enters its fifth annual season in June 2018. Next month, TBG will reprise its much-praised program of dances by Parker, James Waring and Aileen Passloff reflecting on Parker's artistic forebears at the 92nd Street Y, and is creating a new music/dance work composed by Pauline Kim Harris to premiere at The Stone in NYC in July. For more information, visit www.thebanggroup.com.