"The Colonial Nutcracker" at Brooklyn Center for the Performing Arts 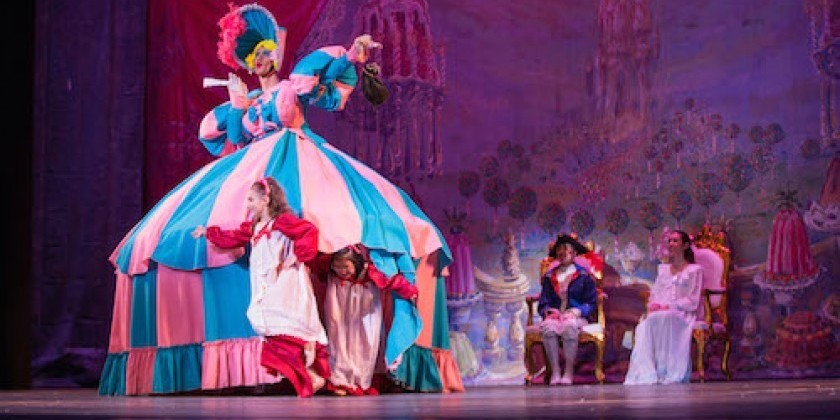 Brooklyn Center for the Performing Arts at Brooklyn College continues its 60th Anniversary Season with its annual holiday performance of Dance Theatre in Westchester’s The Colonial Nutcracker on Sunday, December 14, 2014 at 2pm. Tickets are $15 each, and can be purchased at BrooklynCenter.org or by calling the box office at 718-951-4500 (Tues-Sat, 1pm-6pm).

Created especially for families with children ages five to ten, The Colonial Nutcracker sets Tchaikovsky’s classic ballet in wintry colonial Yorktown during the Revolutionary War. The production features classics such as “Dance of the Sugar Plum Fairy” and “Waltz of the Snowflakes,” a red-coated mouse army, an enchanted nutcracker prince, and compelling narration that will enhance young viewers’ understanding and enjoyment of this timeless story. Rose Menes’ delightful staging and choreography, coupled with colorful costumes and Tchaikovsky’s enduring score, will captivate audiences of all ages. The running time is approximately 2 hours plus an intermission.

In addition to The Colonial Nutcracker, Brooklyn Center’s 2014-15 family performances include the Target Storybook Series of performances based on classic and contemporary children’s literature, with titles including The Adventures of Harold and the Purple Crayon (Sunday, March 29, 2015 at 2pm); The Very Hungry Caterpillar and Other Eric Carle Favourites (Sunday, April 19, 2015 at 2pm); Jim Henson’s Dinosaur Train Live: Buddy’s Big Adventure (Sunday, April 26, 2015 at 12pm and 3pm); and The Musical Adventures of Flat Stanley (Sunday, May 17, 2015 at 2pm). This series aims to encourage the development of strong reading skills at home in children ages four to eight. Online resources, such as literacy-based activity sheets and Parents’ Guides, will give parents the opportunity to engage their children prior to attending the performances, and then again after seeing each show.

Other family-friendly shows at Brooklyn Center this season include a Lunar New Year Celebration by Nai-Ni Chen Dance Company (Sunday, January 25, 2015 at 3pm), The Golden Dragon Acrobats (Saturday, March 14, 2015 at 2pm), and two free family events, The Beauty of Ballet in partnership with the School of American Ballet (Saturday, March 7, 2015 at 2pm) and the Eighth Annual National Grid Earth Day Celebration (Sunday, April 19, 2015 at 3pm). Family programming ticket prices range from free to $25, with a 50% discount available to children 12 and under for select performances.

About Dance Theatre in Westchester

Dance Theatre in Westchester is a professional company founded in 1979 by Artistic Director Rose Menes.  With a repertoire that includes The Colonial Nutcracker, Sleeping Beauty, Peter and the Wolf, and Cinderella, the company engages both professional dancers from around the world as well as talented students from throughout the tri-state area for its ballets. In addition to creating all of the staging and choreography for her company, Ms. Menes has also choreographed several operas including The Merry Widow, Faust, and Orfeo ed Eurydice at theaters ranging from the Williams Center for the Performing Arts in New Jersey to the Anchorage Opera in Alaska.

Founded in 1954, Brooklyn Center for the Performing Arts at Brooklyn College presents outstanding performing arts and arts education programs, reflective of Brooklyn’s diverse communities, at affordable prices. Each season, Brooklyn Center welcomes over 65,000 people to the 2,400 seat Walt Whitman Theatre, including up to 45,000 schoolchildren from over 300 schools who attend their SchoolTime series, one of the largest arts-in-education programs in the borough. In recognition of its commitment to quality family programming, Brooklyn Center for the Performing Arts has been recognized as both Brooklyn’s Best Theater or Theater Group for Kids and Brooklyn’s Best Place for Family Bonding by ParentsConnect Parents’ Picks Awards. In 2014-15, Brooklyn Center celebrates its 60th Anniversary Season of presenting world-class performances on the Brooklyn College campus.