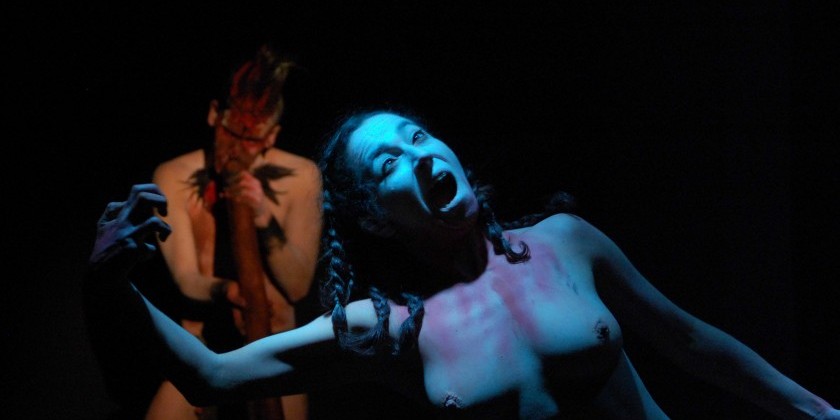 Tickets are $15 and are available at https://www.brownpapertickets.com/event/3508983. For more information about the festival or to enroll in the workshop and masterclass, visit http://www.vangeline.com/calendar-of-upcoming-events/.

Over the past 60 years, Butoh has become a universal and international movement language. Developed in post World War II Japan, the minimalist avant-garde dance form has grown, evolved, and traveled worldwide.

New York Butoh Institute celebrates the way the art form has grown and shifted in the 21st Century, ensuring the style is reflective and responsive.

Friday, October 19 at 8pm: Sindy Butz in Vanished Country-Your own breath
Featuring: Nicole Watson (U.K.), Keren Shavit (Israel), Mariko Endo (Japan), Alana Rosa (Brazil); Azumi Oe (Japan), and Sindy Butz (Germany).
1 hour and 50 minutes with an intermission
Vanished Country-Your own breath is inspired by the melancholic poem "Am Fenster" (By The Window) by the German writer Hildegard Maria Rauchfuß. The text became a classic through the former East German cult rock band City in 1977. On stage, a video projection represents the emotional state of being trapped in an ideology, gazing through a foggy window onto the other side, into a better reality and freedom. The dancer on stage juxtaposes the feeling of physical and mental narrowness through oppression (video) with nuances of liberation, solidarity, and intoxication of joy. A sculptural element of a window/ portal connects both worlds.

Saturday, October 20 at 8pm: Nicole Vivien Watson - Surface Area Dance Theater - U. K. in The Mud Formed A Finger, Pointed
Featuring: Nicole Watson (U.K.); Natalia Cuellar and Raimundo Estay (Chile)
1 hour and 30 minutes with an intermission
The Mud Formed A Finger, Pointed explores creation myth and Messy Play, made in collaboration between Matthew De Kersaint Graudeau (Sound) and Ben Jeans Houghton (Sculpture). The Mud Formed A Finger, Pointed offers a study of the human body as an uncanny object that oscillates between figuration and abstraction, body and material, depicting an object becoming human, a human becoming an object and the protean states between. Nicole Vivien Watson emerges from an industrial bucket, her body covered in dripping, viscous liquid. The work embodies a contemporary creation myth that melds object and subject, abject and sacred, non-human and human. By invoking the narrative imagery of creation myths where humans are formed from the earth, within the aesthetic of the fetish Messy Play and through the language of Butoh, the performance links our understandings of the contemporary body and our imaginings of a primordial past.

Sunday, October 21 at 3pm: Natalia Cuellar and Raimundo Estay in XIBALBA
"A spine chilling ancient ritual" July27th,2012 -LeopoldoPulgarIbarra
Xibalba invites audiences to come closer to the comple world of the Mayan mythology, in a performance created by Natalia Cuellar, butoh performer and director of the Rutadela Memoria company ("Cuerpoquebrado"), who specializes on plays based on the concepts of Gender, Memory and Human Rights.
Featuring: Nicole Watson (U.K.); Natalia Cuellar and Raimundo Estay (Chile)
1 hour and 30 minutes with an intermission