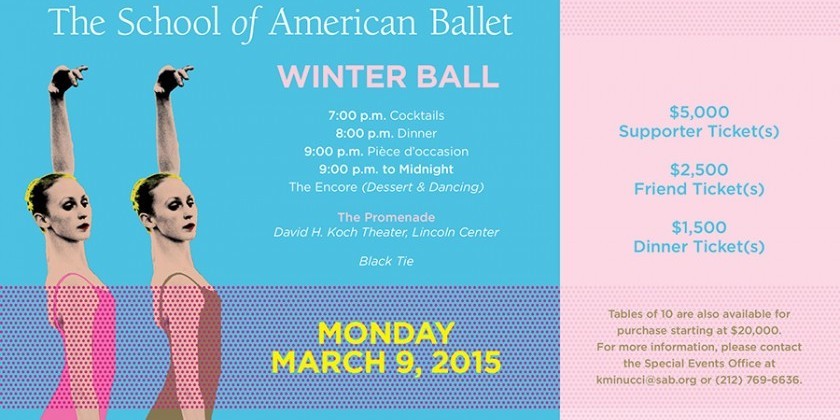 WHAT: The School of American Ballet's 2015 Winter Ball

*ADVANCE RSVP IS REQUIRED FOR PERMISSION TO SHOOT. Photographers and crews must show press credentials. 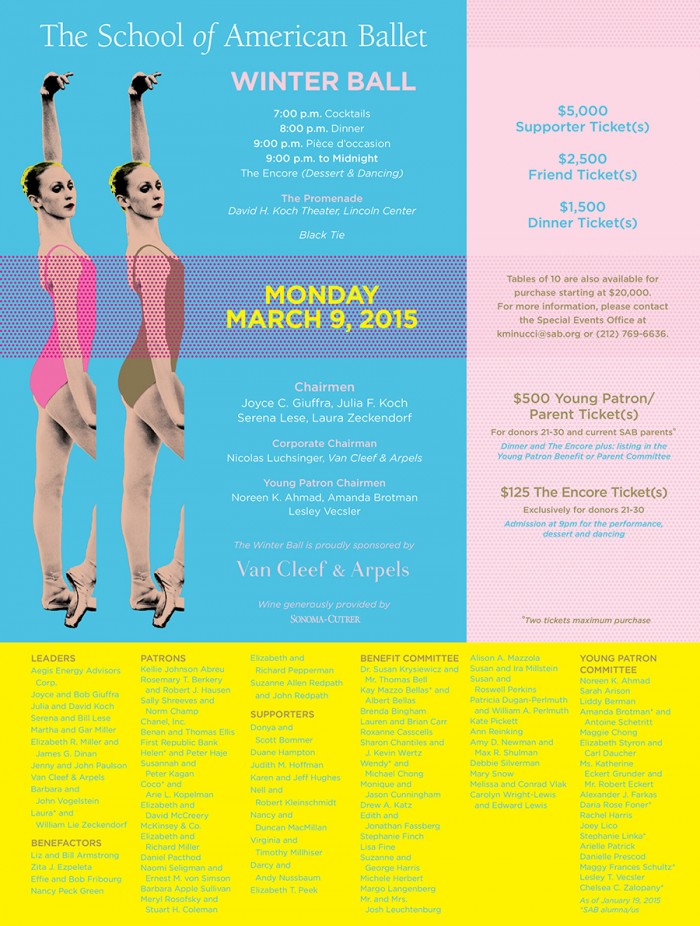 An annual event, the Winter Ball is a glamorous, black-tie dinner dance attended by more than 500 patrons, including the School's board members and alumni as well as leaders from the New York corporate and social communities.

A highlight of the evening is a performance by the intermediate and advanced students of The School of American Ballet created specifically for the event.  This year, New York City Ballet dancer Peter Walker was selected as choreographer by Peter Martins, Artistic Director and Chairman of Faculty for SAB.

The proceeds from the eventenhance every aspect of the School's extraordinary ballet training program, helping to provide more than $1.9 million annually in student scholarships, as well as supporting faculty, maintaining world-class studios and offering vital student programs beyond the classroom.

This year's Winter Ball will celebrate SAB co-founder George Balanchine's affinity for the unique spirit and energy of America. Ron Wendt will take inspiration from the influences of the Pop Art era and 70's revival using color and whimsy to create a fun and festive atmosphere on the David H. Koch Theater's promenade level.

Famed French jeweler, Van Cleef & Arpels, will again act as the lead corporate sponsor for the gala.  This long-standing partnership is a tribute to the friendship shared between SAB founder, George Balanchine, and one of the Van Cleef & Arpels founding brothers, Claude Arpels, who established the Maison in New York in 1939.  Their shared passion for exceptional stones inspired a creative partnership that resulted in Balanchine's Jewels ballet and its sumptuous costumes.

SAB, located at New York City's Lincoln Center, is the premier ballet academy in the United States, training more students who go on to become professional dancers than any other school. SAB's former students fill the ranks of the New York City Ballet and other leading U.S. and international ballet companies.

Van Cleef & Arpels was born in Paris' Place Vendôme in 1906, following Alfred Van Cleef's marriage to Estelle Arpels in 1895.Always striving for excellence, the Maison has become a worldwide reference through its unique designs, its choice of exceptional stones and its virtuoso craftsmanship, offering jewels and timepieces that tell stories and bring enchantment to life.Over the years, the Maison has remained faithful to this highly distinctive style characterized by creativity, refinement and poetry. Whether inspired by nature, couture or the imagination, its collections evoke a timeless world of harmony and beauty.

Peter Walker hails from Fort Myers, Florida, where he began his early dance training at age eight. He attended the School of American Ballet during the 2006 and 2007 summer courses and enrolled as a full-time student in the winter of 2007.  Peter honed his choreographic skills by participating in SAB's annual Student Choreography Workshop; and in 2011, 2012 and 2014, he was selected by Peter Martins to choreograph the Summer Session of the New York Choreographic Institute. He was a recipient of SAB's 2011 Mae L. Wien Award for Outstanding Promise and became an apprentice with New York City Ballet. He joined the Company as a member of the corps de ballet in fall 2012.