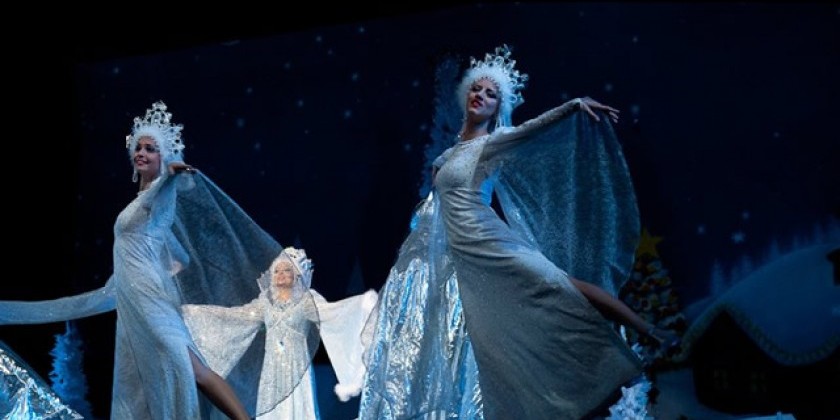 Brooklyn Center for the Performing Arts at Brooklyn College and Anton Krilloff present a Russian holiday fairy tale, The Snow Maiden, on Sunday, December 21, 2014 at 4pm. The Snow Maiden is performed in Russian with English subtitles. Ticket prices range from $35 to $65 and can be purchased at BrooklynCenter.org or by calling the box office at 718-951-4500 (Tues-Sat, 1pm-6pm). The running time is 1 hour and 10 minutes with no intermission.

In this magical Russian Christmas version of the Cinderella story, Grandfather Frost (the Russian Santa Claus) transforms a poor young girl into the beautiful Snow Maiden after proving her worthiness. This delightful children's extravaganza incorporates traditional Russian songs, dances and elaborate costumes to create a winter wonderland. At the end of the performance, every child in the audience will receive a Christmas candy gift box.

The festivities begin with a musical interlude of Russian folk music played by the ensemble Barynya, followed by entertainment and riddles by skomorokhi, traditional Russian clowns who historically traveled from town to town, performing in the streets and at fairs, singing comedic songs and acting out satirical sketches. As the pre-show comes to a close, Grandfather Frost (the Russian Santa Claus) is introduced, who acts as a type of narrator for the musical fairy tale to follow.

The Snow Maiden premiered in 2008 in Moscow. The creative team on this show includes an honored Russian writer and director Boris Boreyko (The Bremen Town Musicians), director and choreographer Andrey Ivanov, and costume designer Tatyana Kudryavtseva. All costumes were created by the Mariinsky Theatre tailors. www.thesnowmaiden.com.

Founded in 1954, Brooklyn Center for the Performing Arts at Brooklyn College presents outstanding performing arts and arts education programs, reflective of Brooklyn’s diverse communities, at affordable prices. Each season, Brooklyn Center welcomes over 65,000 people to the 2,400 seat Walt Whitman Theatre, including up to 45,000 schoolchildren from over 300 schools who attend their SchoolTime series, one of the largest arts-in-education programs in the borough. In recognition of its commitment to quality family programming, Brooklyn Center for the Performing Arts has been recognized as both Brooklyn’s Best Theater or Theater Group for Kids and Brooklyn’s Best Place for Family Bonding by ParentsConnect Parents’ Picks Awards. In 2014-15, Brooklyn Center celebrates its 60th Anniversary Season of presenting world-class performances on the Brooklyn College campus.