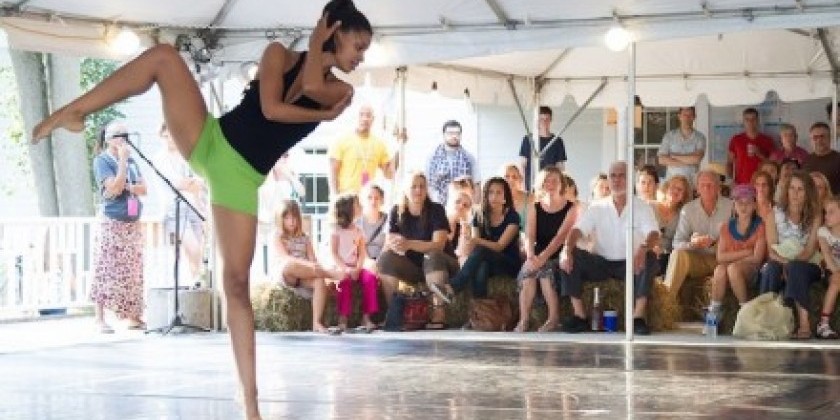 The mission of Earl Mosley’s Institute of the Arts (EMIA), a subsidiary of the not-for-profit Diversity of Dance, Inc., is to provide an environment where student artists from diverse ethnic, cultural and socioeconomic backgrounds can achieve the highest levels of excellence in dance through positive collaborations with teachers and peers.

Barbara Mahler  is a choreographer, performer, movement educator, body worker; a master teacher of and major contributor to Klein Technique™, faculty and certified practitioner of Zero Balancing. She holds an MFA from the University of Wisconsin, Milwaukee – 2007.   She has been  selected for the 2013 BAX 10 AWARD in Arts Education.

Originally from Jacksonville, FL, Maria Bauman founded MBDance in 2007, creating from a desire for equity and a fascination with relationship. For that work, she has been honored by GO! Magazine as a “Woman at the Helm.”  In New York, Bauman’s work has been showcased at Harlem Stage, 92nd Street Y Harkness Dance Center, Dixon Place, the Kumble Theater, SummerStage NYC, the Bronx Academy of Arts and Dance (BAAD!), WOW Café Theater, BRICstudios, and DTW (now NY Live Arts). MBDance just returned from performing in St. Louis.  Bauman has danced with Urban Bush Women, Nia Love/Blacksmith’s Daughter, Adele Myers and Dancers, Angela’s Pulse, Mendi + Keith Obadike, and jill sigman/thinkdance, and apprenticed with Bill T. Jones/Arnie Zane Dance Company. She was with Urban Bush Women for eight seasons, originating several roles, and recently serving as Associate Artistic Director of that company. Among other honors, she has received a 2014 CUNY Dance Initiative Residency Award, 2012-13 and 2009-10 Harlem Stage Fund for New Work via The Jerome Foundation, and a 2010-11 Dance Theater Workshop Studio Series. Bauman works closely with the People’s Institute for Survival and Beyond on Understanding and Undoing Racism workshops for arts communities and is a WOW Café Theatre collective member (theater space by and for women and transgender artists).

Kiran Rajagopalan is one of the leading young exponents of Bharatanatyam (South Indian classical dance). A graded artiste of Doordarshan Chennai, Kiran has given many acclaimed solo performances at prestigious venues in India, Indonesia, and the United States.  He is the recipient of a fiscal sponsorship from the prestigious New York Foundation for the Arts to choreograph and present a solo performance art production.

Ranardo-Domeico Grays (SAG/AFTRA, AEA), founder/artistic director of VISIONS Contemporary Ballet, is an alumnus of The Juilliard School and Cal Arts (BFA), the Alvin Ailey School and a graduate of Interlochen Arts Academy. He has performed with Sensedance, Rebecca Kelly Ballet, Urban Wash, La Toya Jackson, Garth Fagan, Zack Morris, Celebrity Cruises, acted in film and television and choreographed for TV and Off Broadway. He has taught Master Class workshops at Marygrove College and was Dance Director of Morris High School. VISIONS has been presented by Thelma Hill Performing Arts Center in Souls of Our Feet and PEEKS, Under Exposed at Dixon Place, American Cancer Society, Fertile Ground at Green Space, Bronx Academy of Arts & Dance in Boogie Down Bronx, Out Like That and BlakTino Performance Series, L.I.C. Arts Open Festival, The Field/LMCC/Harlem Arts Alliance’s Uptown/Downtown WIP, The Field/Abrons Arts Center, and NYSC at Aaron Davis Hall.

Eva Dean founded Eva Dean Dance (EDD) in 1985.  Throughout the years her extensive body of work has received critical acclaim and accolades from audiences, presenters and students. Known for its innovation and vibrancy, EDD thrives in unusual settings and working with varied props. Dean works closely with guest artists such as musicians, puppet masters, lighting, set, and costume designers to weave a visually rich tapestry.  Dean is a graduate of Hampshire College and still thrives on the experimental approach that was instilled in her during her formative years. Dean has also taught numerous master and guest artist workshops for students of all ages in public schools, colleges, and internationally.  As a dance advocate, Dean has moderated and served on numerous dance panels and forums in New York City.

Daniel Gwirtzman celebrates nineteen years as a New York choreographer, company director, educator and acclaimed dancer. His diverse repertory is known for a range of emotional moods and a stylistic versatility. Among the repertory is the show Encore which premiered in 2007 at Joyce SoHo and was an official selection of the New York Musical Theater Festival in 2009. Daniel Gwirtzman Dance Company, a performing and teaching nonprofit, was formed in 1998. Daniel thrives on collaborations with organizations throughout and outside of NYC. Recent highlights include debut performances at Jacob’s Pillow and the Edinburgh Fringe Festival. In 2013, Daniel received fellowships from the Djerassi Resident Artists Program and from the Sacatar Foundation, in Bahia, Brazil. His film No Trespassing screened at ADF’s International Screendance Festival, 2013. Daniel has danced with Garth Fagan Dance and the Mark Morris Dance Group among other companies. In 2014 DGDC celebrates its fifteenth anniversary season.

The Wassaic Project Summer Festival is a FREE, annual, multi-disciplinary celebration of art, music, dance, and community featuring over 100 artists, 25 bands, film screenings, dance performances, and much more! Housed in the unique buildings and property of the Wassaic Project, the festival escapes the white walls of traditional art spaces and focuses on site-sensitive installations and performances. The festival creates a weekend-long opportunity for artists and performers of all mediums to come together, exchange ideas, learn new things, and engage in a thriving community. Participants are encouraged to come for the day or stay the weekend, camping onsite. Programming is cutting-edge yet family friendly. The beautiful Hamlet of Wassaic is remarkably accessible from NYC and a short walk from the Wassaic MetroNorth train station. Funding for the festival comes from art sales, micro-spending, sponsorship, and donations.

The Wassaic Project Summer Festival is accessible by train and by car. More info and directions.
We are located at:
The Maxon Mills 37 Furnace Bank Road
Wassaic, NY 12592

Contribute to the Festival in a totally different way by becoming a Festival Volunteer!

Each volunteer shift will be 4 hours. Shifts can be done in one day or over the whole weekend. Volunteer benefits, awarded according to number of shifts, include: drink tickets, free camping, and a Seeing the Sky t-shirt!
Interested?  Email summerfest@wassaicproject.org

Local Residents: Rent your house on Airbnb.com for the Festival Weekend!

Do you live near the Wassaic hamlet and have some extra space in your home?  Make some extra cash and get to know our extended Wassaic Project community by listing it on Airbnb.com for the Festival.  More information here.