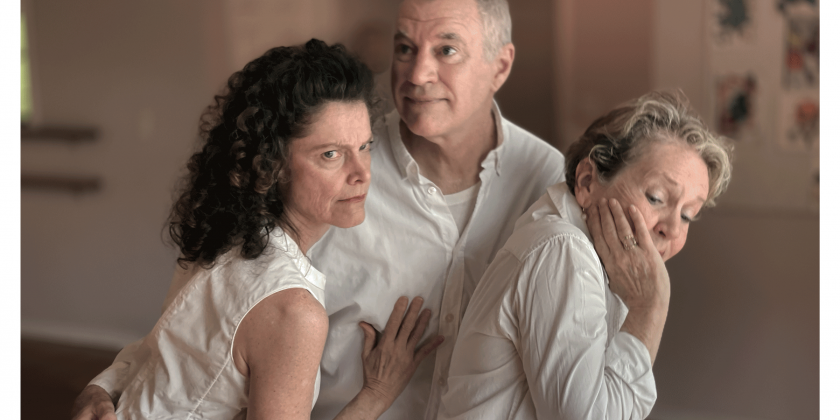 Youth is everything in the dance world—or is it? Three accomplished dance artists in their sixties beg to differ. In Then until Now, Vicki Angel, Eric Barsness and Carol Clements revisit comic, serious, and serio-comic solos they choreographed in their misbegotten youth and present new works that show that the creative springs remain fresh forty years on.

The 1980s downtown Manhattan dance scene was a hotbed of avant-garde, postmodern dance and performance art experimentation. The works of Angel, Barsness and Clements were produced by leading venues of the day: Dance Theater Workshop, The Kitchen, Danspace, LaMama, PS122 and grittier hotspots such as 8BC and a host of downtown loft spaces. Then until Now juxtaposes their old and new work, the physicality and creativity of the past alongside the present—and features the performance of both, in the now. Out with the new and in with the old!

Then until Now is the first presentation in Gibney’s POP: Performance Opportunity Project since early 2020.

Donna Perlmutter, writing in Dance Magazine, declared Vicki Angel “among the brightest, most imaginative choreographers” and, writing in the Los Angeles Times, found Angel’s work “first rate” and “uniquely personal.” Angel compares her choreographic invention to a road map highlighting points of interest—movement is tracked, developed and revisited. Lewis Segal of the Los Angeles Times says this “out-of-balance body regaining equilibrium” gives “this quasi-dramatic action maximum impact.” In The Hesitation, her premiere for Then until Now, Angel steps beyond her quirky, movement-based idiom to layer in a playful text.

Writing of Eric Barsness’ work in The New York Times, Jennifer Dunning observed, “No topic is sacred with Mr. Barsness, though he handles his themes with an intelligence, affection and deadpan innocence that make him good company.” In his solo works, Barsness’ lanky frame sails with elegance and irony through works infused with humor and pathos—all salted with a rich assortment of choreographic and musical references. As Lewis Segal wrote in the Los Angeles Times, “Barsness left out very little and excused even less; he is a dance observer/critic of extraordinary pertinence—and sublime impertinence.”

“It was, believe me, a riot,” remarked Deborah Jowitt in her Village Voice review of Carol Clements' Dance Theater Workshop season. She went on to say, her concerts “show a sharp eye and a sharper wit ... shrewdly observed, terrifically performed, and irresistible.” In a New York Times review, Jennifer Dunning described Clements’ work as “amusingly observant and often touching.” Clements draws from the deepest sources of humor, one’s emotional confusion and the sometimes painful territory between private and public self.

So Low (1986), choreographed and performed by Carol Clements

In the serio-comic So Low, Clements dances encased in a full-length, skin-tight dress tethered at the end of its train by a concrete block, fracturing the persona of depression.

“If So Low was a dance based on a gimmick, the gimmick worked." —Jack Anderson, The New York Times

The Hesitation (2021), choreographed and performed by Vicki Angel

Taking inspiration from the conventions and contradictions in the everyday behavior of hesitating, each section highlights what it means to hesitate, or maybe not: Poem is a play on who may be doing the hesitating in a non-sensical poetic form; Lecture expresses the contradictions, absurdity and timing of hesitating; Waltz takes a nostalgic look at a dance from 1914.

A madcap and somewhat demented lecture demonstration on the excesses of opera. With great affection as well as abundant irony, Barsness dances to favorite excerpts and arias while regaling a captive audience with tales of operatic death, murder, and madness.

“Seven Endings was truly grand theater. Barsness shows us that in performance, as in life, some things can be accomplished only with a great deal of humor and self-irony.” —Corriere della Serra (Italy’s premier daily newspaper)

“No topic is sacred with Mr. Barsness, though he handles his themes with an intelligence, affection and deadpan innocence that make him good company.” —Jennifer Dunning, The New York Times

Underneath (1985), choreographed and performed by Vicki Angel

A solo that focuses on aspects of place: A physical space above or beneath a surface, and a mental space exploring a state of mind. Movement, seemingly unintentional but with increasing articulate physicality, is in conversation with the music of Alexander Scriabin’s prelude. What lies beneath the surface? Pick up a stone in nature and look at the world that is revealed underneath.

“Dancers as determined, as shrewd and fine as Angel seem to have an innate gift. Underneath is perfectly crafted.” — Sasha Anawalt, Los Angeles Herald Examiner

Now and Then I Remember (2021), choreographed and performed by Carol Clements

This tragi-comic solo lays bare the making of Clements’ first modern dance. The tell-all process attempts to recapture the innocence and naivety of her 1972 choreographic aspirations and, above all, bittersweetly enables her love of dancing to endure fifty years later.

The hourlong evening concludes with a surprise trio finale.

Vicki Angel’s choreography has been performed at Dance Theater Workshop (now New York Live Arts), LA Olympic Arts Festival, American College Dance Festival, Judson Memorial Church, Celebration Barn, Bearnstow, and in Beijing, China, among other venues. Her music video credits include choreographing for Little Richard. Vicki has had the pleasure of dancing with many NYC choreographers: Sharon Kinney, Bebe Miller, Nina Wiener, Kenneth Rinker, Susan Rethorst, Wendy Perron, Rosalind Newman and Martha Bowers. Vicki is on the faculty at Lincoln Center Education, where she was a Lead Teaching Artist from 2004–2018, and was on the dance faculties at Towson University, Connecticut College, California State University, Long Beach, Director of Long Beach Summer School of Dance, and Rotterdamse Dansacademie in Holland. She is a Certified Laban Movement Analyst and is on the NYC DOE DELTA leadership team of dance educators designing and facilitating professional development workshops.

Eric Barsness studied piano and acting as a teen in New York City before he began dancing and choreographing at Oberlin College. Invited by Brenda Way to become a founding member of ODC/San Francisco, he choreographed, performed and toured with the company for four years before returning to New York in the early 1980s. There, his solo and group works for Eric Barsness and Dancers were presented at venues including DTW, The Kitchen, the Joyce Theater, Dance Chance at Danspace, and PS 122, as well as in European tours. Noted for comic works that touch on the tragic, Barsness choreographed pieces such as Blood on the Keys (a docudance about Frederic Chopin) and a series of solos about an opera fanatic, all of which feature music as an integral narrative element. Barsness also danced in works by Jacques d’Amboise, Carol Clements, Charlie Moulton, Arnie Zane, and Bill T. Jones, among others. As a performer, he went on to a second act as a singer in opera and concerts. Other careers have included seventeen years at Condé Nast and his current work as senior vice-president of the nonprofit Puppies Behind Bars.

Carol Clements moved to NYC in the late 1970s for the vanguard dance world of lower Manhattan. From glittery international showgirl to appearing in music videos (Yoko Ono), experimental theater (Robert Longo), comedy clubs (Caroline’s, The Bottom Line), and feature films (SAG member), Carol maintained a primary focus in modern dance. She performed with numerous choreographers and pick-up companies, but she had the most fun dancing and touring for many years with Eric Barsness and Dancers and with longtime collaborator Barbara Allen. A recipient of two Jerome Foundation commissions for choreography, Carol’s own choreographic works have been presented at venues across the country and in NYC including La Mama, The Kitchen, Performance Space 122, the Brooklyn Museum, the Joyce Theater, Celebrate Brooklyn, Dia Center for the Arts, Boston’s First Night Festival, and two concert seasons at Dance Theater Workshop. With Allen, Carol co-created a commissioned film for television’s Saturday Night Live. More recently, Carol performed in and choreographed for Terri Hanlon’s video features (available on UbuWeb) and in a Jill Kroesen performance art piece at the Whitney Museum of American Art. She is author of Better Balance for Life: Banish the Fear of Falling with Simple Activities Added to Your Everyday Routine, teaches a variety of movement arts, and gives talks and events related to her book.