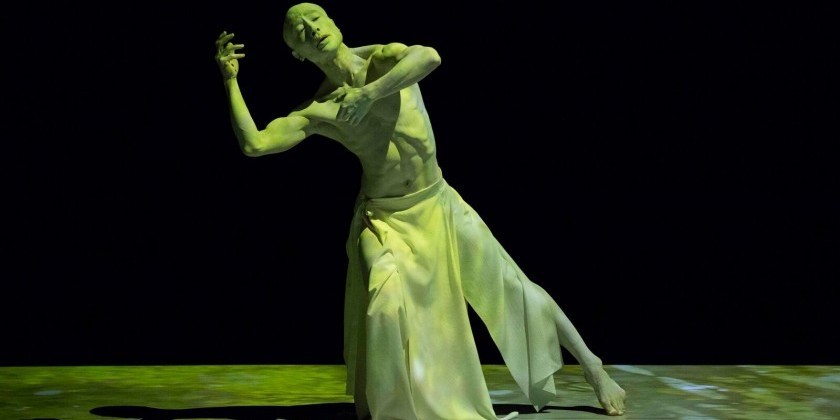 Vangeline Theater presents Japanese Butoh dancer Dai Matsuoka (principal dancer with celebrated butoh company Sankai Juku) on April 21, 2018, at 8pm at Cameo Studios, 307 W. 43rd Street, Studio A, NYC. With this performance, Vangeline Theater debuts its Studio Series, where audiences enjoy the unique opportunity to witness the skill and polish of talented dancers in an intimate setting. Tickets are $15 and can be purchased at https://nine.brownpapertickets.com. Doors open at 7:45pm - Space is limited to 60.

Dai Matsuoka is a Butoh Dancer and the Artistic Director of LAND FES. He has been a principal dancer with SANKAI JUKU since 2005 and has danced in eight Sankai Juku pieces including "Kinkan Shonen", "Tobari",  "Meguri" and "Unetsu".

Dai Matsuoka is also in collaboration with puppet company Phantom Limb (NYC) and a member of The Dance Archive Network dedicated to the preservation of Butoh legend Yoshito Ohno's digital motion data.

Vangeline is a teacher, dancer, and choreographer specializing in the Japanese postwar avant-garde movement form Butoh. She is the Artistic Director of the Vangeline Theater (New York), a dance company firmly rooted in the tradition of Japanese Butoh while carrying it into the 21st century, and the founder of the New York Butoh Institute.

Vangeline's work has been heralded in publications such as The New York Times ("captivating"), Los Angeles Times ("moves with the clockwork deliberation of a practiced Japanese Butoh artist") and LA Weekly, to name a few. Time OUT Chicago named Vangeline's "one of the best Dance Visits of 2011." More recently her BUTOH BEETHOVEN: Eclipse received critical acclaim in New York and was dubbed: "incredibly moving and powerful. It is clear that Vangeline is an artist who knows the darkness of Butoh well and has the incredible skill to make that darkness dance...Vangeline has the control and poise of a true master of Butoh."
With her all-female dance company, Vangeline's socially conscious performances tie together Butoh and activism. Vangeline is the winner of the 2015 Gibney Dance's Beth Silverman-Yam Social Action Award. Film projects include a starring role alongside actors James Franco and Winona Ryder in the feature film by director Jay Anania The Letter (2012-Lionsgate). She is pioneering a project exploring the intersection of Butoh and Neuroscience and has recently been invited to perform with/for Grammy Award Winning artists SKRILLEX and Esperanza Spalding.

VANGELINE THEATER/ NEW YORK BUTOH INSTITUTE aims to preserve the legacy and integrity of Japanese Butoh while carrying the art form well into the future. The unique art of Butoh originated in post-World War II Japan as a reaction to the loss of identity caused by the westernization of Japanese culture, as well as a realization that ancient Japanese performing traditions no longer spoke to a contemporary audience. One of the major developments in contemporary dance in the latter half of the 20th century, Butoh combines dance, theater, improvisation and influences of Japanese traditional performing arts to create a unique performing art form that is both controversial and universal in its expression. The Vangeline Theater is home to the New York Butoh Institute, dedicated to the advancement of Butoh in the 21st century.