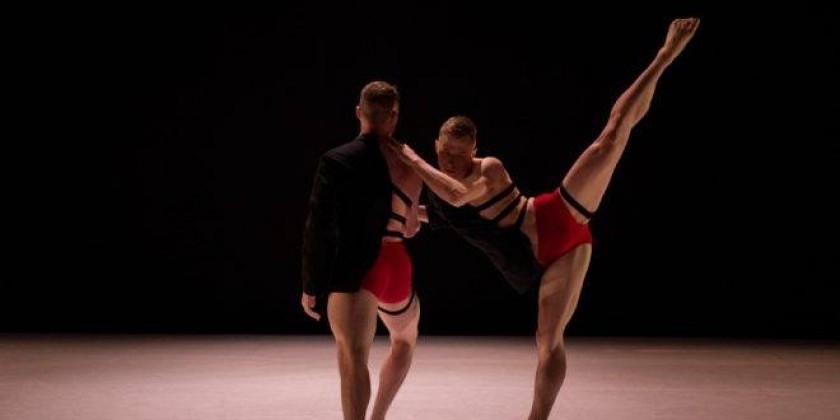 10 Hairy Legs, the all male repertory dance company, provides a deep exploration of modern technique and the creative process, taught by founding Artistic Director Randy James and company members who are Master Teachers in their own right.

Daily schedule includes Ballet Barre, Contemporary Technique and Creative Process, along with ‘Lunch Talks’ with the company.
Informal public showing of work created during the intensive on Saturday, January 6 / 4:00pm

10 Hairy Legs provides a wide range of education programs for all ages focusing on the many facets of maleness as expressed through dance, serving more than 6,500 students and educators each year. In 2015 10 Hairy Legs launched 10 HL Projects, which includes women for specific productions outside of the all male company.


Randy James, Founding Artistic Director of 10 Hairy Legs, has made a significant impact in the field of dance for more than three decades locally, regionally, nationally and internationally as a highly regarded dancer, choreographer, teacher, guest lecturer, panelist and staunch advocate of the arts. His impact in the field led The Geraldine R. Dodge Foundation to cite him as “The Patron Saint of New Jersey dance” in 2010. As a choreographer, James has created more than 40 works on his own companies and on 16 other professional companies throughout the United States, garnering positive reviews from The New York Times and The Village Voice. The New Jersey State Council on the Arts/Department of State honored him three times with Choreography Fellowships in 1995, 2002 and 2014 in recognition of his artistic excellence and named him “Distinguished Teaching Artist.” As an Associate Professor of Dance, James has been a member of the dance faculty at Mason Gross School of the Arts, Rutgers University, since 1998.

Alex Biegelson dances with Zvi Dance and has worked with Carolyn Dorfman Dance Company, Nicole Smith, Project: Smith; Nimbus Dance Works, Randy James Dance Works, and toured internationally with Freespace Dance. Alex is a Founding Member of 10 Hairy Legs and serves as our Associate Director. Born and raised in New York City, Alex has been involved in theater and dance since the age of nine. He took a unique route to dance by working with Susan Slotnick touring around the tri-state area in 1997 in her work Figures in Flight. In 2001 he furthered his traditional dance training at the Professional Performing Arts High School in Manhattan and the Alvin Ailey School though the PPAS program as a fellowship student within the Junior Division. Alex earned his BFA from Mason Gross School of the Arts, Rutgers University in 2009. Alex is a founding member of 10 Hairy Legs and serves as Associate Director.

Derek Crescenti, originates from Detroit, Michigan. He received his BFA from the University of Michigan where upon graduation he was awarded the 2011 Earl V. Moore Award in Dance. He danced with Donald Byrd’s Spectrum Dance Theater in Seattle, WA from 2011-2014 and has also worked with Nejla Yatkin, Gierre Godley, Keigwin + Company and the Mark Morris Dance Group in The Hard Nut and L’Allegro, il Penseroso ed il Moderato. He has performed works by Donald Byrd, Olivier Weavers, David Parker, Doug Elkins, Doug Varone, Manuel Vignoulle, Megan Williams and while at the University of Michigan, Rennie Harris, Laura Dean, Paul Taylor and Merce Cunningham (arranged by Jean Freebury). Other training includes San Francisco Conservatory of Dance, Merce Cunningham Studio and the American Dance Festival where he performed a world premiere by Tatiana Baganova. Derek also dances with Daniel Gwirtzman Dance Company.

Will Tomaskovic, from Flemington, NJ, received his early dance training at Princeton Dance and Theater studio under the tutelage of Susan Jaffe and Risa Kaplowitz. He graduated from Mason Gross School of the Arts at Rutgers University with his BFA in Dance. While at Rutgers he performed works by Stefanie Batten-Bland, Julie Bour, Julia Ritter, John Evans, Jennifer Muller/The Works, Merce Cunningham (arranged by Banu Ogan), as well as Randy James. In 2014, Will traveled to Istanbul to perform an immersive theater work with Julia Ritter/Ayrin Ersoz. He has apprenticed for Keigwin+Co for their Joyce Season, is a performer with Bryn Cohn + Artists, a teaching artist with Man in Motion, Inc., and is a current member of Zvidance.