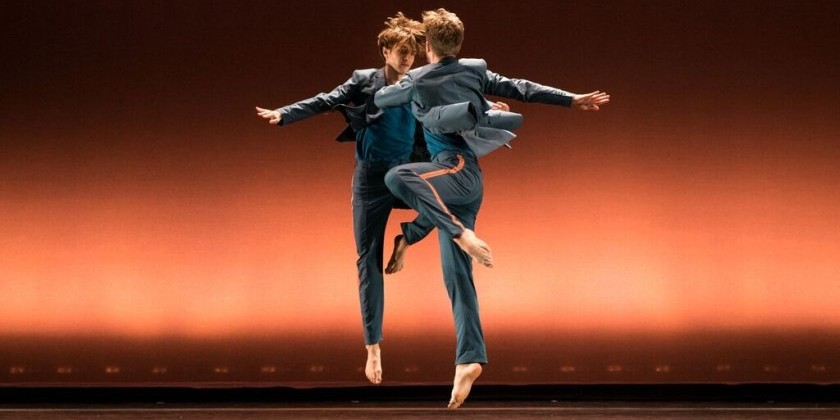 A surrealistic homage to Hieronymus Bosch's
"The Garden of Earthly Delights"

"The work is marvelous ... Mr. Tynek is an undoubted talent, a choreographer who seems fascinated by movement itself and the strange, subtle ways in which it communicates strange, subtle things."
- The New York Times

"As contemporary choreographers go, Dusan Tynek is a rare breed"
- Time Out NY

Le Jardin Qui Rit is a surrealistic and allegorical homage to creation, the beginning of all things, and is inspired by the middle panel of the iconic triptych "The Garden of Earthly Delights" by Hieronymus Bosch. The Czech-born Týnek says, "I am not seeking to recreate the mad world of freely cavorting humans and beasts in the painting, but rather create a theatrical world of its own making, rules and dramas. This is a place of my imagination anchored in the real experiences of an avid gardener and observer of life."

Týnek's residency and performances at Baruch Performing Arts Center are supported by the CUNY Dance Initiative (CDI), which receives major support from The Mertz Gilmore Foundation, the Howard Gilman Foundation, and the Stavros Niarchos Foundation. Additional support is provided by the Jerome Robbins Foundation and the Harkness Foundation for Dance. CDI is headed and administered by The Kupferberg Center for the Arts at Queens College. www.cuny.edu/danceinitiative

"Mr. Tynek's depth as an artist can be best sensed in how he moves bodies"

Dusan Tynek and his Brooklyn-based dance company Dusan Tynek Dance Theatre (DT)2 are known for their striking blend of theatricality and musicality in formally structured modern dance. The company has garnered critical acclaim and built a reputation for productions known for their high level of innovation, sophistication and expert craftsmanship as well as for the exceptional level of artistry of its dancers, musicians, and designers. Since founding his own company in 2003, Týnek has created over 30 dances, choreographed for opera, and held ten critically-acclaimed seasons in major dance venues in NYC (BAM Fisher, Joyce Theater, New York Live Arts, The Kitchen, Tribeca PAC, Baruch College, Lynch Theater at John Jay, Alvin Ailey, and more). (DT)2 performances have been named "Best of the Year" on several occasions by the New York Times and the Huffington Post. Týnek has been recognized with commissioning grants from the NEA, NYC DCA, and the Harkness, Greenwall, and O'Donnell-Green Music and Dance foundations. Týnek has also been the recent recipient of fellowships from Bogliasco in Italy, The Hermitage Artist Retreat in Florida, and Djerassi in California, among others.

In addition to stage work, the company has created many original works for museums (the Metropolitan Museum of Art, The Ringling Museum of Art), James Turell's "Skyspaces" located in Florida and Texas, and seven flooded granite quarries on Cape Ann, MA. The company has participated in festivals around the U.S., Europe and Russia. For additional information go to: www.dusantynek.org

Aleksandra Vrebalov has composed a wide range of works including concert music, opera, dance scores (for Rambert Dance UK, Dusan Týnek Dance Theatre, Take Dance, Scottish National Ballet, Providence Festival Ballet, Limon Dance, Augsburg Theater, and English National Ballet), and sound installations in collaboration with architect Ronit Eisenbach.  Her most recent works have been commissioned by Carnegie Hall for Kronos Quartet and Belgrade Philharmonic. Vrebalov, a fellow of MacDowell Colony, Rockefeller Bellagio Center, Djerassi, The Hermitage, and Tanglewood, is the recipient of The Harvard Fromm Commission, The American Academy of Arts and Letters/Charles Ives Fellowship, and two Golden Badges from her homeland: one for Vrebalov's opera Mileva and its contribution to Serbian opera, and the other for a lifelong contribution to Serbian culture. Vrebalov's works have been recorded for Orange Mountain Music, Nonesuch, Cantaloupe, Innova, Centaur Records, and VMM.  Her two works for Kronos Quartet, Beyond Zero: 1914 - 1918 and The Sea Ranch Songs, are available as DVDs with films by Bill Morrison and Andrew Lyndon.  Apart from her opera in progress, Abraham in Flames, Vrebalov's recent work was inspired by Asian music with two new pieces: one with shakuhachi, commissioned by Kyo-Shin-An Arts, premiered by New York's shakuhachi Grand Master, James Nyoraku Schlefer; and the other with ancient Chinese instruments for The Forbidden City Orchestra in Beijing. In 2018 Vrebalov contributed to the soundtrack for Alla Nazimova's silent film "Salome" (1923) restored by the Library of Congress and Kino Lorber. Vrebalov lives in New York City. www.aleksandravrebalov.com

Roderick Murray has been designing lighting and installations for performance both nationally and internationally since 1989. He has designed the lighting for all of Dusan Tynek's works since 2003. The majority of his work has been with dance, both experimental and traditional, and music/opera. He has toured extensively throughout the world, and has designed many projects for Ralph Lemon, Kimberly Bartosik, Benjamin Millepied, Dusan Tynek, Wally Cardona, Yanira Castro, and many others. His work has been seen on Sekou Sundiata, Yasuko Yokoshi, Ethel, Scotty Heron, Bill Young, Hot Mouth, Kathy Westwater, New York City Ballet, Ballet di Roma, American Ballet Theater, Ballet du Grand Théâtre de Genève, the Lyon Opèra Ballet, Ballet Collective, Dortmund Ballett, Karen Sherman, Luca Veggetti, Tim Fain, Melinda Ring, Donna Uchizono, Cori Olinghouse and many other companies and artists. He also performed for nine years with the fabulous Circus Amok and was recently the DJ in Jérôme Bel's "The Show Must Go On."

Baruch Performing Arts Center (BPAC) is an acclaimed performing arts presence. Located in the heart of Manhattan just east of Chelsea and the famed Flatiron building, BPAC presents renowned classical music, opera, jazz, theater, dance, discussion, film, and innovative cross-genre programming. BPAC has presented more than 1,000 cultural programs in its five spaces since 2003. Its curated season of 36 programs annually emphasizes new work experienced in intimate settings, the diversity of American culture as exemplified by Baruch students (who come from 130 different countries), and work that lives at the confluence of art and social justice.