A Celebration in Honor of Lar Lubovitch

CAPTURE / RELEASE: A CELEBRATION IN HONOR OF LAR LUBOVITCH,
COMMISSIONED BY COMPOSER PAOLA PRESTINI’S COMPANY VISIONINTOART,
TO MAKE WORLD PREMIERE JUNE 25 AT MICHAEL SCHIMMEL CENTER FOR THE ARTS
AS PART OF RIVER TO RIVER FESTIVAL 2013

Co-presented by LMCC, Pace University, VisionIntoArt, and Lar Lubovitch Dance Company
as part of the River To River Festival 2013 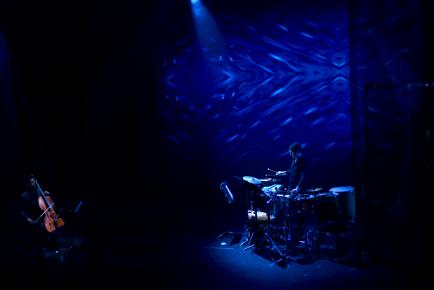 Paola Prestini, in addition to being among the “Top Composers in the World under 40” (National Public Radio), is an exceptionally omnivorous commissioner, producer and curator of new work—her own and that of various other artists. Her company VisionIntoArt (VIA) kicks off its most robust New York season to date with the VIA-commissioned and -produced Capture / Release: A Celebration in Honor of Lar Lubovitch. LMCC, Pace University, VIA and the Lar Lubovitch Dance Company co-present the work June 25, 7:30pm at the Michael Schimmel Center for the Arts (3 Spruce Street) as part of River To River Festival 2013. The evening is free and open to the public.

The evening marks a return to River To River Festival by VIA, following last year’s acclaimed premiere of Prestini’s Oceanic Verses. VIA also appears in this year’s festival with Anna Clyne’s VIA-commissioned Violin (July 9 at Federal Hall), a co-presentation with Original Music Workshop (OMW), the heralded Brooklyn new music venue of which Prestini is Creative Director.

VisionIntoArt (VIA) is a non-profit new music and interdisciplinary production company that creates and develops new work. With the belief that collaboration sustains artistic innovation, VIA creates and commissions works that involve various disciplines, presented around the world for the general audience, and forged from the most exciting emerging and established artists living today.

Established in 1999, VIA was co-founded by Paola Prestini, a composer herself, who wanted to develop a broader platform for the commissioning of new music-driven interdisciplinary work. By supporting new works that brim with artistic and intellectual virtuosity, VIA gives voice to the foremost emerging and established composers and their collaborators. By developing their works through collaboration—through commissions, marketing, contracting, web presence—VIA is creating a successful model for artists to thrive in the 21st century musical ecology while simultaneously cultivating their visions into art.

The Lar Lubovitch Dance Company was founded by Lar Lubovitch in 1968 and is now celebrating its 45th anniversary with a national tour as well as a two-week season at the Joyce Theater (October 8-20, 2013). The company has gained a reputation as one of the world’s foremost modern dance companies, having performed in virtually every state of the US and in more than 40 foreign countries. www.Lubovitch.org.

LMCC, a 501(c)(3) nonprofit, has been a leading voice for arts and culture since 1973, presenting cultural events in Manhattan, advocating for artists and the arts, and working in partnerships to improve the quality of life for the New York City’s workers, residents, and visitors.

River To River is made possible with support from the Alliance for Downtown New York, American Express, The Lower Manhattan Development Corporation, HUD, The Port Authority of New York and New Jersey, Westfield World Trade Center, and in part by the New York City Department of Cultural Affairs in partnership with the City Council, as well as other underwriters. www.RiverToRiverNYC.com

Lower Manhattan Cultural Council (LMCC), a 501(c)(3) nonprofit, has been a leading voice for arts and culture since 1973 dedicated to presenting cultural experiences Downtown, making Manhattan a thriving center of arts activity with relevance to the arts community worldwide, and working in partnership to improve the quality of life for the New York City’s artists, workers, residents, and visitors. http://lmcc.net

Pace University is located one block east of City Hall and immediately adjacent to the Brooklyn Bridge. The Michael Schimmel Center for the Arts regularly hosts academic and community events in addition to its yearly schedule of cultural activities.