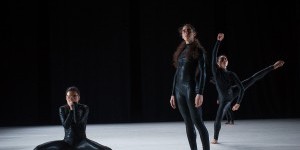 It is pouring outside studio 320 at Abron’s Art Center where I am a guest at a rehearsal of improvisation.

David Watson, musician, perhaps responding to the weather, creates heavy water droplet sounds with his laptop. Luciana Achugar removes her sweatshirt and swings it with abandon around her upper body. Her back is towards me. Half -naked and lost in commitment to her moves, she doesn’t even realize I am in the room.

Suddenly, the lyrical Achugar becomes a witch. Exactly how the transition occurs I am not sure, but it has something to do with speed and intensity.Loose- limbed pleasure and the freedom of near nakedness are overtaken by a pair of arms whispering to their owner,“let her rip.”And she does. (Note: in improvisation you listen to your body.)

Her form hardens: angles emerge, elbows point, fingers spread, knees punch the air. Achugar’s gaze narrows and fixes on a point outside the window, and whoever is on the receiving end of that look should watch out.Yet, before I am lost in the world of sorcery, the image fades away. Achugar’s concern shifts from casting a spell to exploring seams in the floor.

I don’t notice Levi Gonzalez at first.This other dancer/improviser in the room is hanging out on the periphery, sprawled lankily on a group of stacked chairs. He watches. (Note: watching is active, not passive.)His eyes remain with Achugar as the back of his body slides along the chairs. His butt hits the keys along an upright piano (surprisingly not too much sound here) and finally, he ends up semi- perched on the window ledge--ready to pounce. Anything can happen. The air is charged with possibility.

It may seem a strange concept to “rehearse” for an improvisation but for these artists it is not.

Really, rehearsal is about getting used to playing together, getting familiar –not too familiar, no one wants to default into boring performing habits-- but familiar enough to respond and riff off each other.If they can be supple and courageous with their exchanges, the resulting work, set to premiere on Friday December 2nd at St. Marks Church, will be a captivating evening length experience.

"Evening length equals 45 minutes," Achugar notes. That should be enough time for ticket holders to feel they have gotten a good show.

Watson says, "better a great 45 minutes then a dull hour."

I haven’t seen anything dull yet.

THIS ARTICLE WAS ORIGINALLY PUBLISHED IN FEBRUARY OF 2011- CONTINUE TO EXPLORE MOVEMENT RESEARCH for new ideas and creative work in the field of contemporary performance.

Movement Research Festival Fall 2011: The 20th Year Celebration:Devotion, Rigor, and Sustainability
Performances will take place Monday, Thursday, Friday, and Saturday. Each night of performance takes one of these qualities as the guiding force, and one night embraces all three together. For more information about classes/performances during the Festival, click here