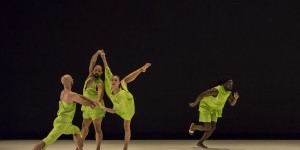 DANCE NEWS: Be An #ArtsHero partners with The American Circus Alliance (ACA) for "Arts Workers Unite: 100 Days of Activism"

For the First Time in American History, the Circus Community has Unified in Collective Action to Petition Washington for Economic Relief

Be An #ArtsHero, the non-partisan grassroots coalition working to mobilize all disciplines and regions of the Arts & Culture sector, is proud to announce a partnership with The American Circus Alliance (ACA), the first coalition of Circus Arts Workers united to represent and support Circus Arts in America, as they aim to create a national conversation highlighting the Arts & Culture sector and its economic value. The partnership between Be An #ArtsHero and The American Circus Alliance seeks to advocate for the relief, recovery, and recognition of the Arts & Culture economic sector, which brings a massive $877 billion in value added to the U.S. economy while providing 5.1 million American jobs.

In the open letter released as part of the campaign, the American Circus Alliance writes, “the history of the American Circus is a quintessential American story, filled with self-starting entrepreneurs making substantial contributions to our economy and culture. Having survived a myriad of challenges for over two centuries, the American Circus holds a storied place in our history. A testament to the rich legacy of circus in America, The Smithsonian describes one of the first circus performances in the country as having ‘dazzled President George Washington and other audience members with athletic feats and verbal jousting.’”

A recent survey conducted by The American Circus Alliance of 178 US circus professionals (representing 45 companies and 133 individuals) reported an economic loss of $24.6 million dollars in the last year, on average a loss of 77% of their annual income. 69% of those surveyed report that these financial losses and related career setbacks jeopardize their ability to continue professional activity.

Be An #ArtsHero and the American Circus Alliance call for the establishment of a Secretary of Arts and Culture in the federal Cabinet; and urges that the contours of both the Defend Arts Workers Now and Putting Creative Workers To Work proposals be incorporated into The American Jobs Plan, and “asks for recognition that the arts in America are vital not only to the mental and emotional well-being of our citizens, but to the economy and future of the country,” according to the penned letter.

American Circus Arts Workers and Supporters are encouraged to sign their name to the open letter, contact their representatives, and share their stories on social media using the campaign hashtags #ArtsWorkersUnite and #CircusWorkersUnite. Visit https://beanartshero.com/circus-letter for more details on how to get involved. Graphics for the campaign can be found here.

Arts Workers Unite: 100 Days of Art and Activism launched on January 20, 2021  and mirrors the first 100 days of the Biden/Harris Administration. In this critical period where the new administration will seek to enact its agenda, Arts & Culture must be a top priority for economic revival and national reconciliation. To date, the campaign has included the Dear Mr President and Madam Vice President: Historic Letter Writing Campaign in partnership with the Dramatists Guild of America, and Political Cartoonists in partnership with Counterpoint.

ABOUT THE AMERICAN CIRCUS ALLIANCE

The American Circus Alliance began in early 2020 when a small group of American circus practitioners began convening over zoom to discuss the effects of COVID-19 on their professional endeavors. This group has grown and the conversation has expanded to include many issues facing the American circus industry: equity, diversity, and inclusion; insufficient recognition and funding for circus as an art form; the collective need for insurance; how to revive live circus after COVID-19; and how to bridge the enormous gap between circus students and the profession. To tackle these issues, this group began conceiving programs that will bolster the performance and production of American circus. To follow the conversation, visit their website or Instagram.

ABOUT BE AN #ARTSHERO

Be An #ArtsHero is a national, non-partisan grassroots movement that emphasizes Arts & Culture’s contribution to the economy. Be An #ArtsHero is a united, intersectional, sector-wide coalition that exists to defend and position the Arts & Culture sector of the U.S. as a legislative priority for support and investment commensurate with our socio-economic value. BAAH’s Open Letter to the US Senate has been signed by more than 16,000 supporters, including rank and file, blue collar Arts Workers; leaders of major Arts organizations; and countless high-profile celebrities. BAAH is endorsed by American Theater Wing, Broadway Cares/EquityFightsAIDS, Dramatists Guild, Costume Industry Coalition, Young Audiences Coalition, Ovation TV, FreelancersUnion, ExtendPUA, Touring Professionals Alliance, SIMS Foundation and many more.

DANCE NEWS: Kaatsbaan Cultural Park to Receive $15,000 Grant from the National Endowment for the Arts

DANCE NEWS: THE BESSIES ANNOUNCE RECIPIENTS OF THE 2022 NY DANCE AND PERFORMANCE AWARDS