Artists at Work, an Ambitious National Initiative Inspired by the WPA, Launches in Western Massachusetts 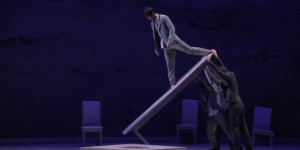 Today Jacob’s Pillow—National Historic Landmark, National Medal of Arts recipient, and home to America’s longest-running and largest dance festival—announces plans to host a multi-platform virtual and on-site Festival in 2021, undertake substantial renovations to the Ted Shawn Theatre, and complete Vision ’22, a five-year strategic plan established in 2017. The organization has launched the public phase of its Dance We Must fundraising campaign to support the final leg of Vision ’22—including the completion of Ted Shawn Theatre renovations by the organization’s 90th anniversary in 2022—with $2 million to raise towards a goal of $22 million.

“The Pillow has endured, despite experiencing the toughest year in our history with the cancellation of Festival 2020 and the tragic loss of the Doris Duke Theatre. We put these losses in the context of all of the tragedy our country, and the world, has experienced this past year,” said Pamela Tatge, Executive & Artistic Director. “Back in 2017, we set ambitious goals for the future and the evolution of Jacob’s Pillow. We have had extraordinary momentum thanks to the generosity of our Board and the many donors who understand the importance of investing in dance and artists. There is still so much to do, but with the support of our community—everyone who knows and loves the Pillow—I’m confident that we will complete the final chapter of our plan, the Ted Shawn Theatre renovation, in time for our 90th Anniversary in 2022.”

The Ted Shawn Theatre is the centerpiece of Jacob’s Pillow, opening in 1942 as the first theater in America built specifically for dance. Many of the world’s most notable dance artists have performed and premiered works on its stage, international companies have made their U.S. debuts, and many careers have been launched in this iconic performance space. All Pillow artists since 1982, and many from the previous decades, are recorded and housed in the Pillow’s extensive Archives.

The Ted Shawn Theatre renovation will provide much-needed upgrades backstage and in the performance space and will also include a new ventilation and air-conditioning system, a necessity for post-COVID-19 performances. Additional renovation details can be found below.

About Vision ’22 and the Dance We Must Campaign

Vision ’22 is an ambitious strategic plan established in 2017 and led by Executive & Artistic Director Pamela Tatge. Vision ’22 has fortified the Pillow’s existing programs and put new emphasis on three goals: strengthening the Pillow’s artistic core, boosting civic leadership and community engagement, and renewing campus facilities. Two threads run through all of the plan’s activities: strengthening inclusion, diversity, equity, and access at the Pillow; and advancing environmental sustainability. Of the $22 million needed to accomplish the goals of the plan, $2 million remains to be raised. Jacob’s Pillow launched its public Dance We Must fundraising campaign today with a goal of raising that sum by April 2022, in advance of the 90th anniversary Festival.

“It was a real challenge to come this far without an anchor gift,” said Tatge. “In 2019, the family of treasured Pillow Trustee member Wendy McCain stepped forward with that gift. I’m so grateful to Wendy and her daughter, Dr. Victoria Nosler, who serves on the Board of the Shelby Cullom Davis Charitable Foundation and recommended a grant of $3 million towards the Ted Shawn Theatre renovation, in honor of her mother.”

The campaign title is inspired by statements made by Jacob’s Pillow founder Ted Shawn during World War II:  “Jacob’s Pillow has great and necessary work to do...and we must carry on no matter what the difficulties...Dance we must!”

Components of Vision ’22 include:

The Ted Shawn Theatre renovations are the final chapter of Vision ’22. The Pillow broke ground on this $8 million project in January 2021, and is working with Boston-based Flansburgh Architects and Berkshire-based Allegrone Construction on the project. Plans for the Ted Shawn Theatre upgrades have been in the works since 2018.

After cancelling Festival 2020––the first Festival cancellation in its 88-year history––Jacob’s Pillow is committed to presenting a multi-platform dance festival in summer 2021, featuring in-person, outdoor performances from leading dance artists across genres (June 30-August 29, 2021) and virtual streaming of their work, accessible to dance fans around the world. Artist and performance details will be announced in April 2021.

“It is vital that we help to put artists back to work this summer and we know that audiences are longing to come together again, provided there are strong COVID-19 safety protocols in place,” said Tatge. “We are excited to give many of the Festival artists residencies on campus just prior to their engagement so that they have the time and space they need to prepare to perform for live audiences again. All Pillow performances will have limited capacities due to social distancing requirements. Those who aren’t able to visit in person will have the chance to view these performances online, joining the thousands of audiences around the U.S. and abroad who experienced the Pillow for the first time last summer.”

With the health and safety of artists, audiences, and staff as a top priority, the Pillow will set rigorous COVID-19 protocols. Protocols will be announced later this spring, based on the recommendations of expert medical professionals and in accordance with national medical guidelines and state regulations.

Jacob's Pillow Dance Festival 2021 also features talks, classes, exhibitions, and site-specific works that will invite audiences to explore its 220-acre campus in the Berkshires of Western MA in new ways. On-site and virtual professional training programs will be offered at The School at Jacob’s Pillow.

Built in 1942 by Joseph Franz (the same architect who designed Tanglewood’s Koussevitzky Music Shed), the Ted Shawn Theatre is America’s first performance space designed specifically for dance. Today visitors still experience the theater in much the same way as audiences did in the 1940s with hand-hewn native spruce and pine beams, knotty pine siding, and bare wood floors setting the simple, spacious tone.

The Ted Shawn Theatre has undergone numerous updates over the years, including an added mezzanine in 1959, expanded stage, dressing rooms, and loading dock in 1992, and new seats in 2013. Over the decades, theatrical technology has transformed, accessibility standards have advanced, safety requirements are more rigorous, and audiences expect more comfort than a theater built 78 years ago can provide. Moreover, the current Ted Shawn Theatre cannot host artists, staff, and audiences safely in a post-COVID-19 world. Jacob’s Pillow will upgrade the ventilation system and add air conditioning in order to host performances in this space for the 90th anniversary Festival in 2022.

“The timbers that hold up the roof of the Ted Shawn Theatre also support the lighting and rigging, and those timbers are tired,” said Tatge. “We have no choice but to create a new steel-reinforced stage area, and this enables us to expand its size so that we can accommodate larger and more complex productions. The audience experience will remain mostly the same, except they will now be cool and comfortable!”

Dance News: NOT TO BE MISSED... Jacobs Pillow and the Williams College Museum of Art Present Dance We Must: Treasures from Jacobs Pillow