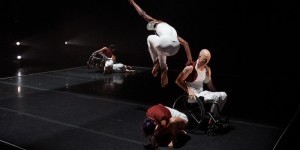 Dance News: The Next Phase of Gibney Dance—An Open Letter From Gina Gibney

For the past few years, we at Gibney have been working behind the scenes to build a new wing at 280 Broadway.

This expansion will “close the loop” on the second floor and activate 10,000 square feet of space that was previously raw and underutilized. We broke ground this fall and have been working steadily on this space-making project since then. You may have caught a glimpse of the demolition, noticed the Masonite pathway bridging the site to our freight elevator, or stood next to a construction worker who was zapping her/his lunch in the microwave.

I hope you are curious!

Throughout February six studios will come alive with residencies, rehearsals, classes, and more. Five of these studios will be able to accommodate large groups and robust activity. The space in the northwest corner, connecting to our existing theater, will be a fully equipped black box that can host production residencies and performances. Right next to it will be a swing space that can be used as a production office, break out rehearsal room, child-care space, or production booth.

We have been actively working on the project for some time (and planning it for longer) but we really can’t imagine what it’s going to be like to have all six studios fully activated. Our Company Co-Director Nigel Campbell has coined a name for the new combined facility: Dance Heaven.

Beginning in early February, the new studios will be open. By the end of the month, all will be in full swing, surrounding a beautifully renovated corridor, a quiet work nook, a water fountain, and gender-neutral bathrooms. You’ll also notice some details around the existing space, including a new ceiling in the studio hallway, a new storage area and some improvements to the theater seating, and the renumbering of a few studios.

But to us, this is about much more than space. It’s about the future of dance and performance and the way that we can use our resources to make an impact. For us, supporting artists is about making sure that many voices are heard, that work has a chance to flourish, and that it resonates and finds its audience. We want to support artists because their work can create change in the world.

Our Next Phase is about embracing our growth and endeavoring to provide as much support as possible to a field that is sorely lacking infrastructure. A place to work and reflect, studios that remove barriers to creativity, a meeting ground for colleagues (and coffee!), or a space for training or developing new skills, the support of being in it together. We hope you will continue to find these things at Gibney.

We appreciate your patience as we work out the kinks, complete construction, and sort out how to operationalize the new combined spaces and all the amazing artistic activity that will take place there.

I hope you know how much we appreciate all of your support and partnership – and your dedication to the field we all love so much.