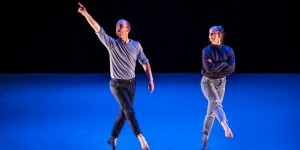 Published on May 7, 2015
Photo courtesy of WestFest

A Site-Specific Dance Festival in the Historic Westbeth Artists Community

Dance often architects the space in which it appears. Using the four-cornered stage like a frame, choreographers exploit lights, props, and scenery to enhance their creations. Site-specific work turns this conceit on its head. Instead of using the space to suit their work, dance-makers must suit their work to the space, their pieces created in response to the contours and stimuli of a given environment.

WestFest’s “All Over Westbeth” takes advantage of the site-specific possibilities of the Westbeth Artists Community, an enormous complex in the far West Village. A former Bell Laboratory, the buildings were repurposed in the 60s to provide inexpensive housing for creators of all stripes. Curators Carol Nolte and Carol Mendes say, “WestFest itself was born from the idea of embracing the outstanding artist history at the Westbeth's building.” In “All Over Westbeth,” residents lead tours through the sprawling compound for small groups to witness short spurts of dance unfolding in the most unexpected of places.

The tour begins in the low-ceilinged basement where, in one dim, creepy room, a trio of combat boot-clad women from Carol Mendes & Artists dart and clamber, their frantic compulsions only halted when they bump into a wall, or each other. The glorious roof deck showcases Keeley Walsh’s The Lovelies’ improvisational jam. A party for 20+ happy-go-lucky dancers, we’re invited to join, and some of our group actually do, cavorting with the mass of bodies under a sparkling sun.

Several pieces paint a complex relationship in just few ticks of the clock hand. Situated in a haphazard room that holds merchandise for the Westbeth Flea Market, Alvaro Gonzalez and Megan Minturn of Catherine Gallant/Dance negotiate across a desk; they tap their fingers and stand up on chairs in agitated bids to outmaneuver each other. In a dance studio scattered with scarlet rose petals, Stanton Jacinto and Caroline Dietz of Callie Hatchett Dance lunge and circle their heads in a zesty, Spanish-flavored duet, their faces emblazoned with contorted desire.

Part of the fun stems from figuring out what is, and what is not, part of a performance. As we head toward the stairs, a group of individuals singing “Goodnight, Irene” captures our attention. Peering over the rails, we spy arms, torsos, and faces slipping in and out of the rectangular canvas created by endless flights of rotating stairs. These are performers from The Little Streams/Emily Carver who sing us down the steps. A random woman with a bowl and silver tongs turns out to be the live musician for The Dancing Mathematician, a solo of sculptural poses conceived of and executed by LA Kilpatrick. The old man with a walker who chews out our guide, well, he’s just a grumpy resident peeved that the hallway is cluttered with showgoers. The coughing and laughing and conversing and ogling of Westbeth residents that accompany the pieces are local color, sometimes distracting from, while other times adding to, the anything-can-happen nature of site-specific work.

It’s dance, dance, dance at Westbeth. Even when the hour-and-a-half tour closes, visitors can watch Capoeira Luanda in the courtyard for an ongoing performance. There’s also the sheer thrill of being in proximity to so many creative spirits gathered under one roof.