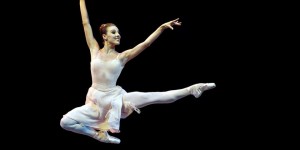 The Mother, Choreographer and Nominee for Outstanding Production Chats with The Dance Enthusiast

In the three years since the New York Dance and Performance Awards (“Bessies“) have returned from their brief hiatus we have seen diversity abound through an expanse of categories and a range of exciting nominees.

In this season’s Bessie Awards Interview Series, The Dance Enthusiast seeks to represent that diversity. There is so much greatness in this year’s pool of artists – the beautiful movement of Mimulus Cia de Dança’s Dolores, the sociopolitical commentary of Camille A. Brown’s Mr. TOL E. RAncE, the cultural celebration of Asase Yaa’s Djembe in the New Millennium – and those are just some of the nominees for Outstanding Production. Add to that revivals that range from Twyla Tharp to Nora Chipaumire, performers from across the globe, and designers who seem to know no bounds, and you truly see the best of what New York Dance and Performance has to offer.

So how does one become a Bessie nominee? What kind of training, practice, process, and narrative defines such an artist? There may be no singular answer, but each of the creators in our Dance Enthusiast Bessie series generously offers a glimpse of their experience along with some fun anecdotes in the fashion of dance enthusiasm.

Enjoy getting to know these nominees and we hope to see you on the red carpet outside the Apollo Theater in Harlem on October 20!

Liz Gerring was born in San Francisco, grew up in the Los Angeles area and began studying dance at age 13. In high school she studied dance at the Cornish Institute in Seattle. In 1987 she received a B.F.A. from the Juilliard School where she studied with Kazuko Hirabayashi and Doris Rudko. In March 1998, she presented her first piece, a four-hour movement installation. Since then, The Liz Gerring Dance Company has presented work nationally. The New York Times has included her two most recent choreographies in its annual top ten dance lists in 2011 and 2013 respectively, and her latest work, 2013's glacier, has been nominated for a Bessie.

When asked to describe her creative style and process in five words or less, Liz Gerring offers “hard, effortful, slow, and meaning.” These words could also describe her artistic story, although I would add grateful to round out the list. She proudly describes herself as “a working mom,” who spends her time yelling at her children to do homework and put shoes away when she’s not creating. She understands she is fortunate to have both family and artistry and, at times, struggles with the balance; a balance she admits is continuously shifting. Gerring is clear about one thing though, "In the studio I have my ‘All About Me’ hat on. Then I go home and I put on my ‘Never About Me’ hat, the hat you wear as a parent." Both have been necessary to her survival and success.

As a child, Gerring remembers her mother wanting her to participate in various creative activities. Eventually, when her mother realized how active she was, she placed her in gymnastics. Her mother tried to put her in ballet around five or six but Gerring did not like the "authoritative manner of the teacher." Discipline didn't appeal to her at all. However, at thirteen, Gerring decided she wanted to dance and began ballet classes. She enjoyed ballet despite understanding she did not have the best body type for the technique. It wasn't until a summer at Idyllwild Arts Academy that she discovered modern dance through founding chair Bella Lewitzky and her company. Suddenly dance felt good. "I'm much better at this than ballet,” she realized, “It's much more suited for my body type and demeanor. I knew it was a better place for me."

“The decision to dance was completely my own, but it was also something I was clearly good at,” reflects Gerring, “As a child, I had been searching as a child for something I was good at. Dance came to define me.” After her summer at Idyllwild, her family moved from southern California to Seattle for her father’s new job. Trouble with the move increased her desire to delve into dance, so she intensified her training with classes at the Cornish College of the Arts. Here she was introduced to the Graham technique. She then went on to study at Julliard, making the move she always wanted to New York City.

Since she did not have a teacher to set an audition piece on her, that dance was her first taste of choreographing. However, choreography was not her interest. Gerring wanted to dance with the Paul Taylor Dance Company. Despite the necessity of composition classes and the knack her teachers suggested she had for creating movement, she simply wanted to be a dancer. “A choreographer?” she would think, “that's not a fun job at all!” After graduating from Julliard, Gerring took about five years off and became a cyclist. She came to enjoy the fitness and athleticism that was so familiar, but came without the body image issues that came with dance. She was also working as a waitress, where she met our own Editor-in-Chief, Christine Jowers. Eventually, Gerring decided to take class again and would just go into the studio and start improvising. As she decided to reenter dance as a creator, she realized she had lost many of her contacts. She had to rebuild her audience. "It was lonely for a number of years," she recalls.

This phase of disconnection is in fact what she would call her most challenging artistic period, particularly amidst the common trial and error of any choreographic career. "I didn't have any positive reinforcement for a number of years," she discloses. From auditioning for New York Live Arts' (then Dance Theater Workshop) Fresh Tracks five times to not having a relationship with dancers who could perform her work, her reintegration into the dance world was a struggle for her. Despite that, she has always enjoyed making dances with people. That passion along with the birth of her first daughter, in the midst of this phase of questioning, served as her foundation and saving grace.

In fact, Gerring’s family often filled the void left by the lack of dance kinship and support she experienced. She was also grounded by the memory of the words of Julliard professor Doris Rudko who mentioned to her after a performance, "You're a choreographer. You've always been a choreographer." Slowly but surely she indeed rebuilt her dance community while creating work that was informed by her love of ballet, her cyclist's athleticism, and her instinctual crafting of movement. "When you begin creating your own work," she reflects, "you have to have something that's unique to yourself, not just what you've been taught." She began with solo work, then invited dancers to perform in duets, then trios, and eventually her company fell into place.

Gerring admits that she has witnessed the most growth and acclaim in the past five years, making it a fitting time to be nominated for an illustrious Bessie Award. Her nominated work, glacier, was the first piece she was commissioned to create in a proscenium theater. Prior to that, she had created three pieces in five years with the support of the Baryshnikov Arts Center. Montclair University’s Executive Director for Arts and Cultural Programming, Jedediah Wheeler, commissioned her after seeing her work at BAC. The technical residency that came with the Montclair commission is what made it possible for Gerring to shift her thinking from a black box, like BAC’s 100-seat space, to a “real theater.” She acknowledges the difficulty in that technical layer of the creative process. “You don't learn about that stuff in composition class – lighting, staging – and usually you have twelve hours in the theater then the next day is the show,” she recognizes, “There's a learning curve there."

glacier is atypical work for Gerring in many ways. She often begins creating work with a set of parameters. In this case, she confined herself to creating gestures first. As a self-described “full body mover,” she does not commonly work with gesture. These gestures were also deliberately pointed with fingers or elbows, signifying a shift in Gerring’s creative relationship to the audience. Along with the gestures, she created a “glacier phrase” that was slow moving with lots of stillness, again somewhat foreign elements to her work. This was all inspired by a piece of music long-time collaborator Michael Schumacher shared with Gerring early in the creative process. The music was composed using field recordings from Schumacher’s stay in the Nederlands and Colorado, near a Glacier Lake, hence the name of the work.

This music was Gerring’s constant guide through the creative process. While Schumacher did make a number of edits for the finished dance, the original piece of music served as her anchor. One of the most important realities of glacier, is the team that made it possible. That team also includes Montclair University Lighting Designer Robert Wierzel, who she was admittedly apprehensive of at first. Gerring often thought of her work in the postmodern, minimalist way and saw lighting as a conflict. “The best way to look at dance is at daylight in the studio,” she would say. However, Wierzel understood her aesthetic and showed Gerring how lighting could make the work better and contribute to the vision and statement. He also offered design and set ideas that were “perfect.”

This team allowed glacier to manifest Gerring’s ideal performance experience. “Performance is when all the lights, sounds, and everything come together,” she says, “It doesn’t always happen that way, but ideally it’s that clarity of vision.” glacier demonstrated that clarity and after two years of development, this work pushed Gerring forward into the next level of her work. It took her out of her comfort zone into a new venue, space, and dimensions both literally and figuratively. By the end, she could not help exclaiming, “Whew! I made it to the top of the glacier.”

"It's so hard to make a dance,” says Gerring, “In this age I don't know how anybody does it, overcoming the logistics and finances, not to mention putting it on. I think it takes a lot of courage to be any kind of artist." It is indeed courage and passion that have pushed her through her artistic journey to a Bessie Award nomination. Any job in dance requires love and passion, she so honestly acknowledges, "There are no good jobs. It’s such an impoverished field." Ironically, she is working on one of the Lamentation Variations, part of the 85th anniversary celebration of Martha Graham’s iconic solo by the Martha Graham Dance Company. Perhaps the struggle of creating dance will find its way into her lament.

And what is Liz wearing to the Awards Ceremony? Well she’s not sure, but it may involve motorcycle boots or black Nikes. Either way, she’s sure her dancers and her team will outdo her. After all, they too are the stars of glacier and it would not have been possible without them.