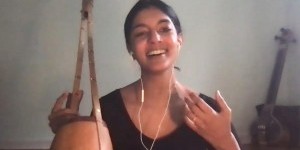 Dance is all Around Us: Talking Specifics about Site Specific Work

Summer in New York wouldn’t be the same without a Mister Softee ice cream cone, the pungent scent of garbage, and the annual trek to Coney Island. Coming across dance has also become part of summer in the city. Performers can be found in parks, on rooftops, and even atop a docked ship.

Site-specific works take a prime-time slot in summer dance programming. Venues close or slow down for the season, but ambitious artists do not. As for New York, it’s not choreographers’ only playground. Their dances inhabit places like the Berkshires, Detroit, and Marfa. By bringing dance out of the theater, artists can reach wider audiences without the steep cost of a traditional theater run. In turn, they make dance more approachable, sustainable, and, dare I say, fun.

While dancing outside the theater isn’t a new concept, it aligns with current economic realities — funding is shrinking. “The most resourceful artists will use whatever they have on hand whether it’s their hallway or backyard,” says Danspace Project Executive Director Judy Hussie-Taylor. “Working on site is a by-product of the shifting economics in dance, but in the most positive way.”

Yerushalmy and her four dancers approached their latest work with a sense of play and curiosity reminiscent of site-specific pioneer — the late Trisha Brown, who also faced financial and curatorial challenges early in her career. “I was excluded from traditional theaters . . . because of the economics of dance, so the streets became one of the few places I could do my works,” Brown says in Susan Rosenberg’s Trisha Brown: Choreography as Visual Art.

One of those works was Man Walking Down a Side of a Building. In 1970, Brown and friends devised an event where Joseph Schlichter traversed down an exterior wall of a seven-story building using climbing equipment and a rope-and-pulley system. Each time this dance is revived, it draws crowds of gobsmacked onlookers.

This past weekend, TBDC shared “In Plain Site,” a compilation of site-specific dances at The Clark as part of the The Jacob’s Pillow Festival. “Today, these works are still incredibly engaging and informative,” says associate director Carolyn Lucas. She indicates many viewers declare a deeper understanding of Brown and her later repertoire because of them.

To the uninitiated, contemporary dance can be daunting. Context, communal places, and nature are all helpful elements to engage wary audiences. Melissa Riker, choreographer of Kinesis Project, brings her dances to unconventional spaces to dispel the art form’s mystique.

Drawing an audience may not be as pressing, but building a dance outside of a traditional performance space is not without challenges. Kinesis Project recently remounted Secrets and Seawalls aboard the Wavertree, a restored 1885 cargo ship in the South Seaport. “It’s our hardest process yet,” Riker says. “On a ship, everything is in place for a reason. If you accidentally touch the things that are off limits, you could be endangering many people.”

Eiko, known for her stark dances that examine humanity and nature, appreciates the agency that the site-specific mode offers audiences. “They could have nothing to do with me or the presenter, and have the opportunity to stay or go,” she says. She points out the unpredictability: Every location is different, and Mother Nature has a mind of her own. Hussie-Taylor recalls witnessing River, a work Eiko created with her partner Koma, in Colorado after a monsoon rain. “In the dark of the night, we watched Koma disappear into the rapids of a dark creek. I’ve never forgotten it.”

If you find yourself making a beeline to the train or engrossed on your phone, remember to look up occasionally. You never know — you may walk into something profound that changes the way you see the world around you. Or, at the very least, encounter a delightful distraction.