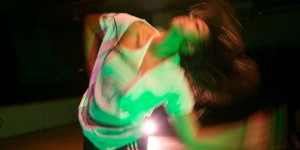 IMPRESSIONS: marion spencer & collaborators in “to love the rise/pt. 2” at Roulette Intermedium

An Invitation into the Process of Making Dance

Making a dance can be a hermetic endeavor as work isn’t usually revealed until its creator feels like the piece is complete. Really complete.

While it’s understandable to be apprehensive of unveiling choreography for the first time, the discourse surrounding the process of dance-making is essential, and so is bringing us closer to it.

One way dance makers introduce their unfinished work is through in-process platforms. These include Gibney’s ShowDown, WAXworks, and Green Space’s Fertile Ground, among others. But none are quite like Danspace’s DraftWork. Incepted in the mid-1990s by Laurie Uprichard, DraftWork has been curated and moderated by Ishmael Houston-Jones for the past ten years. The downtown dance icon runs the program much like his choreographic endeavors — improvisatory and loose to keep the Saturday afternoon program fresh yet moving along.

The afternoon begins with the two featured artists — their projects range from early-stage ideas to near completed works.

Houston-Jones invites the audience, who includes frequent dance-goers and inquisitive locals, to ask questions and share impressions. Inquiries range from academic-like analysis to the simple: ‘what did it all mean?’ Before people begin to get fidgety, viewers are welcome to join the choreographers for a wine reception.

“It gives the audience the opportunity to learn what it means to make a dance rather than sitting passively,” says Houston-Jones. “I think it’s important for the choreographers to hear from the audience – what they’re getting . . . and not.”

For Spencer, that comes in the form of physical exhaustion, in WOLF. Flinging her spindly limbs, she propels through the cavernous space embodying rage, mourning, and exultance. Her body heaves with dichotomous grace.

WOLF embodies the dualities of the female spirit through evocative symbolism and brims with arresting images. A camping tent set up in an upstage corner soon becomes the cape of Diana, the goddess of the hunt, a burka, then a chrysalis — these are a few notions that come to audience members’ minds. When Spencer dons a headlamp and flannel shirt, one viewer sees a “documentarian.” Another attendee was reminded of the Hindi goddess Kali as Spencer wrestled with her tent’s balloon-like fabric. These strong reactions suggest that the artist is well on her way to a formal premiere.

“It feels like it’s nearing the end. Well, a work is never really complete,” says Spencer, “So it feels like WOLF is nearing its heart.”

In contrast, Drake’s Community Exercises for Sanctuary Spaces approaches exertion through text and repetition. It is also a coming out of sorts – not that type of coming out, though exploring queerness is deeply couched in the work. Here, Drake commits to vocabulary he has experimented with in his last two dances. This includes self-referential anecdotes, pop culture (Sandra Bernhard’s monologue from The King of Comedy is present), and quotidian movements punctuated by a flurry of leaps and high kicks.

The sextet performs satisfying symmetry, in the manner of punk rock Rockettes, throwing a Fosse hip-jut and a post-modernist jaunt for good measure. It’s all done with a wry, winking tone. During the talkback, Drake affirms this assessment, “I’m allowing the dance to get subterranean — to get to the underbelly of what I live in . . .”