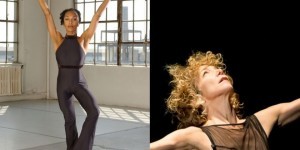 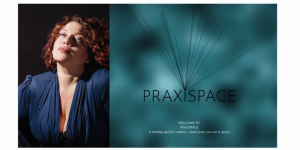 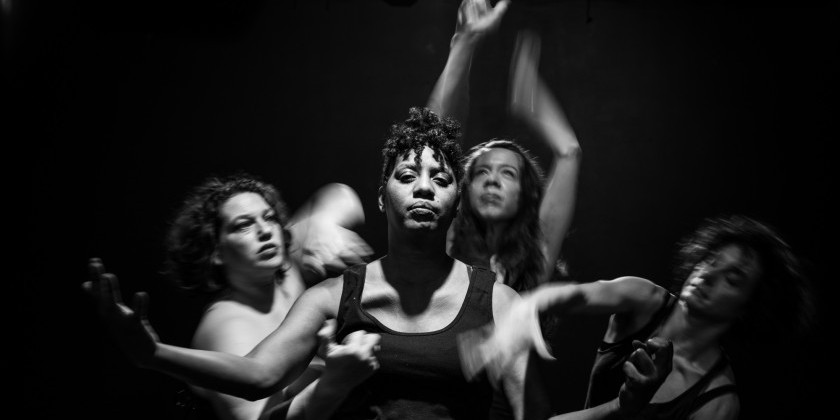 The Theater at Gibney 280 Broadway

“I feel like love is what we call the thing that all this other stuff feels like,” choreographer Kelly Bartnik says to me during a rehearsal of her upcoming Fuck/Love, which will premiere at Gibney April 11-13.

“The other stuff” is Bartnik’s gold. She lights up talking about it — passion, power dynamics, a buzzing attraction, a devastating urge, a held breath. Adoration — a perplexing, inescapable, addictive feeling. A physical feeling that is then described and negotiated through words. 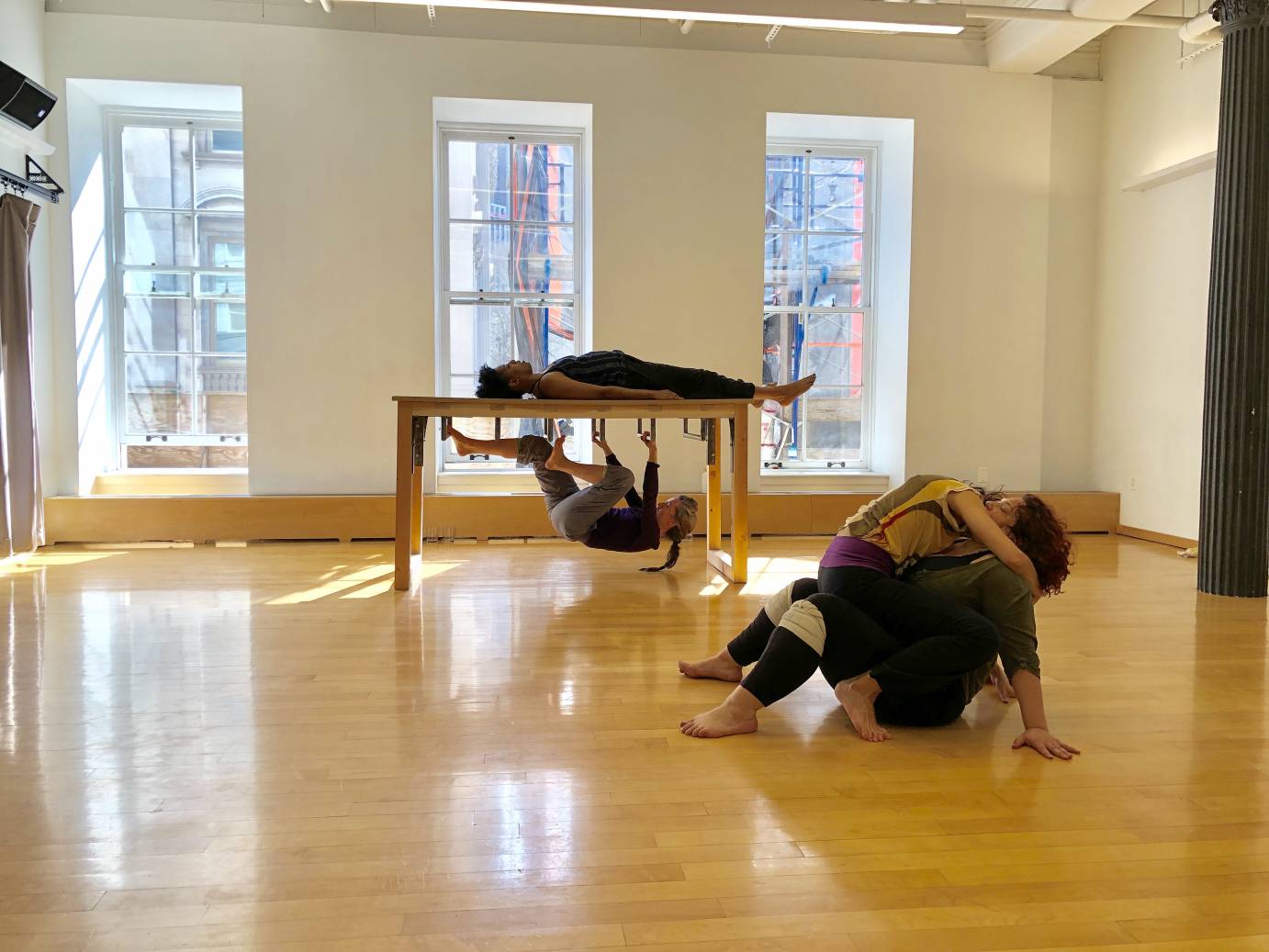 While Bartnik was in graduate school at Wilson College, an idea came to her. In her mind, she pictured two bodies side by side engaged in a repetitive physicality, perhaps a thrust of the arms from the chest or a rocking on the knees. One person’s physicality could be sexual in nature, the other’s more aggressive. The implicit experiment was to see what kind of language (vocal sound) emerged from pushing the body through such extreme repetition. She could see it clearly in her mind and was anxious to try it in a studio.

She chose longtime mentor and colleague Alexandra Beller for the task. They set the clock for ten minutes, positioned themselves side by side, and began. What emerged from their bodies and mouths ran the gamut of memory and experience: from orgasm to rage, from demands to apologies. When the ten minutes were up, they couldn’t stop laughing.

After they left rehearsal, they couldn’t stop texting each other. “I felt sort of buzzy all day,” Bartnik told me. “It was transformative, cathartic,” Beller confirmed. When trusted friend Marya Warshaw observed their second day, she agreed that they were on to something raw and evocative. After showing me this section in rehearsal, I am buzzing too. It exposes not only the performer but the viewer. All my memories turn out in front of me, and I’m pretty sure I’m blushing. 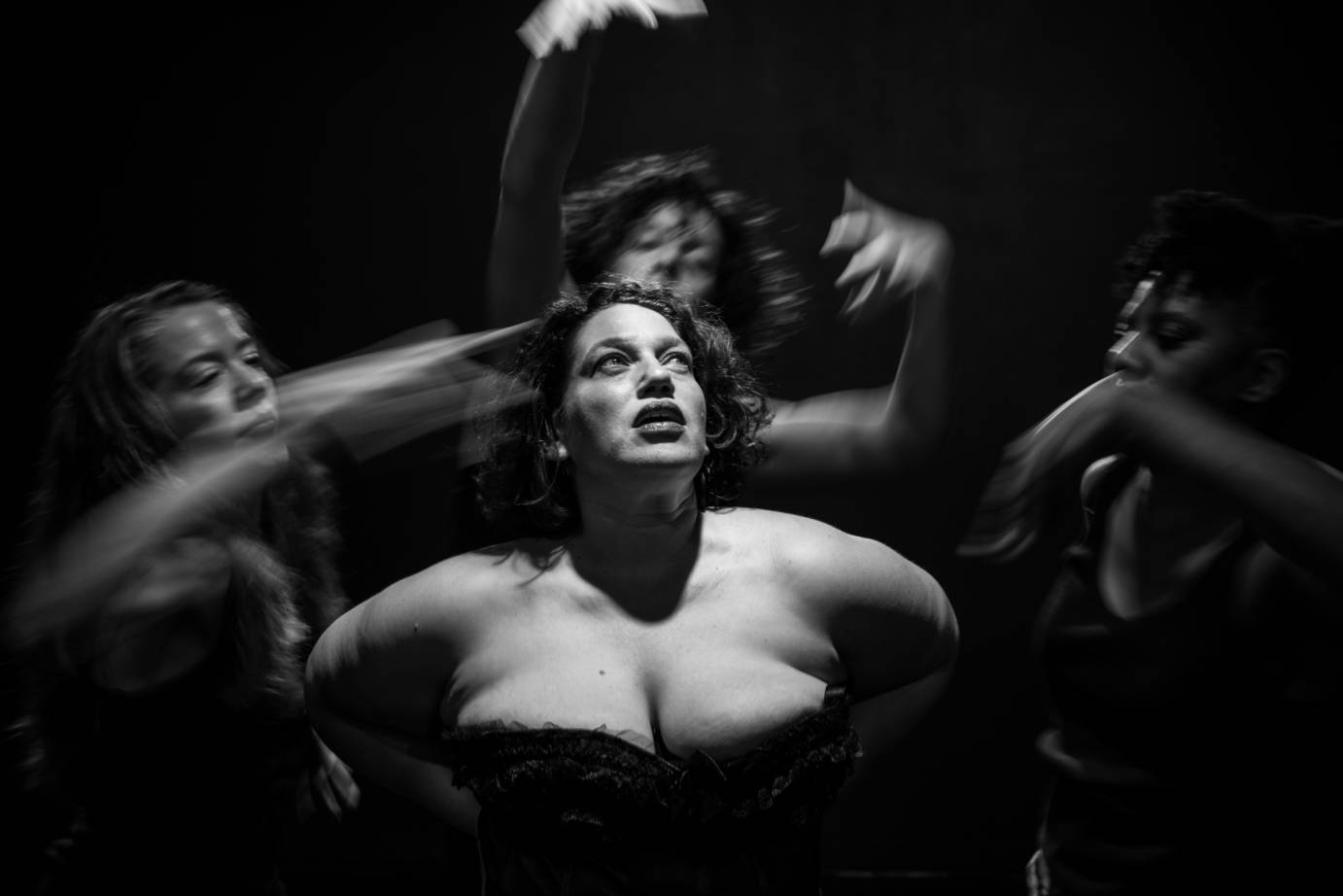 Even still, they are looking for more. Bartnik asks Beller if there are more sounds and actions she has yet to dig out.  Having just screamed it, moaned it, sighed it, and cried it, Beller responds, “There are “fucks” I can always find. But there’s something about the momentum, the complete ongoing of it . . . my excavating from other parts of my body gets cut off.”

This core vignette of Fuck/Love begins an exhaustive exploration of the way intimacy manifests in language and physicality. Building material through improvisation, Bartnik and team combine movement with common phrases while shifting their vocal intonation and context. In one section, performers balance in twisted positions on a confined table top saying, “please,” as they fluctuate their tone, speed, and volume. In another moment, they work with “lustful insults” or “hateful compliments.” Watching the many colors that emerge from single words (desperate one minute, commanding the next) raises questions about the seeming infinite interpretations of expression. Can we ever be sure that a body outside of ours is understanding what we feel? Are there times when language is accurate and others when words are entirely powerless? 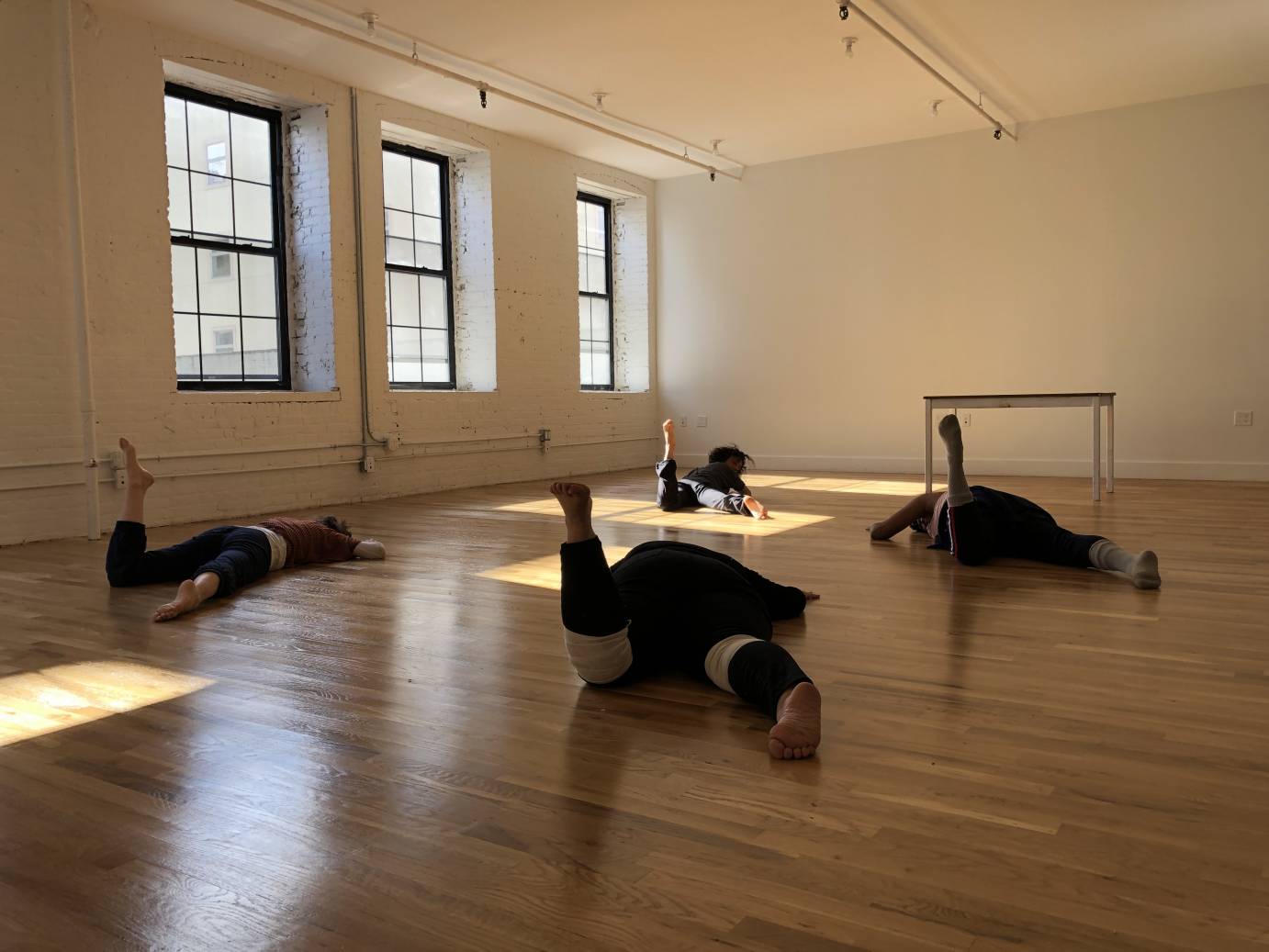 Bartnik travels into places in the body that dance often does not go. Despite the inherent connection of dance to carnal instincts (both so linked to innate somatic knowing), rarely is sexuality and emotion this visceral on stage. Phrasework and partnering include recognizable intimate connections like a body mounted on top of another face to face, rather than abstractions. Bartnik is not interested in playing it safe, nor is her team of confident female collaborators.

Beller, along with Donna Costello, Sara Galassini, and Penelope McCourty, exhibit the remarkable but necessary vulnerability in the process of Fuck/Love, whether twisted in a tight embrace, sharing breath, or just chatting in the rehearsal room about their personal experiences of love and language. “There’s something about this incredible group of women that is seasoned in the same way . . . we are on the same page with our experiences,” Bartnik explains. 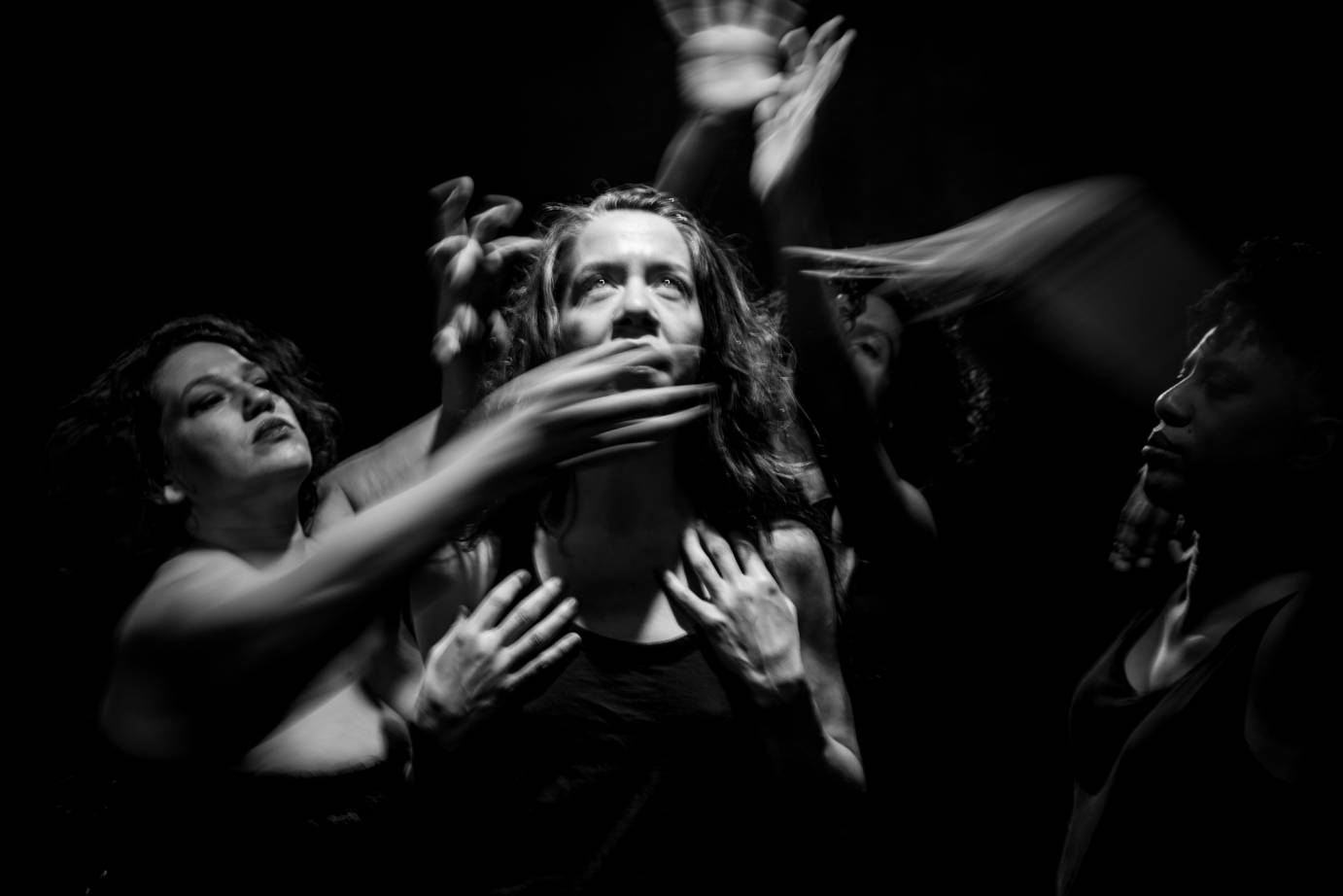 “The soul of it for me is this guttural thing you have with someone where you want to rip their head off, but you can breathe better when they are around — these crazy extremes of joy, bliss, and pain . . . what is the physicality of all that?” Accessing these emotions is not a simple undertaking. “The approach is a mixture,” Bartnik says. “Access emotion through the body, or let emotions come first and see how they register physically. Or finally place emotion on top of more arbitrary action.”

Regardless of the method, they find answers by rooting in reality, leaning on instinct and memory. Working on a transition from a tricky intertwined position, Bartnik tells the dancers “do what feels natural.” 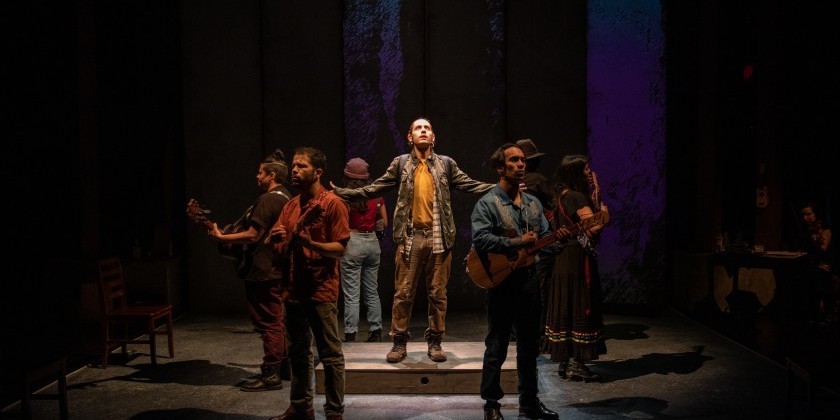 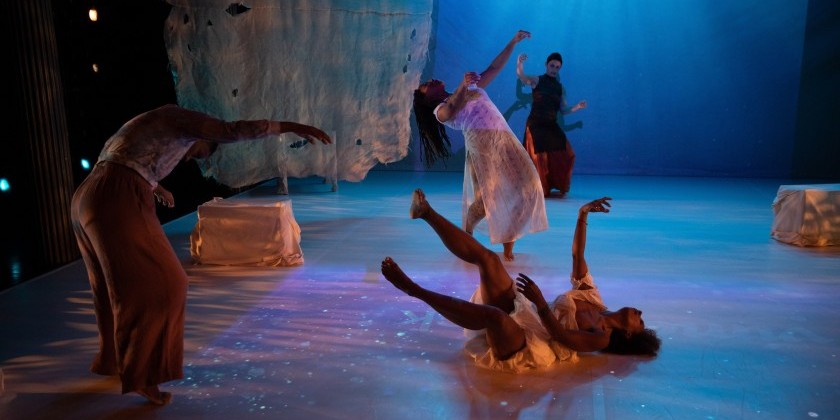 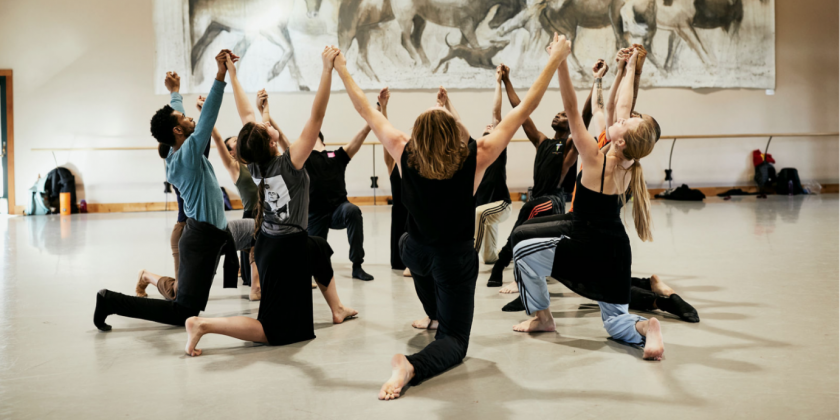 DAY IN THE LIFE OF DANCE: Savannah Spratt and David Glista of the Limón Dance Company Journal "from the Bubble" for The Dance Enthusiast 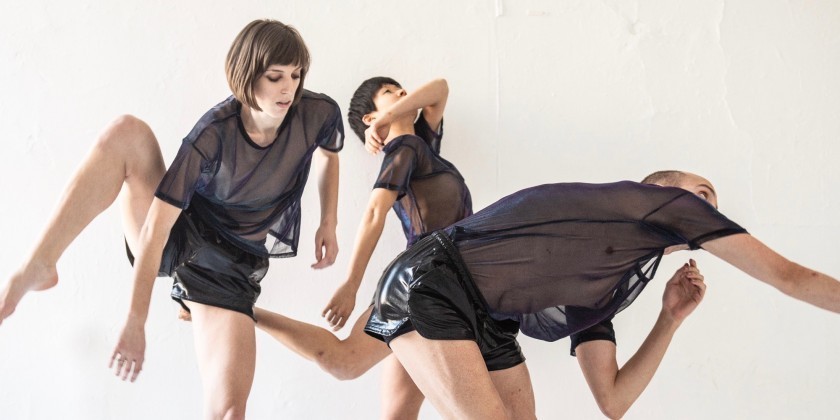 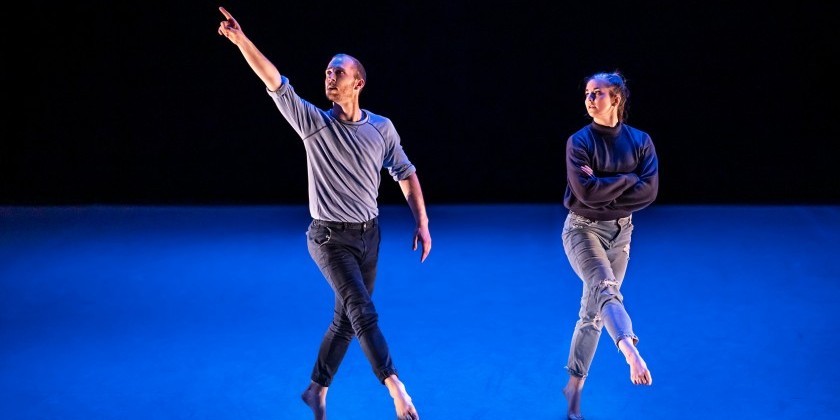 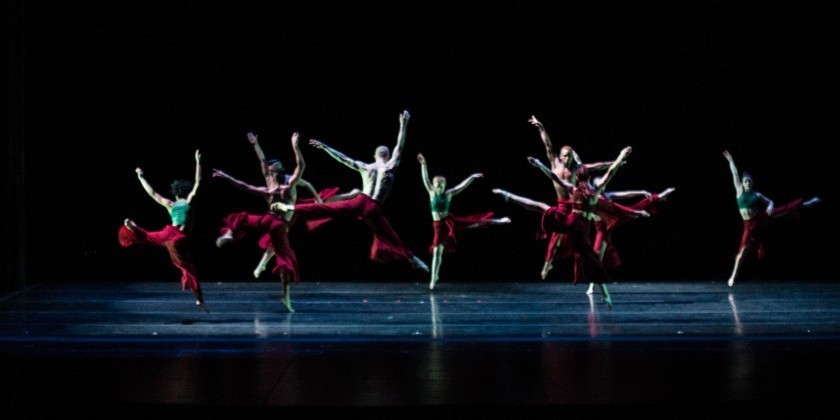