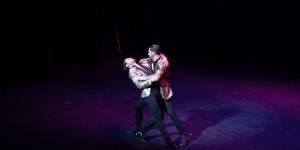 "The Lion, the Witch, and the Wardrobe" Returns to the Stage

“The Lion, the Witch, and the Wardrobe”

The London Blitz. Four children sent to the countryside. A game of hide-and-seek to pass the time. A magical wardrobe thick with fur coats.  The discovery of Narnia, an enchanted land of talking animals and mythological creatures. A White Witch who freezes Narnia into an endless winter. Aslan, an all-powerful lion, who sacrifices himself so a boy may live.

Both fantastical tale and Christian allegory, C. S. Lewis’ The Lion, the Witch, and the Wardrobe received tepid reviews upon its publication in 1950: too moralistic, too violent, too outlandish. However, readers loved it, and to this day, it continues to be a popular book with children and adults.

In 1998, Randy James asked his dance-loving goddaughter what she would enjoy seeing him choreograph. She suggested The Lion, the Witch, and the Wardrobe, and he premiered a version soon after that received much acclaim.

Fast forward to the present day. NJPAC and a grant from the Dodge Foundation gave James the opportunity to overhaul the 1998 version. “I found it an interesting situation to negotiate,” he says. Since the original production, the world has changed, as has James. He’s currently a professor at Rutgers University’s Mason Gross School of the Arts and the founder of the all-male performance troupe, 10 Hairy Legs. “I’m a different artist now. I teach my students to take risks, and it’s a risk for me to redo something that had been successful.”

James didn’t make minor changes; he took the production down to the studs and rebuilt it. “I have all new sets, choreography, and costumes,” he says. Only the music, which is Mozart, remains from the original. James cut characters including Susan and Peter, the two older children, and eliminated everything before Narnia. “It’s more dramatically succinct,” James says. “I didn’t allow myself to do that the first time, but I’m a better dance maker now.”

He’s particularly jazzed about the costumes. James spent “maybe a hundred dollars” on the costumes for the original that were, as he describes, “cartoonish.” His budget increased substantially for this premiere, and these costumes are more elegant as are the sets. Presenters from all around the world are coming, and James says, “I want to make the production values really sharp.”

One of James’ goals for The Lion, the Witch, and the Wardrobe was to successfully combine the action-oriented narrative with abstract movement. Much modern dance exists as nonrepresentational movement that may — or may not — mean something. James, though, didn’t want to go too far in the opposite direction. “I didn’t want to resort to mime,” he says. He read the book again, which allowed him to identify the highlights that he then translated into motion. Purists may frown at not having each scenario literally depicted, but, as James points out, by showcasing the most prominent arcs, the themes can shine.

In the The Lion, the Witch, and the Wardrobe, many of these themes are transparently Christian. The lion Aslan sacrifices himself so Edmund, who betrays his family to the White Witch, may live, thus invoking the crucifixion and resurrection of Jesus Christ. While his Christian faith influenced C.S. Lewis’ writing, James believes the themes transcend religion. Specifically, Aslan’s distressing choice to give up his life to save another resonated with James. “That’s what I identified with: controlling actions, not feelings.”

At the heart of James’ production is a universal enthusiasm for a good story “Our whole world is made up of stories,” James says. The Lion, the Witch, and the Wardrobe is one of the more compelling stories because, as he puts it, “It’s about love triumphing over evil.”