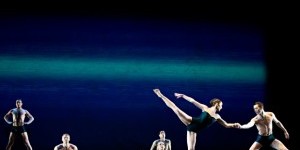 The Company Prepares for its 20th Anniversary Season at the Joyce

Video work by A. Nia Austin Edwards /Written and edited by Trina Mannino

Former Martha Graham dancer, Pascal Rioult, leads his company, RIOULT Dance NY, into their 20th season beginning on June 17th at The Joyce Theater. The Dance Enthusiast recently spent an afternoon with the artistic director/choreographer and his ensemble as they rehearsed the world premiere of Dream Suite and last year’s Iphigenia.

In celebration of the company’s milestone anniversary, RIOULT is presenting a special program -- one that is close to the artistic director’s heart. Program A, Martha, May & me, is an homage to Martha Graham and to Rioult’s first mentor, May O’Donnell. The company will perform O’Donnell’s Suspension (1943), a work in which, “dancers move in a state of suspended balance and order where harmony is maintained by the independent patterns.” Graham’s El Penitente (1940) will appear alongside O’Donnell’s and Rioult’s pieces in the program.

Celebrating 20 Years and Beyond

While Rioult was in the Martha Graham Dance Company he danced El Penitente with Joyce Herring, his wife and RIOULT's co-artistic director, and Kenneth Topping, another renowned Graham principal artist. (Dance luminary, Mikhail Baryshnikov also performed El Penitente with Herring and Rioult.) The three former Graham dancers came together to coach the current RIOULT dancers: Jere Hunt, Michael S. Phillips and Charis Haines. “It was wonderful to pass on a piece that I’ve done,” says Rioult. “I feel at peace about that. I don’t think Martha was totally comfortable letting go of her work, but I feel it’s gratifying to remember it and see El Penitente come alive again in another person.”

Pascal Rioult Passes the El Penitente Torch to his Dancers

The 20th Anniversary season isn’t only about looking back, it’s also about celebrating the company’s future. The world premiere Dream Suite “began with the idea of a contemporary sense of romanticism,” says Rioult, wishing to challenge himself by merging both old and new concepts. Rioult, who employs a Tchaikovsky score for this piece notes, "In my twenty years with the company, I haven’t used such romantic music. I've tried to give the score a newer feel by (making the movement ) very aggressive, rhythmic and athletic.”

In addition to the contrasting moods of the music and dance, Dream Suite will feature contemporary costumes with a twist. Three artists will wear animal masks -- one bull and two birds to be exact -- inspired by paintings of the modern master Marc Chagall. The inclusion of the surreal element showcases Rioult’s playful spirit.

A Minute of Animal Behavior

“I’m looking forward to another 20 years at least,” Rioult says with a laugh. “I’m enjoying my work. I’m not saying it’s easy, but I love to be in the studio with the dancers. I appreciate their energy. I’ve been very fortunate.”