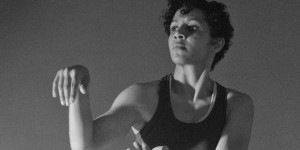 to link to the original article on the St. Louis Public Radio newsite click here.

In the early 1990s, choreographer Bill T. Jones sought to illuminate the AIDS crisis using the language he knows best: dance. Now, the St. Louis-area dance community is seeking to respond with movement to issues unearthed by Michael Brown’s death.

More than two dozen dancers, musicians and related professionals filled Sara Burke’s City Studio Dance Center in the Central West End Thursday night. They were responding to a call by Burke and dancer, instructor and choreographer Keith Williams to begin a “Step Up” project around the Ferguson tragedy.

“Are we willing to step up and be a voice for change?” Williams asked the group.

Williams and Burke are Katherine Dunham-trained dancers, as is Heather Himes, who sat on a blanket on the well-worn wood floor along with a few others. Most sat in a circle of chairs, a circle of healing, organizers called it.

Dunham, a legendary Illinois-born dancer and social activist, in the mid 1940s took many stands, including refusing to perform in the heavily segregated city of Louisville in the mid 1940s.

“That was way before Rosa Parks,” Williams said. “Katherine Dunham was a community engagement artist before it was popular.”

In the spirit of Dunham, Williams and Burke encouraged ideas from the group, around a theme.“The thread would be healing, hope and justice,” Burke said.

Artists ‘turn up the volume’

The night also became a kind of healing process for the dancers, themselves. Some shared experiences as well as personal reactions to the recent events in Ferguson. Several contributed to a list taped to the studio mirror, entitled, “I Must Get This Off My Chest & Heart,” with comments such as “Isolation breeds fear.”

Ideas around a response varied widely. Burke envisioned a collaborative dance performance, perhaps made up of many short pieces by a variety of dance companies to be performed in multiple venues. Many testified to the power of dance.

“Sometimes words can’t define what we want to say,” Dawn Karlovsky said. “Movement is a powerful language.”
“Take the dance to Ferguson,” someone offered. “Invite the youth of Ferguson to participate,” another said.

“It doesn’t even have to be about dance; it could be a food bank,” another volunteered.

Malena Amusa had an idea inspired by a recent social media phenomenon. “A kind of ice-bucket challenge,” Amusa said. Dancers from different cities would create work in response to Ferguson and post videos on Facebook.

Amusa also told the gathering about being part of recent protest in Ferguson. She and others from her African dance school began performing in the protest line, significantly altering the mood of that gathering.

“You could see angst turn to joy,” Amusa said. “That’s what artists do. We add life. We turn up the volume of what’s already happening.”
The City Studio crowd began to thin as the event neared the end of its second hour, and remaining attendees learned a short but powerful "Hands Up, Don't Shoot" piece, choreographed the day before by Williams and Burke. It was a seat-of-their-pants effort, initially sketched out through text messaging and then fleshed out over dinner. “Using the Dunham method,” Burke noted.

Their choreography may serve as the "seed" of a larger work. Burke’s take-away from the evening was that there is strong support for a series of free dance performances in underserved areas, to take place over a year’s time.

The group plans a second meeting at City Studio at 8:15, Thursday, Sept. 18 to discuss short- and long-term goals. Organizers are exploring funding sources to support their “Step Up” efforts.